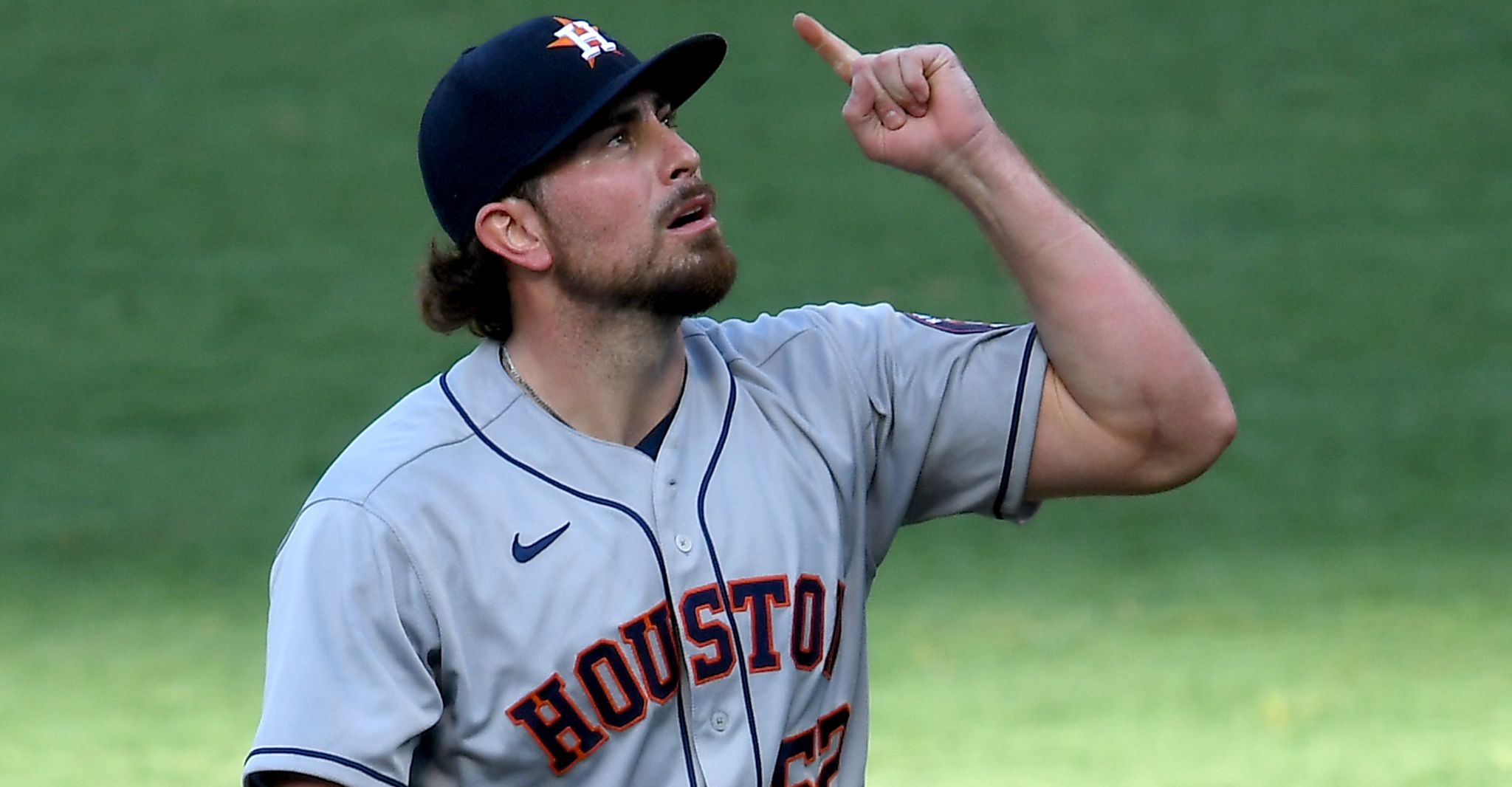 Your Houston Astros are in the playoffs this year, and will be the first under .500 ball club in history to do so. That record is due in large part to their inability to win 1-run ballgames, and with the traditionally quick hook on starters in the postseason, this unproven bullpen will be relied on. In this piece, I’ll attempt to run through a quick overview of the Houston Astros’ bullpen options going forward, and the structure of that position group. Surprisingly, some of these rookie arms have emerged as legitimate options, not least of which being…

After his first three starts at the beginning of the year, I wrote about Cristian Javier at length here. All of the points made in that original article still stand, but Javier will certainly be bumped from the 5th spot in the rotation to fill a multi-inning relief role for this postseason, similar to Chris Devenski’s role in 2017 or Andrew Miller during the Cardinals runs. Javier has been excellent as a starter this season, finishing with a sub-4 ERA, good peripherals, and a WHIP of 0.99(!) while getting his feet wet in the Majors. Most importantly, Javier did not give up an earned run in either of his relief stints this year, and looked flat-out dominant against the Dodgers in his two September innings with 5 strikeouts in 7 batters faced. If a starter gets in trouble, expect Javier to bridge the gap. Luis Garcia presumably waits in the wings as the low-leverage long relief option.

It’s hard to argue with the production that Andre Scrubb has provided this year, but not impossible. While his 1.90 ERA and 9.1 K/9 this season indicate a dominant, run-preventing setup man, the 7.6 BB/9 and nearly 1.5 WHIP are almost record breaking and in a bad way. Couple that with poor peripherals in regards to SIERA and FIP, which show that Scrubb has gotten lucky this year and this luck is unlikely to continue through a 162-game season. Additionally, he is a two-pitch pitcher, who are particularly susceptible to the long ball. Home runs may be a death sentence against the bomba squad. However, this is not a 162 game season, and who is going to hit this cutter or this wizardry of a curveball? He only has to get out of these bases loaded jams he creates through the walks for a few more series.

It’s no secret that Enoli Paredes has quickly become a fan favorite. And how could he not? Here’s Enoli just three months ago:

A starter that ended up with the AA Hooks last season, he’s now pitching high-leverage innings for a playoff team. Paredes is a flamethrower at only 5’11, and one that fits the Astros typical mold. He has high active spin rates, in the 90th percentile for the curve + slider, and 75th on the fastball that reaches all the way to 99. Paredes figures to be right behind Ryan Pressly in the pecking order, and has been a much-needed stopper for most of the year. Plus, he’s fun. Look at that kid get fired up.

Raley may be the first effective lefty specialist to find their way to Houston since Tony Sipp, a name I shudder to even mention. Acquired from the Reds for a PTNBL (who has still not been named), Raley has produced extremely well in his limited outings with Houston. In only 8.2 innings of work Raley, along with Javier, has kept his WHIP below 1, at 0.95, and his baseballsavant sliders are incredible to look at. Despite his lack of fastball velo, Raley tops the major leagues in practically every category relating to weak contact. In fact, he’s the absolute league leader in allowing the lowest exit velocity (minimum 250 pitches). He also fits the Astros mold for the future, with a 2600 RPM cutter and two breaking balls around 2900 RPM, good for 94 and 93rd percentiles in the league, respectively. Raley is much more effective against lefties, but can also be used as a multi-inning stopper in desperation.

I do not mean to mince words about this; Blake Taylor has been a revelation, and provides a secondary backend reliever that would not exist otherwise with Brad Peacock’s health and Josh James’ uncertainty as he undergoes isolation under COVID precaution. Taylor was acquired in the Jake Marisnick trade with the Mets, and has been incredible in inducing soft contact all year. Like all pitchers of his type, his peripherals indicate some regression in a 162 game season, but this is not a 162 game season. Taylor allows an average exit velocity of only 83 MPH, good to be in the top 1% of all pitchers. Walks are somewhat of an issue with Taylor as well, although not to the extent of Scrubb. The xERA of 3.01, however, shows that the man simply has not allowed hard contact all year, and will look to induce flyball outs in the postseason as well, fulfilling the late-inning high leverage role alongside Enoli Paredes.

And to close it out, we have the de facto closer in Ryan Pressly. Pressly has not been lights-out this year, but in my opinion his struggles have been exaggerated in large part to some truly horrible luck. Pressly still has the highest strikeout upside in the organization, with a 12.4K/9 remaining completely elite. Additionally, he is carrying a 2.61 ERA through the month of September. Converting only 12/15 save chances is not exactly ideal, but Pressly remains one of the game’s elite relievers, and he appears to be rounding into form save for a hung slider to Ronald Guzman. If the first round comes down to a Ryan Pressly – Taylor Rogers competition of who can slam the door harder, I like the Astros chances.

Josh James is good to go (as in does not have covid, thankfully) , and will be slotted right into the high leverage backend role he has been run out all year for. Much maligned at the beginning of this year, you may be surprised to hear how successful he’s been lately. After being seemingly unable to get through a clean inning, his IL stint has evidently done him wonders, to the tune of a 1.35 ERA in September. He looks sharp, attacking the zone in ways he seems to do sporadically. His lone earned run came off this fluke of a double, and if you’re in the crowd that rolls their eyes when he jogs to the mound I recommend you get used to it for at least two more games. James will be used in high leverage, and is the only pitcher not named Ryan Pressly on the roster with any sort of big league experience.

I expect for these relievers to be the only names you see in the first series against the Minnesota Twins, unless something goes horribly wrong for either team. While injuries and underperforming have cost the team dearly over the first 60 games, the bullpen remains pivotal to postseason success, as always. It will be so fun to watch these kids try to go out and prove how for real they can be.

Thank you for reading. Go ‘stros.