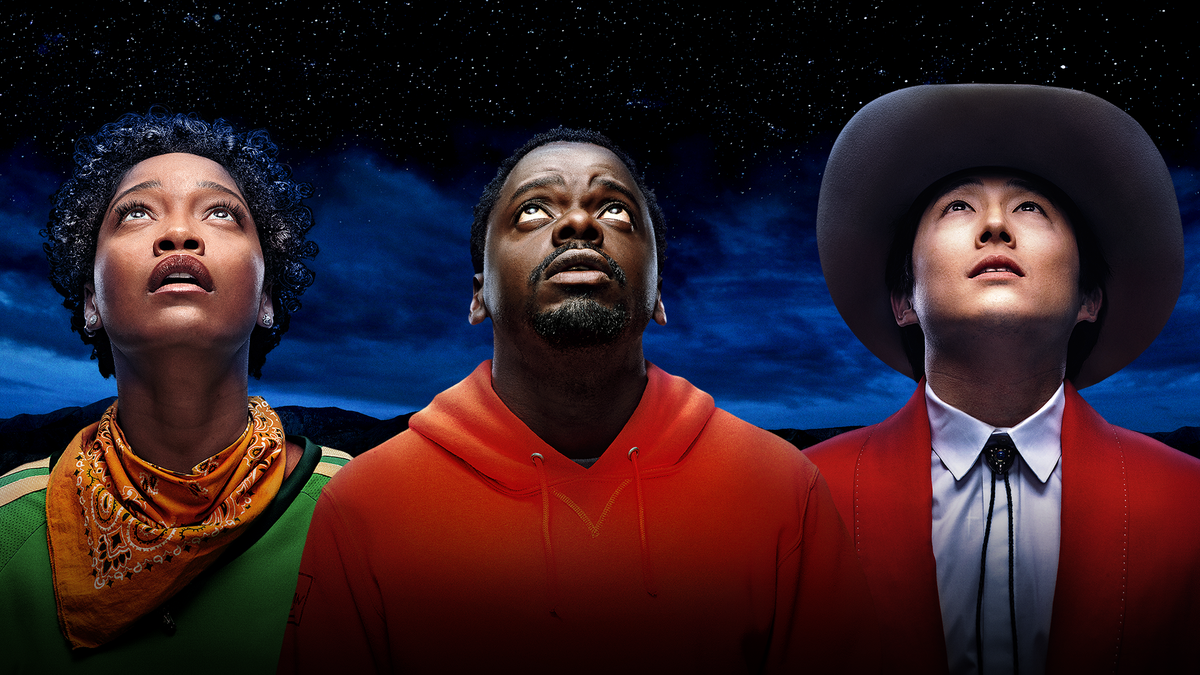 “Then the LORD commanded the fish, and it vomited Jonah up onto the dry land.”

If you’ve seen the movie NOPE, the new sci-fi horror/thriller from Jordan Peele, and you’re anything like me then you’re probably asking yourself a lot of questions.

I’ve watched and read some of that content, and a lot of it is quite plausible. It’s also by design. Jordan Peele has built a reputation for himself as a director who “challenges the audience” and gives them just enough hints at subtext to create their own theories about his movies and figure out what to take from them. Which is kind of cool, I guess. Why waste your time trying to definitively make your own point when you can just sit back and collect millions of dollars while nerds on Reddit make better points for you? Good work if you can get it.

Anyway, the theory starting to crystalize among the movie nerds about NOPE’s ending and deeper meaning is that the film is a meta-commentary on SPECTACLE! According to these fans, the movie is itself a huge spectacle designed to warn us about how our culture of monetization of spectating on spectacles is literally consuming us, stripping us of our humanity/empathy, and costing us our lives. Woah. So deep.

The theory is obviously plausible. Probably even correct. Any number of YouTube video essays or explainer articles will give you plenty of pieces of evidence backing it up. The monkey subplot, the UFO, TMZ, the random characters who show up and are just never mentioned again, the shoe, all of it connects to this brilliant, galaxy-brained meta-commentary from your favorite director.

Plus, Jordan Peele and the marketing team behind the movie NOPE beat you over the head with the word “spectacle” to the point that it’s almost impossible to talk about this movie without repeating the word over and over. “Spectacle” is in the bible verse that shows at the beginning of the film, it’s used in the trailers, it’s used by multiple characters throughout, and it’s been used in the press tour leading up to NOPE’s release so much you just can’t escape it.

There’s also some stuff about how we make spectacles of Black entertainers and then discard them forever which makes a lot of sense and would be a very commendable point for Peele to make. But, to summarize, everything that happens in NOPE can be viewed through the lens of Jordan Peele critiquing you, a big dumb idiot moviegoer, for giving him money to come watch his UFO movie. Go outside, nerd!

I have a much simpler theory that ties everything together for those of you who left the movie theater feeling empty, confused, and wondering what it was all for.

The end of NOPE just isn’t good. Plain and simple.

The movie isn’t hard to understand. You don’t need to read a bunch of fan theories to have the “NOPE movie explained” to you. It’s all right there looking you in the face, it’s just not a good ending and you’re absolutely justified for not liking it.

NOPE starts out slow but Peele masterfully builds the tension and suspense by only giving you the slightest hint of what’s going on. Daniel Kaluuya, Keke Palmer, and Steven Yuen all give great performances. The cinematography, sound, and score are all incredible. And similar to Jaws and other horror classics, he doesn’t show you the whole shark for a long time and you’re left to fill in the blanks yourself and create a horrifying theory of your own.

The problem is, by the end of the movie NOPE the entire shark, so to speak, is staring at you for like 45 minutes and won’t go away. And it lets you realize that the object of the scary idea you had in your head isn’t scary at all, is actually kind of stupid, and surprisingly simple to resolve.

Maybe for some the idea that there’s a simple resolution for these problems is enough to make a movie good. But for me, it just felt like a deliberate waste of my time. And a waste of what could have been a really good movie.

NOPE isn’t a bad movie overall. The first hour and a half is incredible filmmaking, which makes the last act so disappointing to me. I haven’t seen US but that seems to be the general consensus around that film as well. Jordan Peele fumbling the ending of 2 of his 3 directorial features to this point isn’t exactly a great sign. But I’m still intrigued to see what he does next.

Grade: C
Recommendation: If you were already excited about this one, I’d still recommend going to a theater to see it. But if you were on the fence about it, go ahead and wait until it’s streaming.

You can follow Apollo Media’s brand new official Pop Culture account @WatchWithApollo. You can follow the podcast One Take Pod as well @1TakePod on Twitter. Listen now wherever you get your podcasts. Our latest episode is re-examining some of our previous movie grades, which I may end up doing with NOPE. Check it out & subscribe.