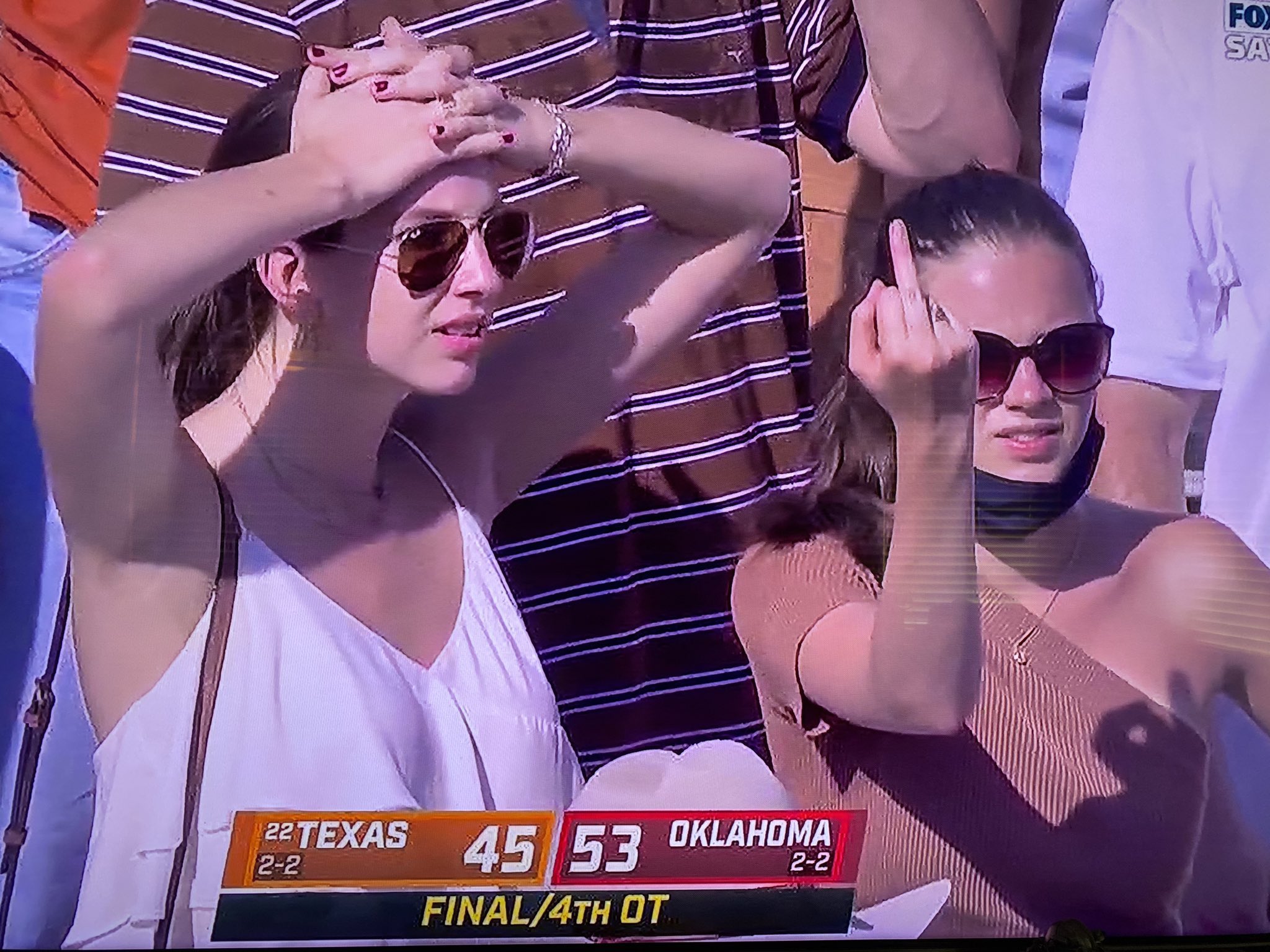 This marked yet another wild finish between Texas and Oklahoma in the Red River Showdown, a game that has become well known for its lack of defense over the last few years. Well, they certainly lived up to those expectations today. A back and forth game that looked like it was going to be an easy win late in the fourth quarter for Oklahoma ended up going into quadruple overtime and nearly hit the 5-hour mark. Despite Texas fighting back from the dead yet again, Oklahoma was yet again a recipient of the Golden Hat, as they were able to come away with a 53-45 victory over Ehlinger and the Longhorns.

While this game was mighty close, I must remind you not to mistake a tight game for a good one. Texas opened the game where they left off last week against TCU with a Keontay Ingram fumble and a three-and-out. Oklahoma jumped ahead 10-0 early. However, it wasn’t long until the heat and pressure of this game caught up to freshman quarterback Spencer Rattler. He turned the ball over on two consecutive possessions, including a brutal fumble that led to him being taken out of the game for backup QB Tanner Mordecai. Texas tied it up 10-10 and two possessions later, it was a 17-17 game. Sam Ehlinger had a chance to give Texas the lead going into the half. After a strong drive, Texas committed 1 of their 11 penalties on a false start that backed them up out of field goal range. The score was tied at 17 after a very rough half for both sides.

The second half was a little less sloppy offensively, even though neither team played with much discipline the entire game. Oklahoma coach Lincoln Riley inserted Spencer Rattler back into the game after he was pulled in the first half and Oklahoma jumped up 31-17 after two consecutive touchdowns which included a long 17 play, 88-yard touchdown drive. The Sooners were 8-18 on third down for the day including two key ones on that touchdown drive that seemed to be a huge gut punch for Texas late in the game. Rattler had time and was able to move the ball down the field, while penalties and a lack of protection for Sam Ehlinger prevented Texas from doing virtually anything offensively in the third and most of the fourth quarter.

Texas then showed the country how they were able to win two games earlier in the year and put on an absolute display on offense and defense to score 14 points in less than 5 minutes to send the game into overtime at 31-31.

Texas got the ball first to start overtime and were able to march into the end zone fairly quickly, but Oklahoma answered right back with a touchdown of their own. Both teams scored yet again in the second overtime, but the third overtime was where things became a little interesting. Oklahoma’s defense forced Texas to setup for a field goal, but the kick was blocked, giving the Sooners a chance to win the game with a field goal of their own. Oklahoma set themselves up for a 31-yard field goal. It seemed all but over for Texas, but Oklahoma kicker Gabe Brkic shanked this field goal so far to the left I’m not sure it would’ve gone in if he teed it up from the sideline. Unfortunately for Texas, Oklahoma got the ball back and scored right away on the ensuing possession and got the two-point conversion, setting Texas up for a do-or-die situation in the fourth overtime. Texas had the ball on the OU 9-yard line, but another holding call moved Texas back to the 19, where Sam Ehlinger threw a game-sealing interception on the final drive of his career against the Oklahoma Sooners.

Sam Ehlinger finished his career 1-3 in the Red River Showdown and Oklahoma has won 9 of the last 12 meetings between the two.