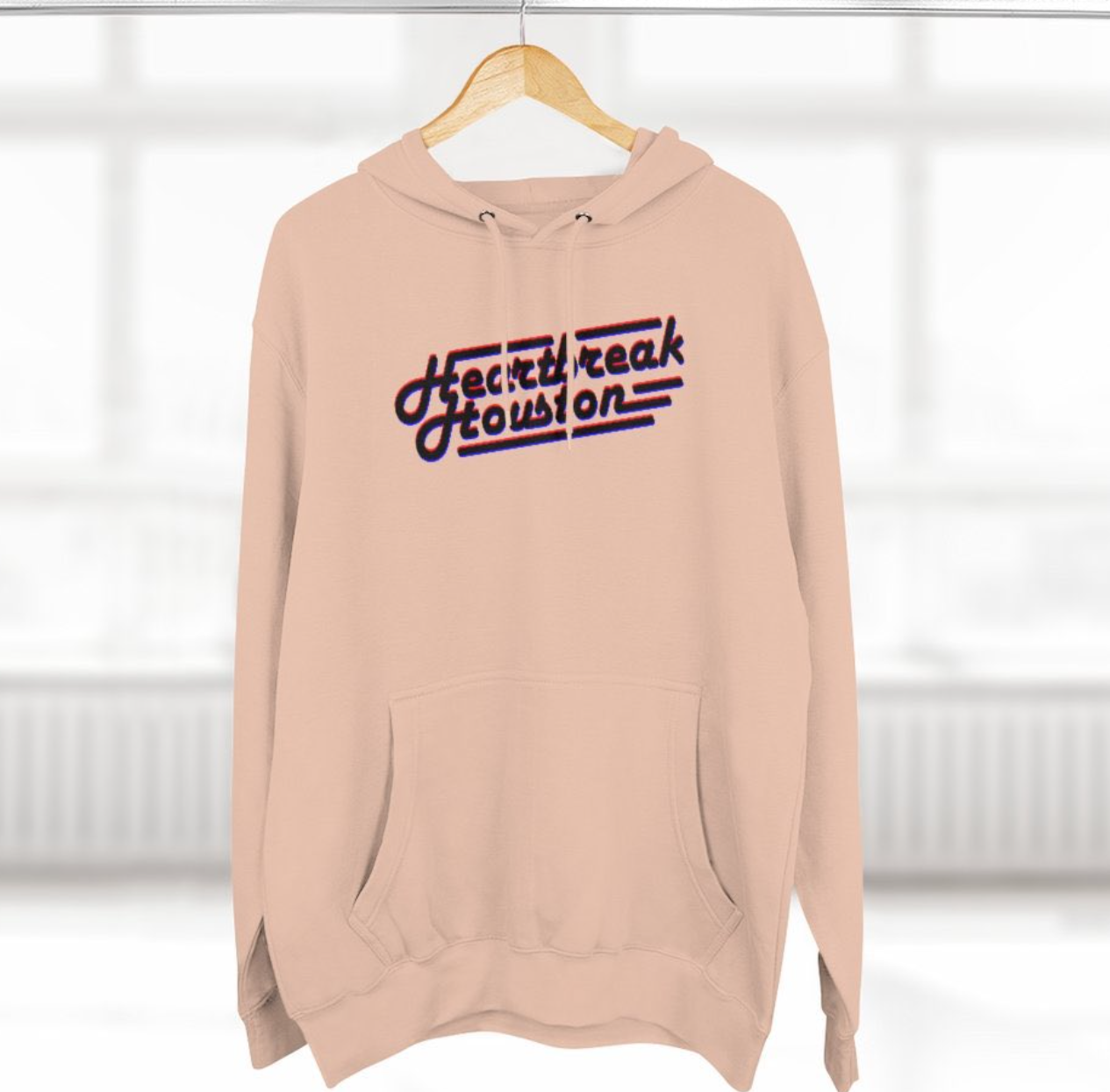 Many of us here in the Bayou City are still recovering from our newest case of Houston heartbreak < https://apollohou.com/products/heartbreak-houston-tri-blend-shirt?_pos=1&_sid=319dbc78b&_ss=r > – losing game 7s in back-to-back years is no easy pill to swallow. So, being the martyr that I am, I’d like to help try to ease some of y’alls pain by looking back and laughing at some of mine; these are Taylor’s top 10 sports heartbreaks. To preface, I should describe my fandom; I grew up in Oak Ridge (just north of Houston) but frequented back-and-forth between Texas & Louisiana, hence why I adopted the New Orleans Saints as a young kid (the only team I picked up from our neighbor in the gulf). I was throwing up the Hook Em’ sign as soon as I was old enough to understand what an Aggie was, and realized that I wanted to be whatever the opposite of that was. Besides that, I’m Houston through & through: Astros, Rockets, UofH, and yes *eyerolls* even the Texans. Everyone who knows me gets this fucked up excitement from watching me take my teams’ hopes to the highest peaks because they know that it’ll most likely end in me falling straight on my face. Not sure why people get a kick outta watching me shatter my own heart every year, but they do, and maybe you will too. Roll the clip.

I had never followed NCAABB all that closely (mainly because UT is always ass) but I wanted to change that in 2018. It was my first year living in Downtown Houston and I could feel the aura of hype that the city had placed around this Cougers team. They were on every TV at the bars, the talk of the town on the radio, so I said “Fuck it, I’m in”. To put it into perspective, I became committed enough to where I was watching full-length REGULAR SEASON college basketball games. I was invested, and by the time UofH was going into the tourny as a 6 seed, I was all the way the fuck in. Round of 32, Cougs are up 2 on Michigan with seemingly no time left; the over I bet didn’t look like it was gonna hit, but at least I was gonna get to root for a team in the sweet-sixteen for once. Right? LOL, wrong. Like some scene straight outta Hoosiers, some freshman (who was guarded tighter than the DMZ) put up an ugly ass jump-n-jack looking shot that was somehow couldn’t have been wetter if it was shot by Aquaman himself. Back to just filling out brackets for me thank you very much.

I, like I’m sure everyone else in Houston, could not believe my fucking eyes. The Houston Texans had jumped out to an early lead against Kansas City, then they widened that lead, then they made it even bigger! The Texans looked like they were rolling on all cylinders, establishing a should-be-commanding 24 point lead over the heavily favored Chiefs. Alas, in a blink of an eye Patrick Mahomes had snatched that lead away just as fast as we had got it in the first place, and he never even considered giving it back. This one would probably fall higher on the list if there was a single individual in Harris County who didn’t know in their heart-of-hearts that Houston was gonna blow that lead. Nearly 2 decades in existence & Houston has yet to see an AFC title game; same ole Texans lmao.

I was only 7 years-old here, so this one hit a lil harder. It was such an amazing run too, one of those teams that made me fall in love with the game of baseball. Young Carlos Beltran was on a postseason warpath, putting together one of the most incredible playoff performances that the sport had ever seen, and it was looking like he may just lead us all the way to the promise land… Going up 3-2 in the NLCS against your biggest rival, losing game 6 in extra innings, and not being able to win game 7 with Roger freaking Clemmons on the mound? THIS was my introduction to Heartbreak Houston.

I could probably make an entire list just consisting of times that the Saints have made me wonder why I even give a shit about sports, but this one smacked a little different. We were the defending Super Bowl champs and this was the first real leg of our comeback tour. The Saints defense had looked sloppy all day, but everyone knew that Brees could win the game for them if they could just get one stop here late in the 4th. They give the ball to Marshawn up the middle and he breaks through two tacklers, then a third, then a fourth.. “GET HIM” I screamed at my 32″ box television. He breaks two more, then stiff-arms Tracy Porter straight out of the league… “WHAT THE HELL IS GOING ON?!” Two more “get the fuck off me”s up the sideline followed for a total of 68 yards to the house. Seeing that my team’s season was over wasn’t even the worst realization, the worst was that I had just witnessed the most disrespectful play ever performed on a football field, and that I was gonna have to watch the replay of my team getting absolutely BODDIED for the rest of time.

The Crabtree Catch, you know your heartbreaks are bad when they have their own patented names. I can at least blame the 2009 BCS National Championship on the Colt McCoy injury, but these are the ones that you look back on and really hurt. That one play that kept your team out of the championship. Texas finished that year ranked #4 with a 12-1 (7-1) record. I swear I’ve disproportionally hated this man ever since this play, the moment that the Longhorn’s championship hopes literally slipped through our fingertips.. up the sideline… for a soul crushing TD…. Fuck Micheal Crabtree.

I was 8 for this fun one! This team tore me down the year before, built me right back up then kicked me in the dirt again like some sick joke – nothing like extinguishing the light of hope in a child’s eye I guess. It’s not that we lost, it’s not even that we got swept (it’s kinda that we got swept), it’s the WAY we lost those games. Every single one of those coulda been won, I mean we were in spittin’ distance for all 4 games; [GI: 5-3], [GII: 6-7], [GIII: 7-5], [GIV: 1-0]. Right fucking there, but juuuust outta reach. Devastating. Even more devastating that it marked the end of an era, and we’d have to wait another decade before getting to watch another respectable baseball team.

I mean, what the hell can I say? We got fucked. Have you ever seen a more blatant Pass Interference? And the ref was standing RIGHT THERE, if he was any closer to the play he coulda licked the ball. Game goes to OT, Saints get the ball first, turn it over (of course), & the Rams score to win the game. All of that could’ve been avoided, however, if the referee would’ve just opeNED HIS FUCKING EYEBALLS. We were petty about this one though, which made me feel a tad bit better. I mean we got fucked over so hard that the NFL had to make a whole new rule to shut us up, a Louisiana senator even tried taking this shit to the supreme court. The world missed out on a Drew Brees vs Tom Brady Super Bowl…

We had it. We fucking had it. The Houston Rockets were up 3-2 in a series against (arguably) the best team of all time. The Rockets were gonna finally slay the monster in the West, roll over that weak ass Cavs team in the finals, and bring that trophy back to Houston. James Harden was going to be nationally respected, MDA & Chris Paul’s careers were going to be solidified, and Daryl Morey’s analytical style was going to be validated. One Chris Paul hamstring & 27 missed threes later, the Rockets found themselves in the same place as they did the previous year – at home, watching the Warriors pop champagne on yet another championship float.

The Minneapolis Miracle; this one made me fucking sick. We did everything right. We scored at the right time, late, giving them next-to-no time. They quickly drove to about midfield, but they were out of timeouts. Diggs catches a ball on the right side amongst two Saints defenders with 4 seconds left on the clock. They’d made it into field goal range, but Diggs was too far from the sideline to get out of bounds and stop the clock before time would’ve ran out, so all we’d have to do is wrap him up to win the game & advance to the NFC Championship, then WHOOP! Marcus Williams goes for the no-arm table top attack, a move that I’m sure is now being taught by every DB coach in the nation. Fucking pathetic. Whenever we go yellin’ “WHO DAT SAY THEY GONNA BEAT THEM SAINTS”, we can find the answer by just looking in the mirror.

I’m sure that all’ve y’all got to go on this ride with me! We’re still seeing repercussions from the fallout of game 7. I wonder about how differently the whole Astros shame tour woulda gone down if we were coming off of a fresh, undisputedly legitimate title. Think about how that could’ve impacted free-agents or re-signings. All of that aside, the 2019 Astros were hands-down the best baseball team that I’ve ever seen step onto a diamond, and we lost to a fucking wildcard team. We’ll always wonder what could’ve been had Hinch not been so trigger happy and left Greinke in the game, but what none of us will ever forget is the sound of Howie Kendrick’s home run bouncing off of the right field foul pole. That deafening bang will echo in the minds of Stros fans for all of eternity… PLUS, I lost a SHITLOAD of money so I got to be sad on all levels! Proud heartbroken Houstonian right here ladies & gents.