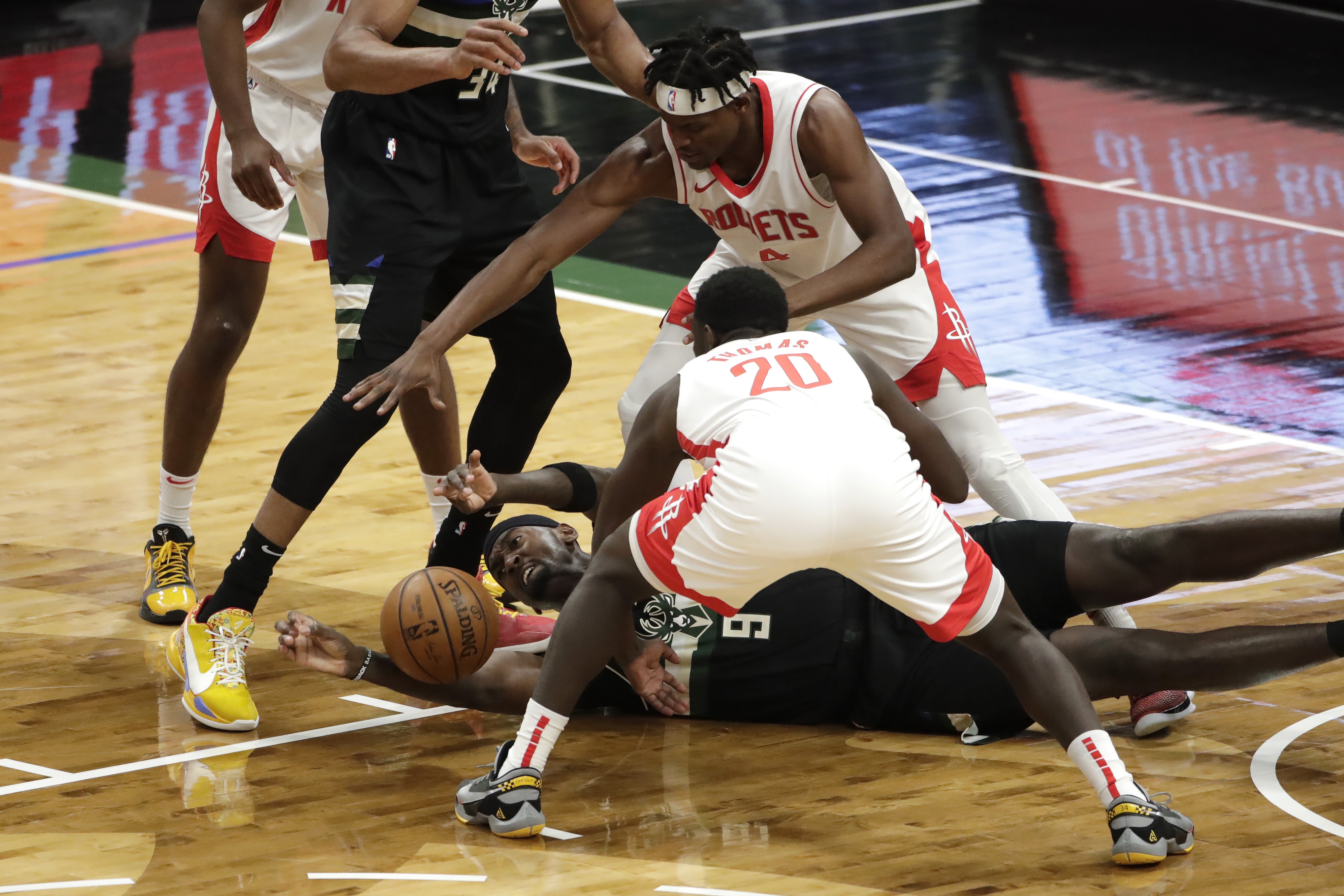 Milwaukee Bucks' Bobby Portis (9) loses control of the ball between Houston Rockets’ Khyri Thomas (20) and Danuel House Jr. (4) during the first half of an NBA basketball game Friday, May 7, 2021, in Milwaukee. (AP Photo/Aaron Gash)

In the very short amount of time that the Houston Rockets have employed Khyri Thomas, he has performed like a seasoned veteran. Within 48 hours of his signing he played a back-to-back and put up the two highest scoring performances of his career. After a 3rd spectacular game, he is averaging a cool 20/4/3 on 51/36/100 splits. Thomas has been in the league for three years and spent his first two with the Pistons, although he didn’t see the floor all that often, nor was he given many opportunities with the ball in his hands. In just his first three games with the Rockets he has made the same number of shots (22) that he made in his entire first season with the Pistons (26 games). This begs the question: has he simply improved, or has the coaching of Stephen Silas and the Rockets offensive system unlocked his true potential?

Since he has joined Houston, it’s clear that his intangibles on both ends are why he projects to not only being a plus-level defender, but also a plus-level rebounder. In his career high 27 point game against the Utah Jazz, Thomas showed off his ability to see the floor and disrupt passing lanes as he racked up five steals and multiple deflections. Thomas also picked up three steals in a loss to the Milwaukee Bucks in his Houston debut. Although he is only 6’3” Thomas owns a 6’10” wingspan that provides serious defensive versatility and makes his own shot much tougher to block. He has shown high IQ on fast breaks with a willingness to take it to the rack and scores well when moving downhill.

Thomas has also shown off solid passing chops with an ability to limit turnovers that most unproven players do not show. The explosive duo of Jae’Sean Tate and KJ Martin have provided him with trustworthy targets for his passes and he has dimed up Armoni Brooks for a pair of threes as well. He has thrown one lob so far and it wasn’t the prettiest as it clanged off the rim before Cameron Oliver could get a hold of it. He has shown a great willingness to pass in the half court offense as well as in the fastbreak. Thomas has all of the makings of a high quality NBA player and provided opportunities, will likely grow into a strong role player or eventual starter.

As with most young players who have received limited opportunity, there are still things to improve. Despite having the makings of a plus defender and showing prowess on the defensive end, there were some possessions where Thomas was seen taking a break off ball which allowed his man to score. This was in no way a frequent occurrence but something that can be polished up with a bit of coaching.

Another area that Thomas can polish up is his shot selection. In his first game he went 6/7 from the field on a very efficient night, but in the following two showings, his efficiency was not nearly as high. He scored very well inside in the game against the Utah Jazz, but he launched 12 three pointers, only four of which fell. Thomas would be better served driving to the rim where he has the most success rather than take a contested three. Of his nine shots taken within three feet of the rim, he has converted on all nine.

“It sounds good to get a contract, but I gotta earn it”

Rockets fan should be excited to see how Thomas continues to grow. As he said, he needs to earn his current and prospective future contracts. This should be no problem at all if he continues to provide this level of intensity and production on the court.