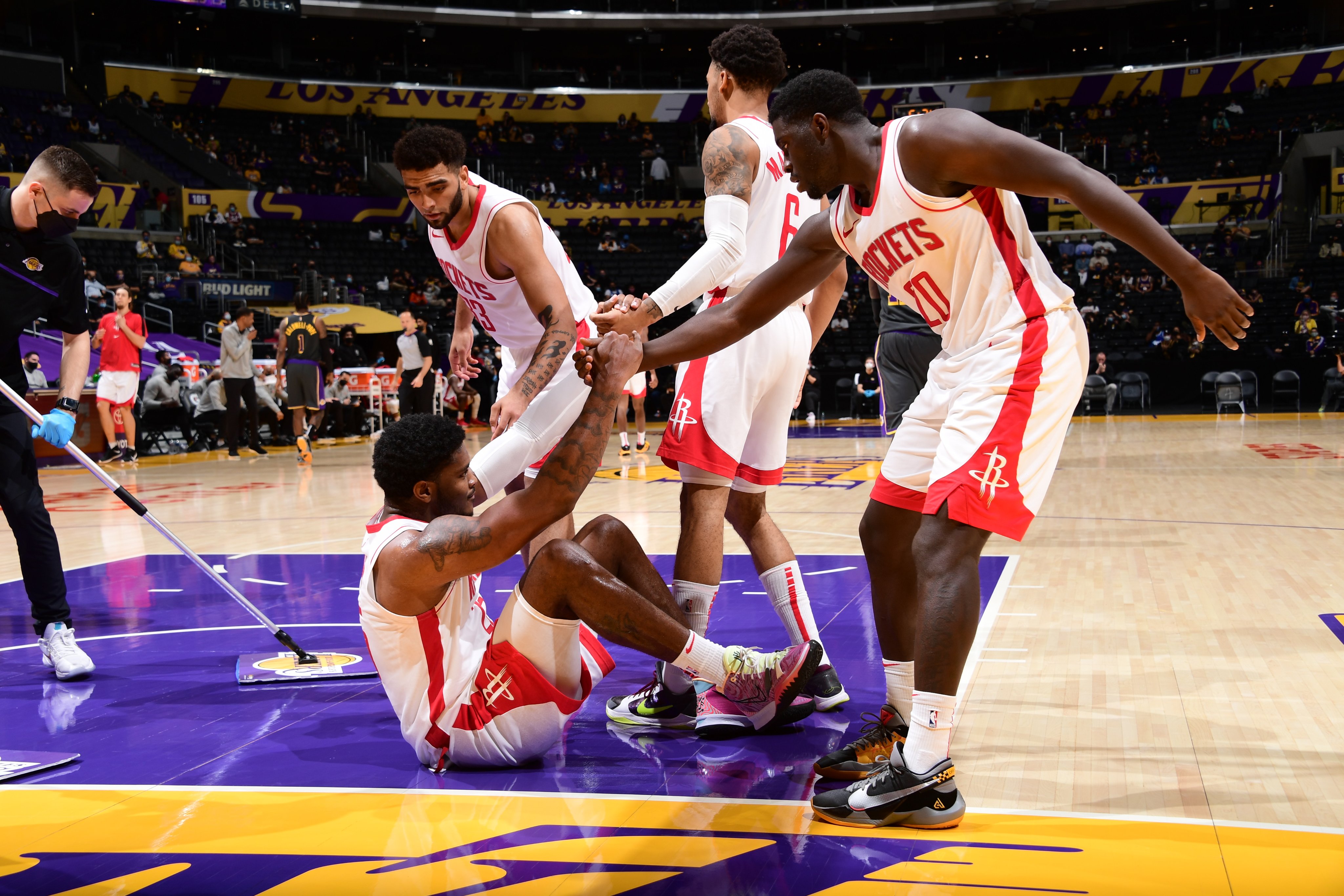 The Houston Rockets have officially secured the worst record in the NBA, and as a result, now possess the best percentages to secure a top-four pick for this year’s draft. It has been a polarizing year for the organization, going from title hopefuls to the worst team in the league in under nine months. Now, the Rockets stare down an inevitable road filled with tanking and rebuilding. There isn’t a way to sugarcoat this: tanking is never fun nor enjoyable; with that being said, there are a couple of ways that the process of rebuilding can be sped up. Luckily for Houston, I just so happen to be an excellent GM on NBA2K, so let’s take a look at the pivotal areas the Rockets’ front office needs to succeed in.

For a rebuilding organization, or any for that matter, scouting is critical to respective success. General manager Rafael Stone has already shown the ability to find diamond-in-the-rough type talents and bring them in on team-friendly deals. A good amount of this season has been throwing stuff at a wall and seeing what sticks, and in return, a solid young nucleus has formed for the organization to build around.

One of the main examples of that ideology is Jae-Sean Tate. The 25-year-old was signed to a two-year/$3 million deal before the season after spending some time playing overseas; since then, he has proven to be a defender with lockdown potential and is a candidate for Rookie of the Year. The scouting department also excelled with their late second-round pick in 2020. Kenyon Martin Jr has turned some heads with his elite athleticism and budding offensive game after being selected with the 52nd-overall pick by Sacramento and traded to Houston.

Outside of Tate and Martin Jr, the Rockets have taken fliers of players like Armoni Brooks, Cam Oliver, Khyri Thomas, Anthony Lamb, Mason Jones, and others. While none have made the impact that the other two have made, there are avenues that rotational roles can be secured.

Houston has even taken advantage of scouting in the trade market, bringing in Kevin Porter Jr in exchange for a second-rounder that likely will not convey. Porter Jr was the third-best prospect on my 2019 NBA draft big board, and has shown why this season. The 6-foot-4 combo guard is averaging 16.6 PPG to go along with 6.3 APG and 3.8 RPG in 26 appearances.

In all honesty, this subsection is just a continuation of the scouting area. Stone made sure to replenish the draft cupboard before blowing up the Rockets roster early in the season. After not having made a first-round selection since 2015, Houston now possesses an abundance of picks from not only their own organization, but a handful of others as well. As cliche as this sounds, the front office needs to have a handful of successful drafts.

The 2021 draft will offer a unique opportunity to speed up the rebuilding process; Houston is set to have three first-rounders: their own, Portland’s, and Milwaukee’s. Here’s where things get tricky; I mentioned early that the Rockets have the best chances of getting a top-four pick. If the pick falls outside of the top-four, it gets sent to Oklahoma City as a result of the Chris Paul/Russell Westbrook trade in 2019. There is a roughly about a 48% chance that the Rockets keep their pick, which is the highest probability.

The 2021 draft class is one of the strongest in recent memory, and for good reason. All eyes are set on Oklahoma State point guard Cade Cunningham in terms of future stars, but any of the Cunningham/Evan Mobley/Jalen Green/Jonathan Kuminga/Jalen Suggs group projects to be an all-star caliber talent. Long story short: a top-four selection would land Houston a prospect with ‘franchise centerpiece’ potential.

The other two firsts will likely fall in the 20-26 range, which offers opportunity to grab young pieces with notable potential and/or solid rotational players. A couple names that sound be on the team’s nig board in that range (not all will be available):

The name of the game for Houston when it comes to free agency and the trade market is to stay as cap flexible as possible. The organization will shed approximately $31 million in the offseason, but still remains in a tough situation due to some bad contracts. Let’s take a look at who the Rockets should keep, re-sign, and trade.

There has been a growing opinion that the Rockets should trade Christian Wood to garner more assets; I agree with the notion in principle and suggest it, but not with Wood. Besides, he has expressed his desire to continue to grow with Porter Jr. Tate, Martin Jr, and KPJ are obviously no-brainers. Supplying veteran presence is also crucial for youth development, so keeping DJ Augustin would also be a positive move.

Considering Dante Exum never appeared in a Rockets’ uniform due to injury, it’s unlikely he gets brought back. Kelly Olynyk has been a bright spot in the darkness for Space City, and should be re-signed on a multi-year deal, as long as the annual average doesn’t exceed $13 million. The same strategy goes for free agents like DJ Wilson, Sterling Brown, and David Nwaba. The latter two will likely elect to go to title contenders, but there would certainly be a chance for Houston to bring Wilson back on a team-friendly deal due to his solid performance after being traded for.

This is where things get tricky, again. The respective markets for John Wall and Eric Gordon may be dried up due to injury concerns, age, and hefty contracts. You can convince me to move Gordon to the ‘Keep’ section due to his veteran leadership and two-way skillset. However, Wall needs to go. Not only is the contract a huge hindrance, but he is also taking away from the development of Porter Jr as a primary ball handler. I’m not saying that Stone should give him away for nothing, but getting out of one of the worst contracts in the league would be a success. On top of those two, trading Danuel House Jr would be a smart move as well; although the 27-year-old is an unrestricted free agent in 2022, his three-and-D potential along with his small contract would likely bring a draft asset back in return.

Obviously, there isn’t a clear-cut formula to rebuilding successfully; oftentimes, luck is involved. Taking calculated risks in the trade market, doubling-down on investing in scouting, and staying cap flexible will not only allow the Rockets to rebuild quickly, but correctly as well.