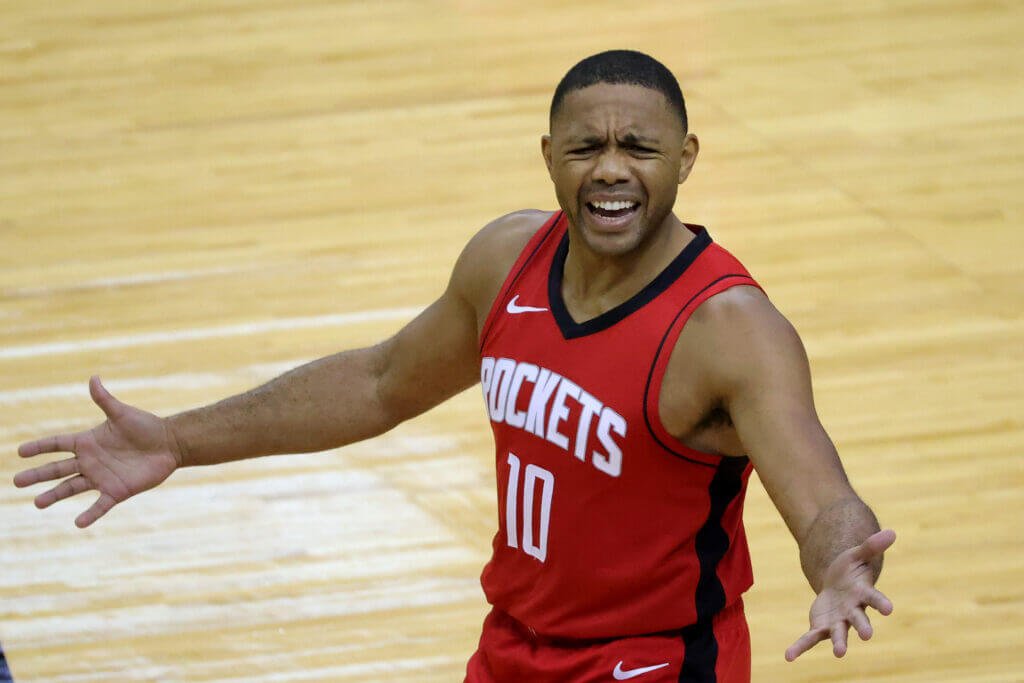 Let’s change lanes away from the conversation that has dominated (and unfortunately, divided, it seems) the Houston Rockets fanbase for a moment to focus on some non-draft related topics.

An interesting report out of Indiana, the future of one Johnathan Hildred Wall, front office hires of Matt Bullard (!) and Chris Wallace as well as who should replace Bullard in the broadcasting booth.

Our Apollo writers sat down to share their thoughts on each of the aforementioned topics.

Question 1: With the recent report from the IndyStar that the Indiana Pacers have had discussions with the Rockets about a player who “can contribute” and is “under contract for at least two more years” in exchange for the No. 13 overall pick, what is your realistic trade proposal?

I’m assuming that the Rockets go #MobleyMob and want to provide additional PG/SG support next to Kevin Porter Jr.. Also I love the defensive presence Brogdon has and he could be a good veteran presence in a locker room that may lose multiple of Olynyk, Augustin, and Gordon in free agency.

I’m very bad at trade proposals cause I don’t know how other teams value their players. But something like Eric Gordon + Danuel House + 23 for Jeremy Lamb + 13 feels fair I think.

There was an immediate reaction to this news where Rockets fans practically started packing Eric Gordon’s bags for him in order to ship him back to Indiana, but I think the Pacers probably had their eyes on guys like Christian Wood or Jae’Sean Tate.

That said, Eric Gordon is the only name that makes sense to move out for the Rockets, so possibly Gordon and pick No. 23 for Jermemy Lamb, salary filler and pick No. 13, although I think that’s pretty lopsided in favor of Houston.

Question 2: *If* the Rockets move John Wall this summer, which potential destination makes the most sense? What does the deal look like?

I could see Miami, New York, or Los Angeles (Clippers) making a run at Wall. However, the deal likely wouldn’t net much. In fact, the return problem looks like a decent asset plus 2-3 smaller, semi-bad contracts.

The New York Knicks have been on the radar as a destination that has both the cap space (which the Clippers do not have) and now the playoff aspirations that would be intriguing for someone like Wall. I continue to be skeptical that a trade could happen with Wall since there are so few teams that may be interested at his age and injury history. But the Knicks did a great job last season bringing in Derek Rose and continuing his 6th Man growth after his time in Detroit. A major concern for the Knicks is having a veteran PG to support their young inexperienced players, and John Wall may be a good fit for that.

I think the Clippers could use a player like (healthy) John Wall as an upgrade over Patrick Beverly for some of their point guard minutes. Especially if Reggie Jackson is looking to move to greener pastures in free agency. Beverly + Morris + Kennard makes the money work and the Rockets could easily move off those players again by the deadline if necessary.

I keep coming away thinking that the Miami Heat make almost too much sense for Wall.

The Heat could trade Goran Dragic and Andre Iguodala and receive an immediate boost to their backcourt and overall talent level with Wall. The Rockets would probably have to throw in a pick to say “thanks” for the expiring contracts, but it’s a deal where both sides come away happy.

How do you feel about the front office additions of Matt Bullard and Chris Wallace?

I was ecstatic to hear about Bull and Wallace being added to the front office; two solid basketball minds that know the organization and it’s players is a huge benefit moving forward.

Matt Bullard – great move. After his contract was not renewed with AT&T SportsNet I hoped he would get a role in Houston. I’m excited to see what he will do as a sort of liaison between the analytics department and the rest of basketball operations with his championship experience.

Chris Wallace – definitely a wait and see approach to him. Wallace’s previous GM experience with the Grizzlies was poor. However after he was “demoted” to the scouting department he was part of the front office that transitioned the franchise from an older Marc Gasol and Mike Conley to the next generation of Memphis players like Ja Morant and Jaren Jackson Jr.. Hopefully that experience transitions well in Houston.

I love Matt Bullard and I think his perspective is absolutely a good one to have in the front office. From what I hear he’ll be a bit of a liaison between the analytics people and the more traditional guys and that could be a great advantage throughout the draft process and free agency. I wouldn’t know who Chris Wallace was if he punched me in the face right now but apparently he did great things in Memphis so bring him on down.

Incredibly excited and happy for Matt Bullard to get this opportunity to continue his Rockets legacy — his experience as a former player and someone who has embraced analytics gives him a unique voice in that front office, an invaluable resource for Rafael Stone.

Chris Wallace’s track record with the Memphis Grizzlies was… less than ideal, but I trust in Stone’s judgement, and ultimately he’s the guy with the final say on decisions, not Wallace.

Assuming Craig Ackerman takes over full-time TV broadcast duties, who would you like to see fill Bullard’s shoes as the Rockets color analyst?

I wouldn’t mind seeing Clyde Drexler fill in the open role: great experience and is loved by the fanbase.

It would be great if Craig could call games with another former Rocket from the championship squad. I know Vernon Maxwell has really pushed that he’s interested, but him or another former player from those teams that hopefully have good chemistry with Craig would work for me.

Overall I just hope that Craig does get the opportunity to take over for Bill Worell if Craig wants that, and the announcement is made by the Rockets/AT&T SportsNet sometime in the near future.

No idea how interested he’d be in such a thing or if it’s feasible, but I love Jeff Van Gundy in the booth. He rants a lot but I find myself entertained by them basically all the time. And if Mike Breen can do local Knicks games why can’t JVG do Rockets games?

I think they ultimately tag Mario Elie for the role — assuming he wants it.