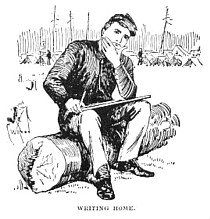 We sent the new guy on the road to travel with the team and document the journey of what it was like to be in front of opposing fans and the environment. What happened next we did not expect. Our new guy is a method actor apparently.

I write to you today as we begin our retreat by the cover of darkness. Our efforts and campaign on the southside of Chicago failed as the World Series cheating White Sox dug into their positions and flanked us from all sides. General McCullers took his regiment into the teeth of the Southside army and came up victorious. There were talks throughout camp, among us soldiers that you could see General La Russa and his staff riding away and we laughed and chuckled under the firelight. We were so wrong. The next two days were the bloodiest of the season as the opposing army attacked like a coward as we slept and divided our armies in two. The local citizens of the town yelled and booed us and threw tomatoes as we marched onto the battlefield. We quickly lost the ground that was taken by General McCullers, as Corporal Odorizzi was blasted by a cannon time and time again. I am afraid we are still looking for him as he hasn’t reported back to camp yet mother. The morale of the men had dropped when we realized that Captain Framber had forgotten his sticky bayonet and lead a desperate charge up the hill that only led to more death and despair. The mangled bodies and screams will echo for eternity in my ears Mother, it is early in the campaign and there is a rumor here in the camp that out West the A’s had lost a bloody battle. I write to you as we pack up and ride out back home to take on the team from Cleveland. We hope to regroup and lead an offensive charge that should get us on track. General Baker plays a ballad that has us confident that we will come out victorious.