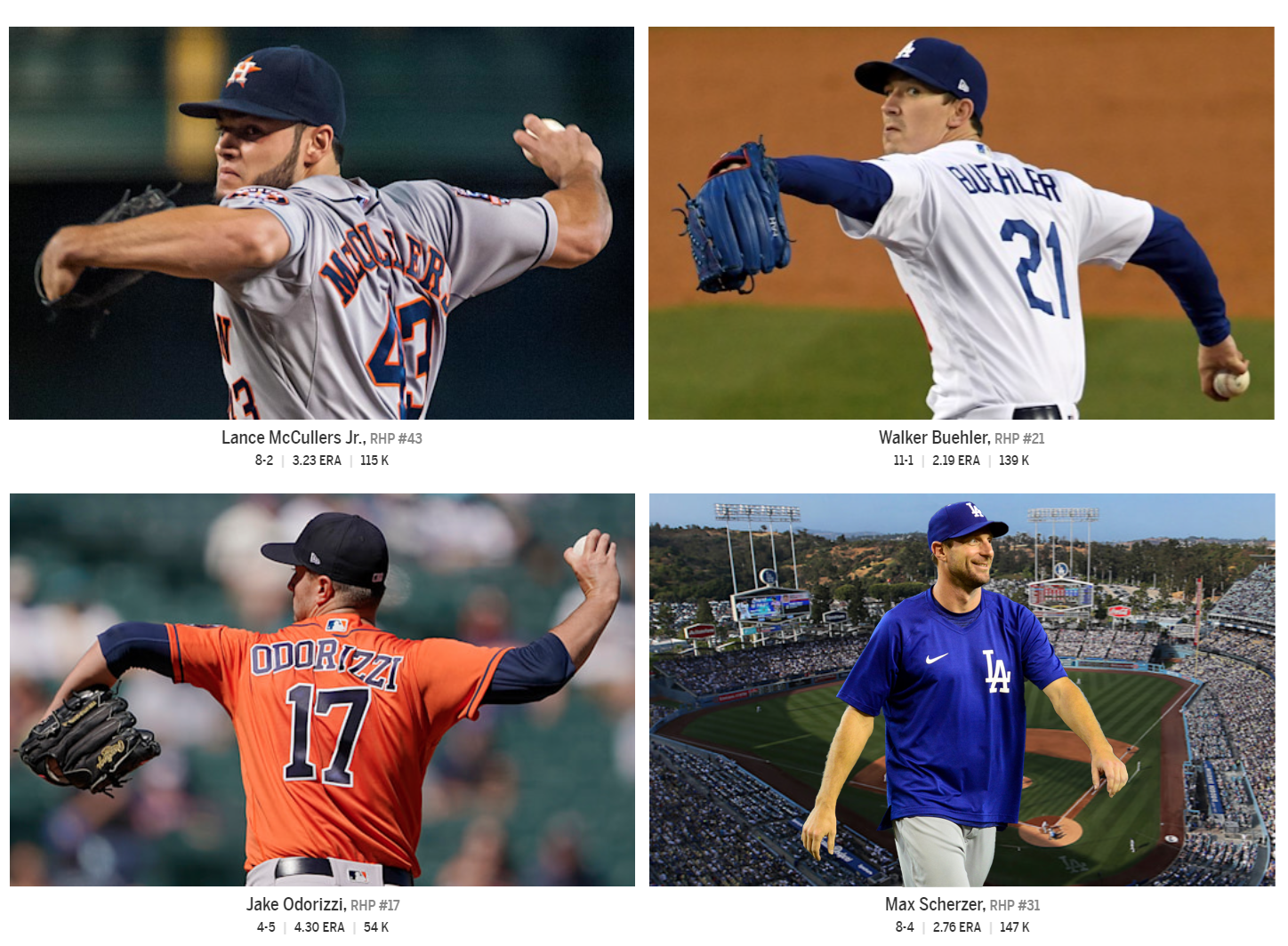 The stage is set for the Astros v Dodgers 2-game series on August 3-4 in Chavez Ravine. These games are always highly anticipated because of the heated history between the Stros and the Dodgers in the 2017 post-season, and the subsequent scandal the Astros were exposed of using (which provided a net-0 advantage to hitters).

This pair faced off at the end of May and split a 2-game series. The Dodgers first faced Zack Greinke who had a strong outing except for a 2-run shot allowed to Justin Turner in the 4th inning. The Astros bullpen allowed several runs and despite leaving 8 runners on base, the Dodgers managed to post a 9-2 victory. Kershaw went deep into the game and was removed after Alex Bregman hit a solo shot off of him in the 7th.

In the 2nd game Jose Altuve hit a lead-off home run against Trevor Bauer – who is no longer on the active roster due to ongoing investigations into his domestic-assault accusations – and in the 6th inning Carlos Correa went ahead and hit one out of the park as well. The Astros hammered the Dodgers’ bullpen for 3 more runs including a Diaz homer off of Nate Jones in the 7th.

When you have two teams with stellar starting rotations and lineups stacked with MVPs, silver sluggers and All-Stars, it generally comes down to pitchers making mistakes and hitters taking advantage of those mistakes. Coming into tomorrow’s series the Astros are leading the AL West with a 64-42 (.606 W-L%) and the Dodgers are 3 games behind the NL West leading San Francisco Giants with a 64-43 (.598 W-L%). There’s one HUGE glaring difference in these records – against teams that are .500 or better, the Stros are 42-25. The Dodgers are 21-24. The Astros have had 67 games against teams .500 or better compared to the Dodgers’ 45 games and have double the amount of wins. Does consistently beating better teams mean one team is better than the other? Short answer – you betcha.

I think what it will boil down to is the starting pitching matchups. As we are all aware, the Dodgers went out and got something they needed to fill holes in their rotation with the injury of Dustin May and the absence of Trevor Bauer during his administrative leave. Veteran starter Max Scherzer was traded to LA along with Trea Turner. The rotation isn’t as strong as it was at the beginning of the 2021 season, but it is formidable to say the least.

First up we have Astros RHP Lance McCullers Jr. facing RHP Walker Bueller. Both have a fantastic season up to this point. LMJ tends to throw better at MMP, but he also thrives under the bright lights and does his homework . Being that he has only faced the Dodgers in the 2018 post-season and briefly in 2018 before he left the field with his elbow injury, the Dodgers haven’t seen much of his stuff from the hitter’s perspective. Adding a new slider to his repertoire that already includes a strikeout inducing curve and fastballs that run harder than Usain Bolt, he’s sure to impress. During regular season matchups Mookie has seen him 5 times, Albert Pujols 15 times for a grand total of 0 hits, and Chris Taylor and Justin Turner have seen him 2 times apiece and got hits 50% of the time.

Walker Bueller is one of my favorite non-Astros pitchers to watch work. Simply put, the man throws gas and gets a shit-load of Ks. His W-L is an impressive 11-1 but that metric doesn’t come as much of a shock since the Dodgers lineup continues to rake, except for Cody Bellinger who is slashing an abysmal .163/.266/.285 with a .548 OPS. Stats that individually measure a pitcher are impressive to say the least – 2.19ERA, team-leading 135.2 innings pitched in 21 games, 139 strikeouts to only 31 walks all equals a 9.2K/9. With the workload he’s eating for the Dodgers he’s performing extremely well, all things considered. The Astros haven’t seen much of him either, and didn’t do particularly well when they did.

Jake Odorizzi is still under some scrutiny in Houston as the newest mainstay in the Astros rotation. He’s been pretty hot or cold in my eyes, but I still think he’s a serviceable pitcher for the backend of the rotation. I could totally see the Astros moving Javier back into the rotation and putting Odo in the bullpen if he continues to be inconsistent. He hasn’t seen much of the Dodgers lineup with the exception of Mookie Betts, who has hit well of him at .286 in 21ABs with 5RBIs. Again,

Max Scherzer is a 3 time Cy Young winning, 8x All Star, foaming at the mouth bulldog. Not much to be said other than he’s never faced a hitter that he was afraid of, and he has consistently been one of the best pitchers in the majors year after year for over a decade. The man is headed to Cooperstown and there’s no qualms about it from where I’m sitting. He’ll make his debut in front of the home crowd in LA and I’m sure he will be untouchable for most of his outing. But even Scherzer makes mistakes, and the MLB-best offense in Houston is sure to capitalize off of them. He hasn’t faced the Astros except for 10 innings in the 2019 WS. Here’s how he’s matched up with who he’s faced in the regular season.