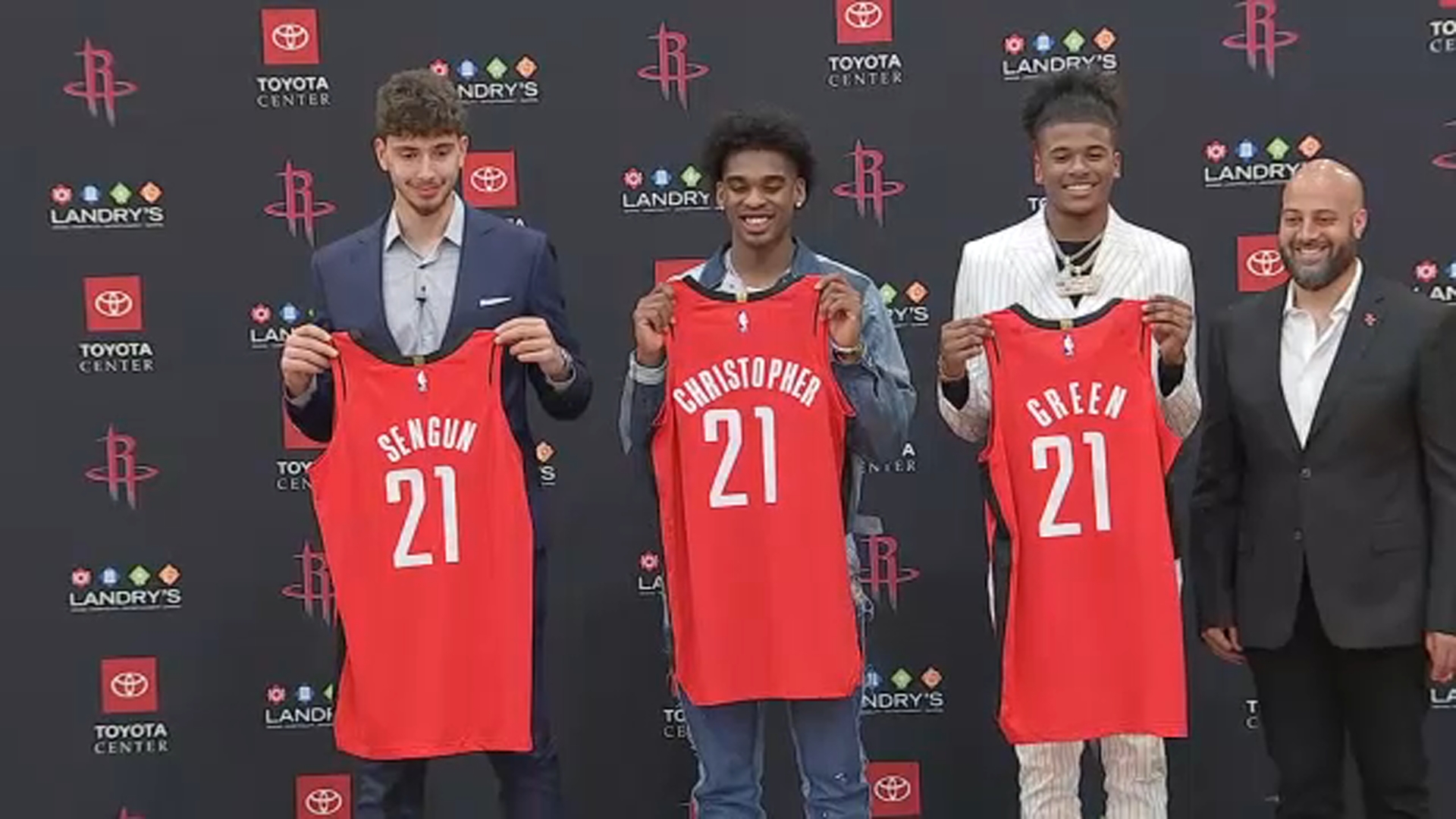 The NBA is heating up with the draft happening last Thursday and free agency beginning last night. The Rockets are filling small needs on their roster in free agency (David Nwaba, Daniel Theis) for now, but the main focus for the organization is still on the four first-rounders that the Rockets drafted.

Jalen Green, Alperen Sengun, Usman Garuba, and Josh Christopher comprise the draft class for Houston that will help lead them into the future. We gathered some contributors here at Apollo for our weekly roundtable to discuss them. Let’s get into it!

The Rockets set their sights on Jalen Green right after they were awarded the second pick. Green is the best scorer in years coming out of the draft. With his combination of athleticism and shooting, he could one day lead the league in scoring. Defense is the main area he will have to improve but Green in every interview since being drafted has pointed out that defense is a top priority for him.

Jalen Green had to be the pick here. Everybody was expecting it, you can debate all you want about who you thought was better between him and Mobley, and we did it to death, but ultimately you couldn’t go wrong with either one. Excellent that they didn’t reach for anyone in a draft where everybody lost their mind reaching. Jalen is a really exciting player with an elite attitude that everybody can’t wait to watch in the Summer League.

As one of the #GreenGang founding members, I was of course very pleased with this selection. I love Green’s functional athleticism and ability to create advantage situations with his first step and threat of finishing at the rim. He already shot well from the NBA 3 point line last season with the Ignite and I think he will be able to develop as a passer out of pick and roll. He already has shown he can throw the pocket pass to rolling bigs.

Everyone knew the Rockets were more than likely to get Jalen Green with pick No. 2, and I’m excited that it was able to happen come July 29th. I believe Green will be a sensational player for the Rockets going forward, and there’s no denying Jalen Green’s ability to put the ball in the basket would benefit a Rockets team that went on numerous scoring droughts after James Harden’s departure. Adding Green makes the Rockets must-see-TV again, and pairing this electrifying scorer alongside Kevin Porter Jr. gives the Rockets their backcourt of the future.

Alperen Sengun was a surprise pick for the Rockets. Considering going into the draft, he was projected right outside the lottery. However, Sengun has the best post-game out of any player in the draft. His game is a combination of Luis Scola and some parts of Nikola Jokic. He will have to improve from beyond the arc but is already an above-average free throw shooter.

Alperen Sengun is one of the guys in the draft with the highest ceilings. He has a lot more star potential than you should expect of someone picked at 16. It’s a guy that just knows basketball, the little things, has an incredibly developed post-game for his age, and, even though he is not too athletic, hustles a lot to make up for it. Turkish league MVP at 18. Working on expanding his range from 3. The only question is, will he be able to hang with NBA players on defense? Either way an incredible get at 16, most scouts had him in the top 10.

I was initially mixed about this pick with my preferred players, Jalen Johnson and Usman Garuba, still on the board, but I am coming around on it. Sengun has some interesting offensive tools and being paired with Garuba allows some of his defensive deficiencies to be covered up. I like having multiple playmakers on the court and Sengun’s post passing and handle allow for him to play that role.

I had Alperen Şengün at No. 10 on my NBA draft big board, so seeing the Rockets trade up to 16 to select him made my entire night. He was one of my favorite prospects coming into the draft due to his incredible season in Turkey, which resulted in him being the MVP at 18 years old. I also believe Şengün fits the Silas system extremely well, so Rafael Stone really knocked it out of the park with this draft pick.

The Rockets took Usman Garuba with the No. 23 overall pick. Garuba, as Rafael Stone put it, is one of the best defensive players in the draft. 6’8 with lateral quickness you usually see in guards Garuba can guard any position 1-5. In today’s NBA, which is about putting opposing bigs in pick and rolls, he perfectly fits the modern NBA. He Will have to improve his outside shooting, but the potential is there.

Usman Garuba is the best defender in the class. At 6’8 he can switch onto the perimeter and defend the post to great effect. Offensively he’s still very limited but his shooting form looks good. We turned KJ Martin, a total non-shooter, into a respectable shooter in 1 year, and I believe Garuba will be able to develop that. One underrated aspect of his game to watch out for? His passing ability.

I was extremely happy with the Garuba selection. I had a top-12 grade on him and thought he was a player we would have to trade up to get. He has already been heavily lauded for his defense, strength, and motor.  One thing I am high on Garuba is his short roll passing ability when operating as a screener.

When the Rockets selected Usman Garuba I couldn’t contain my excitement. Garuba is a prospect that I had at No. 15 on my big board: He’s about as active as they come, finding ways to put his fingerprints on basketball games any chance he gets. As Rafael Stone has said, Garuba is the best defensive player in the world that hasn’t seen the NBA yet, so I’m excited to see him showcase his defensive abilities for the Rockets this upcoming season.

A somewhat surprising pick at 24, Josh Christopher is one of the best players in the draft at getting to the basket. The guard out of Arizona State (who also wore 13) is close friends with Jalen Green and has already become a fan favorite. Christopher shot 30.5 percent from deep in his one year with the Sun Devils. He will have to improve that percentage in the future but will provide a spark off the bench.

I cannot tell you enough about how I LOVE Josh Christopher. The man could be the worst basketball player in the world that I’d take drafting him just based on his attitude. But the fact is that his basketball ability is really good too. Stuck in a bad situation in college he felt like he had to jack it up every time he had the ball because his point guard liked hogging it a lot. Christopher is a physical specimen who has the potential to be a high-energy scorer and defender off the bench on a team that already has Jalen Green. High ceiling, elite attitude, the most you can ask for on a pick as late as 24.

I liked Christopher’s creation potential, handle, ball pressure, and transition passing when watching his tape. He was graded as a top-10 player in this class as points but was thrown into strange on-court circumstances at ASU with a very unstructured offense and backcourt mate that took up a lot of shots. I think there is more potential here than many gave him credit for on draft night and getting some time in RGV to get more reps will help him early on.

Josh Christopher was a good upside pick at No. 24 for Houston. Christopher is a big guard, standing at 6’4 with a 6’9 wingspan. As Rafael Stone has mentioned, he sees Josh Christopher as an Eric Gordon type defender for the Rockets. He definitely has the capabilities to do that for Houston with his length and athleticism. Christopher was also a good scorer in college but wasn’t the best efficiency-wise (43.2 FG%/ 30.5 3PT%), so I think he’ll have a good amount of time in the G-league to work on his game. I will say, It’s a good sign that Christopher has already begun to work out with Rockets coach John Lucas because Lucas is great at developing young players, as Houston saw with Kevin Porter Jr. and KJ Martin last season. I’m ecstatic to see what he brings to the roster next season!

To me, ever since draft night, this has always been an ‘A+’ in my book to Rafael Stone. He chose upside over known quantities. Stone did not reach, took what fell on his lap, and was aggressive pursuing Sengun who was also falling. None of these picks seem out of place. As a matter of fact, I’m so impressed that this was the only thing we weren’t sure about Stone being good at and, right now, I’m completely fine with trusting his eye for talent.

Overall I would grade the class a solid ‘A’. If we had just selected Green and Garuba that would have been an excellent draft to me. To be able to get two additional players that have solid upside beyond that means you will not hear a negative word from me about how GM Stone did with these picks.

Thank you for joining us for this week’s Rockets Roundtable! Next time, we’ll be looking at free agency.