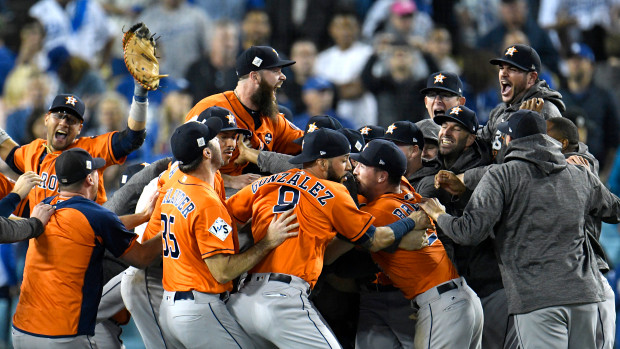 Everyone’s favorite villain is back at the scene of the crime. The Houston Astros, who singlehandedly ruined the game of baseball and stole the 2017 World Series from the Los Angeles Dodgers, are back in Chavez Ravine for two games this week, allowing blue clad fans the opportunity to voice their hatred for the biggest cheaters of all time.

Or so the narrative goes.

Reality is a little different than that, but don’t let that get in the way of a good story. Many fans across baseball, and many in the media as well, are all too happy to perpetuate the myth that the Astros were the first and only team to illegally steal signs and that they used it to take a championship away from the poor rule-abiding Dodgers. They cry about trash cans and about how the Astros supposedly knew what every single pitch was going to be.

Of course the truth is that while the Astros did operate an illegal sign stealing scheme in 2017, doing so in the postseason would have been nearly impossible thanks to the crowd noise with Minute Maid Park’s roof closed. They also got two of their most important World Series wins – Game 2 and Game 7 – on the road. And even when they did successfully steal signs, it wasn’t that helpful – even The LA Times admitted as much. Knowing all that, logic would dictate that the sign stealing wasn’t the reason the Astros won. Try telling that to Dodgers fans, though.

The Astros are simply the team everyone loves to hate, and no amount of fact or logic is going to make the haters change their minds. For Dodgers fans, it’s easier (and much more enjoyable) to sit there and scream at the Astros for cheating than it is to accept the fact that their team just plain lost. It also helps them ignore the other issues that plague the Dodgers.

What issues, you ask? Well, for one, the current Dodgers team boasts the likes of Mookie Betts, David Price, and Joe Kelly, who all won rings on the 2018 Red Sox, a team that also illegally stole signs and defeated the Dodgers in the World Series. Yet for some reason they’re all given a pass for it. Guess it helps to be able to pin it all on some lowly video room guy.

Kelly in particular is exalted in Los Angeles like some kind of demigod because he threw fastballs at Astros players, made stupid faces at Carlos Correa and scurried away from a potential fight. He doesn’t even seem to care about the sign stealing itself. On teammate Ross Stripling’s podcast, Kelly vented that Astros players snitched and threw others — particularly his “respectable” former manager Alex Cora — under the bus to take the fall. It wasn’t that they cheated – it’s that they talked.

But as ridiculous as Kelly is, nothing compares to the Trevor Bauer situation. The Dodgers were more than happy to welcome him and pay him a record salary despite the fact that everyone knew he was a complete jerk. Who cares, as long as he can throw a baseball well, right? Now that he’s apparently moved up to full blown assault, though, let’s just pretend he doesn’t exist.

Even aside from the personal baggage, Bauer was also obviously cheating with the use of sticky substances. He wasn’t alone, of course, but it’s telling that the Dodgers were named in SI’s report as the most egregious violator of the ban on pitchers using foreign substances. Funnily enough, Dodgers fans resorted to many of the same arguments Astros fans have been using – it wasn’t just their team, it was happening all around the league.

Apparently that defense works on sticky stuff, but not on sign stealing. Just wait until we get proof the Dodgers were stealing signs too — there have already been accusations and rumblings. It’s also curious that since MLB finally cracked down on illegal sign stealing, Cody Bellinger has suddenly forgotten how to hit. He batted just .239 in 2020, and his numbers this year are far worse. Even Martin Maldonado has a higher OPS than Bellinger this season.

But to Dodgers fans, none of that matters. The fact that they won the World Series last year doesn’t change anything either. They will continue to believe their team was destined to win and the cheating Astros stole a title from them. Maybe they can get together with Yankee fans and bond over how unfair life is.

Meanwhile, the Astros continue to absorb the hate and seemingly feed off it. It warms my heart every time Jose Altuve shuts up opposing fans with a home run, as he did most recently in San Francisco. This team is once again in a position to win a championship, and with any luck, they’ll get to do it against the Dodgers.