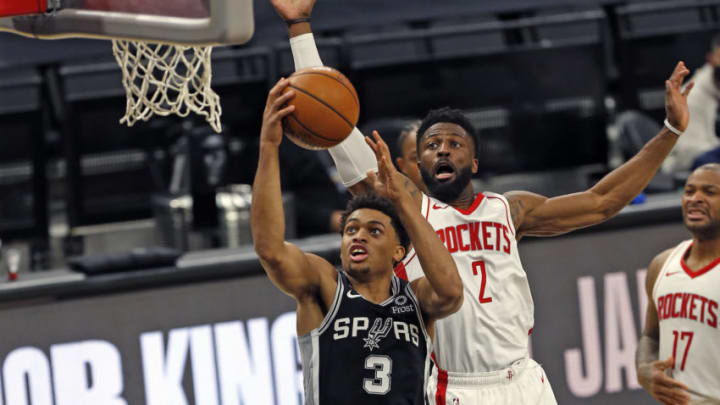 To me, while bringing back David Nwaba wasn’t a necessity, it certainly isn’t a bad move, especially due to the format of the contract in question. When we look at the Rockets timeline from a cap space perspective, we can see that while Eric Gordon and John Wall are here, the Rockets won’t be major players in free agency. As such, any contracts that encompass this year and the next one don’t really damage the Rockets’ ability to generate cap space, since they wouldn’t have it anyway. Having the option to get off Nwaba’s salary when it truly matters, in the 2023 off-season, when Wall and Gordon are off the books and the Rockets aim to get back to playoff contention, is the key in this deal. The space likely couldn’t be used for anything better anyway.

Now that contracts are out of the way, what does Nwaba bring to an inexperienced rebuilding team who’s looking to get minutes to their young core? – Nwaba brings the intensity defensively, something that usually young teams lack. As an incredibly athletic 6ft5 Shooting Guard, Nwaba fits the archetype Jalen Green and Josh Christopher should aim to become on the defensive end and I believe Nwaba can mentor them into becoming their best selves there. Nwaba, known as someone who takes pride in sacrificing for his teammates, I would guess won’t demand too much playing time. At the same time, he is able to play the 3, the position the Rockets are the least deep at, especially if Danuel House is eventually moved as has been speculated all over Rockets circles.

This leaves us with KJ Martin/Tate to play SF/PF, Nwaba and Gordon to play SF/SG, Christopher likely headed to the G-League, Jalen Green as a SG that might have to play SF due to inability to get rid of Wall, and Wall/KPJ/Augustin as true point guards.

From a financial standpoint, Theis is a bit more of a head-scratcher. While $9M AAV for a player of Theis’ caliber doesn’t sound too bad now, I would even call it an asset, I’m not sure he will be all the way until he is 33. Either way, that might not matter. Theis signed a 3+1 deal, meaning that the last year of the deal is a Team Option. That’s the kind of flexibility contenders love on their role players. I expect Theis to be shopped every trade deadline.

In the end, I expect this signing was capitalizing on the Victor Oladipo TPE that was bound to expire soon, turning it into an asset they can later sell for some palpable assets, maybe a late first-round pick from a contender. While this might seem farfetched right now, think, wouldn’t you have given up a late FRP during the Harden days for a Center who is a dog on defense, is switchable enough, and can shoot the 3 to some extent? I definitely would have if he only cost $9M a year.

From an on-court production standpoint, Theis, much like Nwaba, is a high motor guy on the defensive end, which in my opinion hints back at the fact that Rafael Stone continuously talks about a culture reset. Theis and Nwaba match in that sense, bringing the defensive intensity, and, hopefully, he can rub off on Alperen Sengun and show him the ropes on the defensive end where Sengun lacks. Theis isn’t a very athletic guy, the same applies to Sengun, so maybe there are some tricks to be taught there. When it comes to the rotation, the Rockets’ frontcourt is now somewhat crowded, so let’s analyze it:

So Theis does somewhat complement the Rockets’ frontcourt that was looking pretty thin thus far. I believe guys like House or KJ Martin or even Tate will be able to slot at the 4 in certain lineups but nothing significant enough to include them in this analysis. Unless, of course, Garuba is indeed sent to the G-League, opening up minutes for those guys.

What to look forward to in Summer League:

All in all, I expect a pretty exciting week for the Rockets fandom. We finally get to watch these guys we’ve been drooling about for months take the court in Rockets gear and it will definitely bring some much-needed positivity after a year as tough as the Rockets have had. Be sure to just enjoy it and not panic at mistakes, because they will happen. None of these guys are NBA level yet. Also be sure to join me and Don Knock every gameday on our Watch Party via Twitter Spaces, follow @ProdiGOnTwitt3r and @DonKnock for future updates!