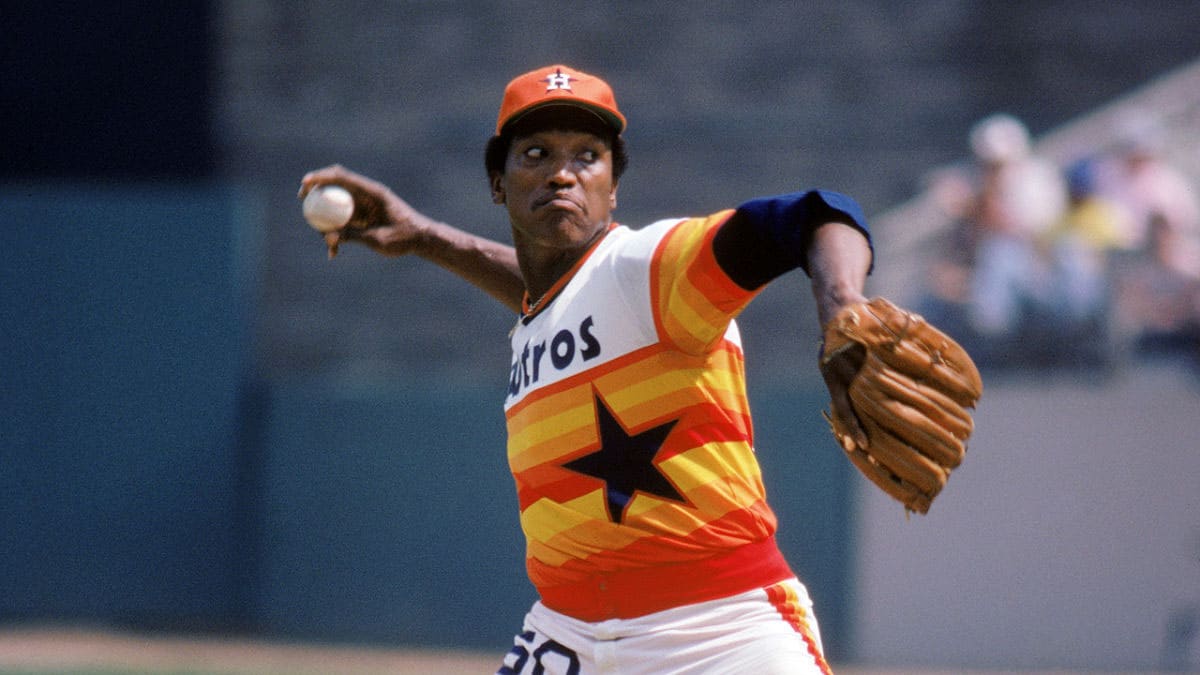 There’s no shortage of “what if” stories throughout Houston Astros history. Players like Dickie Thon and Don Wilson had promising careers that were impacted by injury or untimely death. But as good as those guys could have been, neither of them could hold a candle to the great James Rodney Richard.

The news of J.R. Richard’s death last week was like a gut punch to the entire Astros organization and fan base. Arguably the greatest pitcher to ever wear a Houston uniform, Richard was on his way to the Hall of Fame before a stroke cut him down in his prime during the 1980 season. It will forever remain the subject of speculation just how his career – and baseball history for that matter – would’ve turned out if his stroke never happened.

There’s no doubt that based on sheer talent, Richard stood alone. His fastball regularly reached triple digits, even reaching as high as 103 mph, with his slider once clocked at 98. Joe Morgan said it was the best stuff he’d ever seen. Dale Murphy and Dusty Baker both said Richard was the toughest pitcher they ever faced. He notched 15 strikeouts in his major league debut, three of which came against Willie Mays.

Even though his peak lasted only four and a half seasons, he’s still third in club history in strikeouts. His .212 opponents’ batting average is the best in Astros history among pitchers to throw at least 600 innings. He’s the only Houston pitcher to strike out 300 batters in two different seasons, and he did it in an era when hitters didn’t strike out nearly as much as they do today.

There are plenty of “what ifs” here, starting with what if the Astros had taken him seriously when he complained of pain, stiffness, and blurred vision in the months and weeks leading up to the stroke. What if it had never happened and he’d been able to continue his career? It would’ve not only changed Richard’s standing among the game’s greatest hurlers, but it would’ve changed the franchise’s fortunes too.

In looking at what Richard’s career might have been, a decent comparison is that of another great Astros pitcher – Randy Johnson. Both featured a power fastball-slider combination, and both took a little time to morph into their most dominant selves after dealing with control issues early in their careers. Both led their league in walks in three different seasons in their mid-to-late 20s.

Johnson’s age-29 season was when he finally got the walks in check, and he finished second in the Cy Young Award voting. Richard also saw a sharp decline in walk rate in his age-29 season, when he led the majors in both ERA and strikeouts, finishing third in the Cy Young voting. Johnson, of course, went on to become arguably the most dominant pitcher of his era, finishing second all-time in strikeouts.

He struck out north of 300 batters in each of his last two full seasons, so we’ll say 300 strikeouts for each of his additional prime seasons. Then we’ll say 200 strikeouts for each of the next three years, and 150 in each of the last two. That’s 2,400 strikeouts; if you add on the additional starts he would’ve made in 1980, he would’ve had around 4,000 career strikeouts. Even allowing for injuries or a quicker decline, he still had plenty of wiggle room to get to that all-important 3,000 strikeout plateau. Unless you’re Curt Schilling, it’s almost an automatic entry into the Hall of Fame.

Richard was sitting on a 10-4 record after 17 starts in 1980; let’s say he finished the year with 16 wins. Then let’s say he averaged 18 wins in each of his five remaining prime seasons (he’d averaged 18.5 from 1976-1979), averaged 14 wins in the next three years, and then 10 wins in his last two. That comes out to 265 wins, which isn’t automatic Hall of Fame territory, but is still more than respectable. He might have ended up with more, but then again, the Astros weren’t always good in the 1980s.

Let’s start with 1980, since that’s the one that may hurt the most. Even without Richard, the Astros won the NL West and took the Phillies to the end of a best-of-five NLCS. Featuring four extra-inning games, it was about as close as a postseason series can be. Nolan Ryan started Games 2 and 5, so let’s assume Richard would’ve taken the ball in Games 1 and 4 – both of which the Astros lost.

In Game 1, the Astros scored only one run off the great Steve Carlton, so it would’ve been a tall order for Richard to outduel him. But with Richard at the height of his powers, it’s certainly possible. Game 4 saw the Astros blow a 2-0 lead as starter Vern Ruhle allowed the first three batters of the eighth inning to reach base, and the bullpen couldn’t keep them from scoring. Would that have gone differently with Richard on the mound? Quite possibly.

I keep thinking of Mike Scott’s ridiculous run in 1986 and how he was simply unbeatable in that NLCS. Would Richard have put up that kind of a performance? Would he have been the unstoppable force the Astros needed? We’ll never know, of course, but I think I speak for all non-Philly fans when I say I would’ve loved to see how that would’ve gone. As it was, the Phillies would go on to defeat the Royals in the World Series.

Speaking of 1986, Richard would’ve been 36, so in all likelihood Scott would’ve been the ace. As it turned out, Scott’s starts in Games 1 and 4 were the team’s only wins in that NLCS against the Mets. Where Richard might have made a difference would be in Game 3. Starter Bob Knepper pitched well aside from a four-run sixth inning that included an error. A Dave Smith blown save in the ninth turned out to be the difference, but maybe a still-effective Richard would have allowed Smith more breathing room.

Then you have the decisive Game 6, which was again started by Knepper with Scott lurking for a potential Game 7. The Mets were held scoreless through eight innings, but Knepper allowed two runs in the ninth before being replaced by Smith, who allowed his inherited runner to score to tie the game. The Astros would lose in 16 innings. It’s hard to say Richard would’ve done better than eight scoreless frames, but you never know. That’s the nature of the “what if.”

There’s also 1981, when the Astros reached the NLDS in a strike-altered season. They took a 2-0 lead in the best-of-five series against the Dodgers but then lost three in a row while scoring a total of two runs. Would peak Richard have outdueled Fernando Valenzuela in Game 4? Maybe. It sure would’ve been fun to watch. But regardless, 1981’s loss was on the offense. Richard may still have not been enough.

The remaining years in this span saw the Astros finish no closer than six games out of a playoff spot. Would Richard have helped the 1983 Astros overcome that deficit and pass up the Dodgers? Their starting pitching was decent, so it’s no certainty. The remaining teams were just beyond help. Not even Sandy Koufax could’ve propped them up enough.

Richard’s story is nothing short of amazing, the kind that could be made into a Hollywood film. After losing his fortune and ending up homeless for a time, he was able to get his life back together and do a countless amount of good work in the community. The Astros never seemed to fully embrace him the way they should have, but that doesn’t diminish his standing among the franchise’s all-time greats.

One thing we really missed out on was we never got to see Richard pitch in the postseason. We only had a few months of him and Ryan together in the rotation. That could’ve been the most dominant duo of its time, but sadly it wasn’t meant to be.

There are plenty of great pitchers who spent the bulk of their careers (or at least a significant portion) with the Astros – Ryan, Scott, Roy Oswalt, Larry Dierker. And there are others who’ve had shorter stints – Johnson, Justin Verlander, Roger Clemens, Gerrit Cole. But it’s hard to make an argument that any one of them was clearly better than Richard.