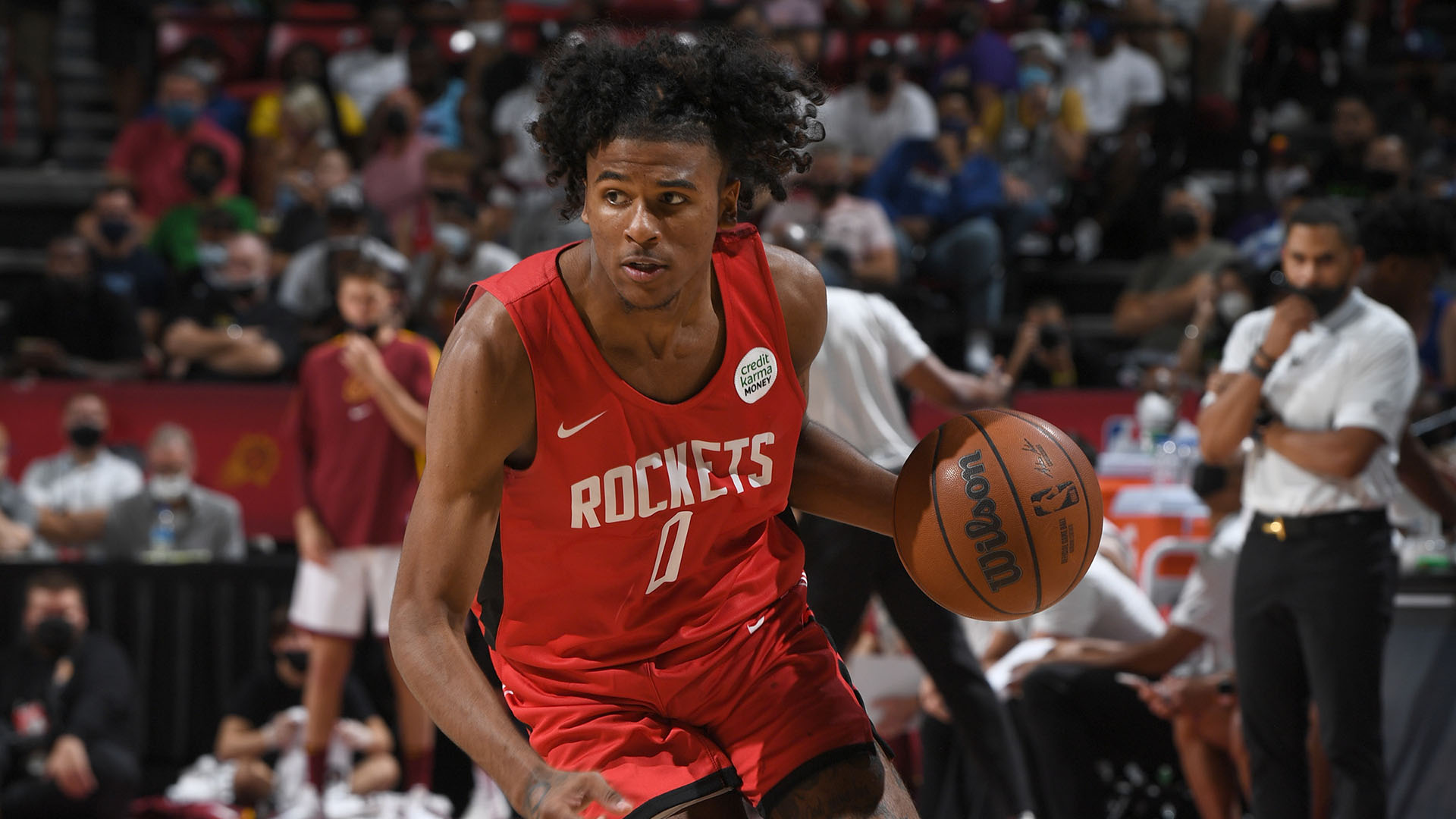 The Houston Rockets played their first Summer League game of the year last night, winning against the Cleveland Cavaliers 84-76. There were impressive performances all around. Jalen Green finished with 23 points on 9/18 shooting (4/9 from 3). Alperen Sengun put up 15 points and 15 rebounds with four blocks while also talking to the basketball before his free throws. KJ Martin and Josh Christopher also stood out with their play. Overall, it was a very encouraging first game from the young core as they begin to build chemistry together.

We asked some contributors here at Apollo to give their thoughts on the opening game for the weekly Rockets Roundtable. Let’s get into it!

Who is your Apollo Player of the Game and why?

My player of the game is actually Alperen Sengun. Don’t get me wrong, Jalen Green was dynamic, but Sengun filled the box sheet. 15 points, 15 rebounds, four blocks!

My Apollo Player of the Game is Alperen Sengun. We already knew that Jalen Green was that guy, but Al P came in and showed us massive effort and grit. He fought for every rebound and made heads-up passes all game. He effectively locked down the No. 3 pick, Evan Mobley, and was able to draw trip after trip to the line. We can only guess what he had to say to the basketball in those intimate 10 seconds, but whatever it was, it “translated” to success. I believe Sengun will be ready to come off the bench in the NBA right away.

I’d prefer to call Rafael Stone the Apollo Player of the Game because every draft pick played outstanding basketball tonight.

How’s that for a debut??

Jalen Green was good as advertised obviously, but Sengun was the most eye-opening. He is crafty in the post and can slip through the defender. I was very impressed with his ability to get to the line, and those 15 boards were huge, especially with some possessions against Evan Mobley. Also, his defense was a pleasant surprise with four blocks and some good contests on Mobley inside. Thanks, OKC!

My Apollo Player of the Game is absolutely Jalen Green. He had the full bag on display tonight and also displayed an incredible game feel and awareness of when he needed to put his stamp on the game at the beginning of the second half.

Who was your least impressive player?

Anthony Lamb finished last year strong but struggled in last night’s game. He was only 1-5 from the field. He had 6 rebounds but struggled to get his shot off.

The least impressive player was Marcus Foster, but I think the main reason he disappointed me so much was simply the fact that he was not Armoni Brooks, who was unavailable due to health and safety protocols. The Rockets relied on Foster to hit a multitude of 3-point shots and he just could not convert.

Marcus Foster was unimpressive. At Creighton University last year, he averaged 16.7 points and shot 41.3% from 3 on 7 attempts a game. He’s proven he can shoot, but if this summer league game was your first time watching him, you probably thought Foster was crazy for shooting the number of times that he did. Overall, Foster finished the game going 0/4 from 3 while being a team-worst -13 on the court.

Marcus Foster had many open looks from three and couldn’t knock them down. He needs to work on his jump shot.

My least impressive player would be Anthony Lamb. He had some good flashes in the G League bubble last season and I hoped he would return to that form in a summer league environment but he did not have a good showing tonight. Two points on 1/5 shooting, but he did have six rebounds.

What was your favorite play/moment?

My favorite play was the Jalen Green step back in the corner by the Rockets bench. It showed how great his balance and footwork will be going forward against good defense and he still made the shot.

My favorite play was absolutely seeing Kenyon Martin Jr. rise up and deny the alley-oop that was thrown to Evan Mobley in the first quarter. Not only did he invite another seven-footer to his infamous block party, but I also believe he put a solid dent in Evan Mobley’s confidence.

There were so many highlight plays, but I’ll go with the KJ Martin dunk from the 4th quarter. Evan Mobley learned pretty quickly that KJ Martin had insane bounce throughout the course of the game. When Mobley saw KJ Martin heading to the paint with a head of steam, Mobley made the right choice to get out of the way as Martin threw down an emphatic slam.

Hard to pick, but I’d go for a tie. Jalen Green’s step-back 3 on two defenders was *Chef’s kiss* and KJ Martin’s block on the Evan Mobley alley-oop attempt.

My favorite play of the game was the KJ Martin block on Evan Mobley. I said on the pregame portion of the Apollo watch party on Twitter Spaces that I needed that or a Jalen Green dunk on Mobley’s head and KJ granted my wish.

Overall takeaway from the game.

The Rockets rookies all showed why they were drafted in the first round at different points of the game. Green showed why he may end up being the best player in the draft and Sengun is the real deal.

My takeaway from this game is that the Rockets young core is going to be a force to be reckoned with and this team is going to win a lot more games than people are thinking they will this year. Josh Christopher, Alperen Sengun, and Jalen Green all showed huge effort on both ends of the floor and teams will not be able to keep up with the tenacity of these young players with chips on their shoulders. Jalen Green is going to win multiple scoring titles and once he has other offensive weapons around him, he will be extremely difficult to guard.

My overall takeaway from this game is how telling it is that the Rockets have an exciting young core for the future!
– Jalen Green can score at will, and anytime he wants.
– Alperen Şengün is an extremely smart player (offensively and defensively).
– Josh Christopher is CLAMPS and is elite at scoring off the dribble.
– KJ Martin is the definition of a human highlight reel, and is also a respectable 3PT shooter already at the age of 20!

There is a lot to look forward to with this young core for the next few years to come, a lot of heart and hustle from these guys, and outside of Jalen Green, the rookies Sengun and Christopher showcased what they can bring for the Rockets. Sengun’s ability offensively and on the boards and Christopher’s defense and attacking the basket was impressive. I was also happy to see KJ Martin knocked down some 3s.

The overall takeaway from this game for me is that our first two draft selections came out and had strong performances and gave Rockets fans a jolt of energy that we have been needing since the Harden trade request. We are going to see lots of Jalen Green and Sengun propaganda go out over the next few days and the fanbase deserves to have this moment of revelry.

What adjustments are you looking for next game?

The Rockets have to be stronger on the boards and play with more pace, as Coach Silas said. Overall, though, it was a great start.

The main adjustment I would like to see in the next game would be for JayGup to slow it down on offense and take his time rather than be in such a rush to get to the hoop. Some sloppy plays were made by the rookies but in reality, they just need time to settle in. I would also like to see some playing time for Jalen Tate instead of Marcus Foster or Anthony Lamb. Finally, when Sengun is not on the floor, the Rockets are going to need more players crashing the boards and fighting for rebounds.

Coach Will Weaver had the Rockets playing good basketball. The issues I saw pertained to occasional sloppiness (which happens with young players) and getting outrebounded when Şengün was off the floor. So, the only adjustment I’m looking for the Rockets to make is for them to insert a 6’8, 230-pound man from Spain into the lineup. Usman Garuba, whenever he gets the chance to play, will give the Rockets a much-needed presence in the paint, which will help prevent Houston from getting dominated on the boards when Şengün is off the court.

Some defensive adjustments. I saw plays where the Rockets couldn’t get back in transition. I also had a couple of problems with one-on-one where a guy would blow past their man, but overall down the stretch, it was solid. Credit to Coach Weaver!

Some adjustments going into the next game would be more pick-and-roll play from the guards and trying to get Jalen Green and KJ Martin going downhill towards the rim even more. Honestly, this was a pretty satisfying game schematically though given the roster construction of this summer league squad.

It was great to see the Rockets come out strongly and win with three of their four 19-year-olds playing well. Be sure to follow our contributors on Twitter and stay tuned for the next roundtable!