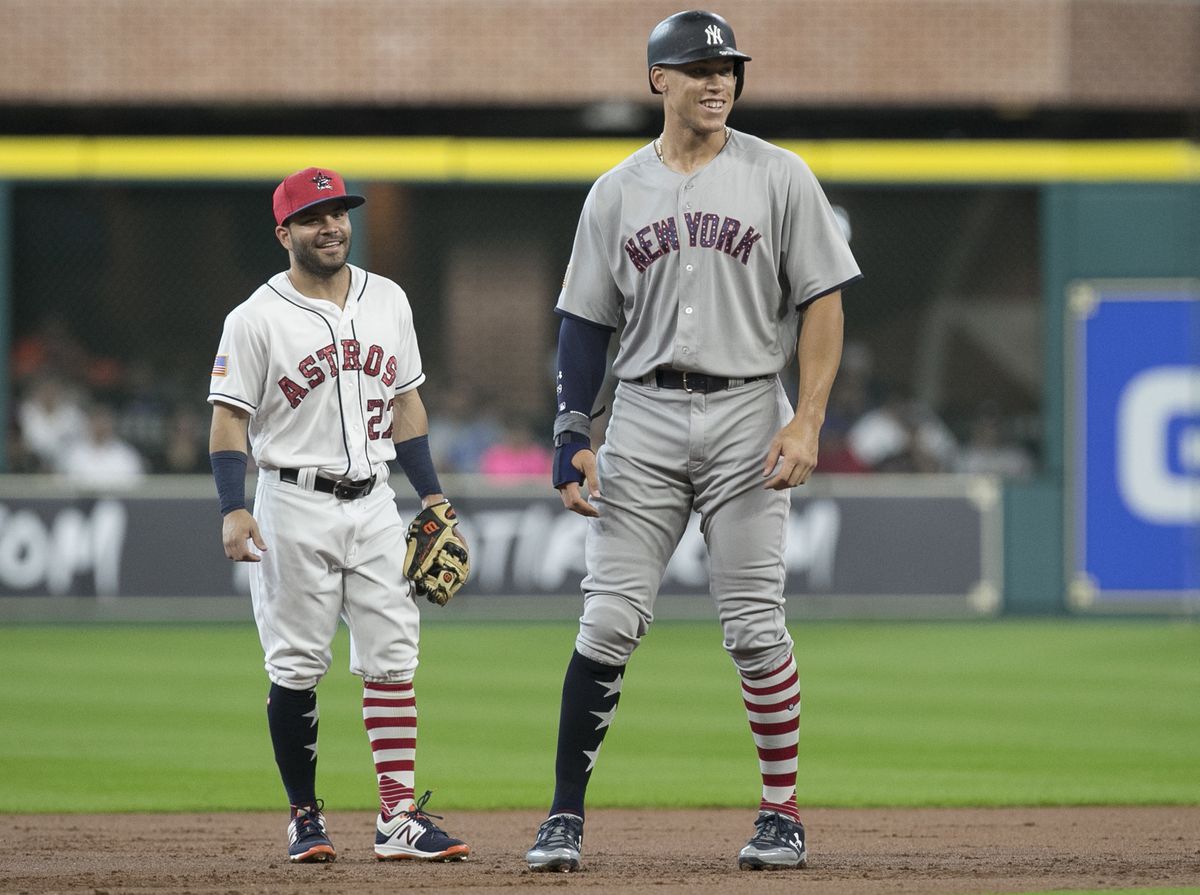 There’s nothing quite like the saltiness of Dodgers or Yankees fans on social media who continue to believe they were cheated out of a championship by the Astros in 2017. Equal parts funny and puzzling, there’s no shortage of crazy assertions made by these fan bases. One in particular is the idea that Jose Altuve “stole” the 2017 AL MVP award from Aaron Judge.

The very idea is nonsensical on its face. Claiming that Altuve stole the award would mean Judge somehow had ownership of it or a claim to it, which isn’t true. The award doesn’t belong to anyone until the BBWAA reveals the voting results, and in this case there’s no dispute. Altuve received 27 of the 30 first-place votes, so the voting wasn’t close. It’s not as if Altuve had any control over the voting, so any claim that he “stole” the award is just ridiculous.

That’s not to say there isn’t a legitimate claim to be made that Judge had the better season. He had the edge in Baseball-Reference WAR (8.0 for Judge vs. 7.7 for Altuve), had the higher on-base and slugging percentages and had significantly more home runs and RBIs. Altuve led the league in hits and batting average and had 32 stolen bases (Judge had nine), so they were just two very different players. But there is one main reason why voters chose one over the other.

A Tale of Two Halves

Voters can, even unintentionally, be swayed by a player’s more recent performance. Consistency is also something that can make a player look more favorable. Those two areas are where Altuve really separated himself from Judge and what ultimately made the difference.

Altuve was much more consistent, slashing .347/.417/.551 in the first half and .344/.401/.543 in the second half. As Judge began to slump in July, Altuve flourished with a .485 average that month. He hit better than .300 with six homers in August while Judge was floundering, which is basically what sealed the deal. A strong September wasn’t enough for Judge to regain his spot as the favorite. The damage was already done.

Diving even further, Judge’s first half was buoyed by an abnormal and unsustainable .426 batting average on balls in play, which show he likely benefited from some good luck. Altuve’s first and second half batting average on balls in play were almost identical. There’s no doubt Judge had one of the better first halves we’ve seen in recent years, but the MLB season is a marathon. When you disappear for two months, it puts you behind someone who was consistent throughout the year.

Of course, much of the reason why Yankees fans think the award was “stolen” has nothing to do with numbers. Yes, the Astros did employ a method of illegal sign stealing during the 2017 season – no one disputes or denies that. But the evidence all points to the fact that Altuve did not participate in the scheme, did not want any trash can bangs during his at-bats, and would get upset during the rare times his teammates would attempt to signal the incoming pitch to him.

The numbers back that up. The Astros employed this scheme at home, where Altuve hit .311/.371/.463 in 2017. On the road that year, he hit .381/.449/.633 with more hits, doubles, homers, and walks, and fewer strikeouts than he had at home. It’s hard to argue his performance was aided by the sign stealing when he performed much better on the road.

But do you know who did perform markedly better at home? That’s right – Judge hit .312/.440/.725 with 33 homers at Yankee Stadium and .256/.404/.531 with 19 homers on the road. The Yankees have also been accused of stealing signs and were busted by MLB that year for an improper use of a dugout phone. Anyone accusing Altuve of cheating is doing so from a glass house.

Now I’m not accusing Judge of cheating, and these numbers aren’t proof. His strikeout and walk rates were very similar between his home and road games. And let’s face it – it’s easier to hit a home run in Yankee Stadium than it is in most other parks. I just think he had a prolonged, unsustainable hot streak in the first half of 2017 and was due to regress as opposing pitchers figured him out. His career slash line of .275/.387/.552 is more in line with the type of player he really is.

So in the end, Altuve is the one and only 2017 AL MVP, and he’s more than deserving of it. Anyone who says otherwise is either living in a fantasy world or relying on misinformation or outright lies. Nothing was stolen; the writers simply awarded the honor to the best player over the course of the entire season, and they got it right.