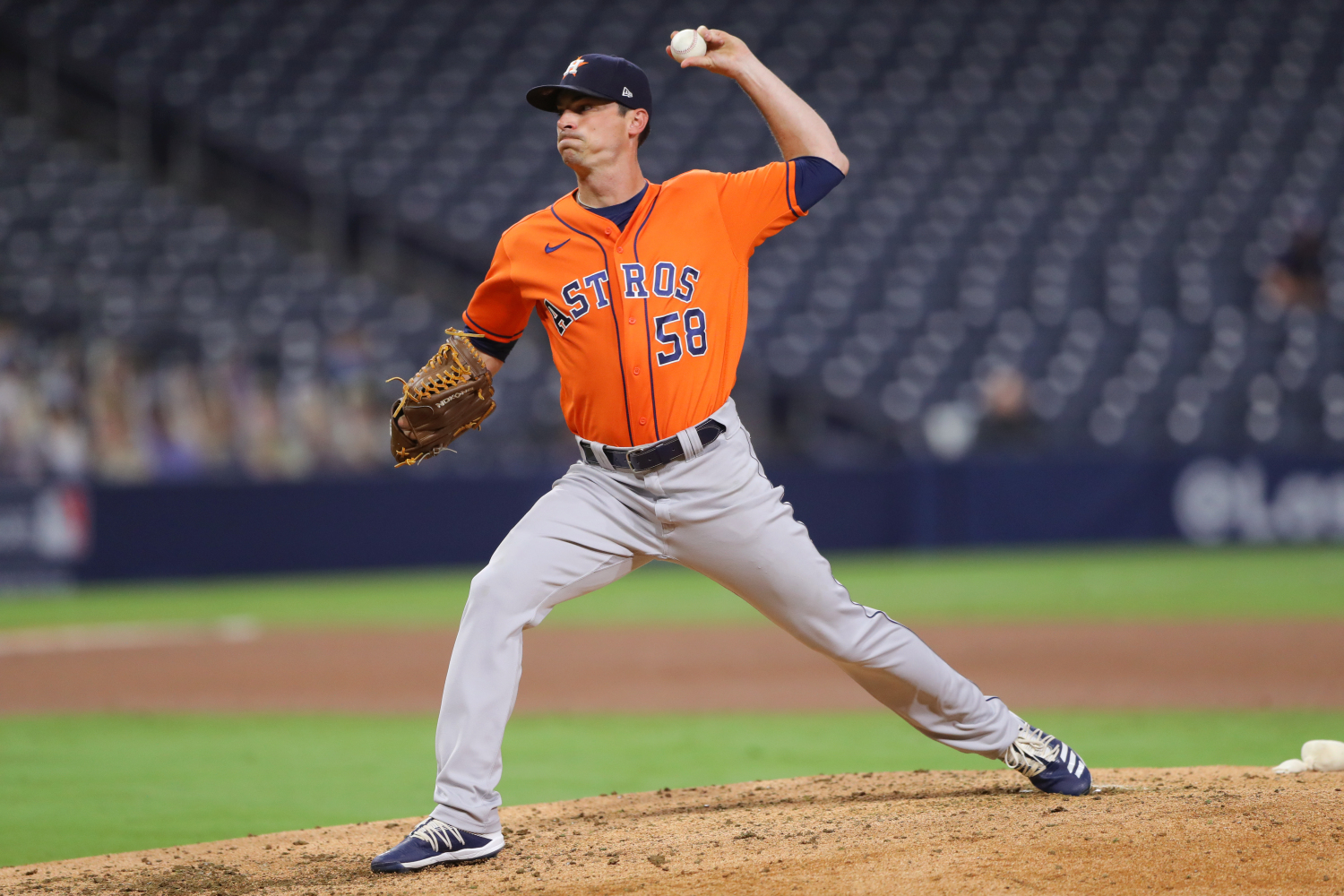 SAN DIEGO, CA - OCTOBER 17: Brooks Raley #58 of the Houston Astros pitches in the fourth inning during Game 7 of the ALCS between the Tampa Bay Rays and the Houston Astros at Petco Park on Saturday, October 17, 2020 in San Diego, California. (Photo by Alex Trautwig/MLB Photos via Getty Images)

The oft-maligned Astros bullpen has about a month to sort itself out before the postseason begins. Barring injury or other surprises, we know that the trio of Ryan Pressly, Kendall Graveman and Ryne Stanek will be on the postseason roster and relied upon by manager Dusty Baker for key outs late in games. But what of the rest?

The Astros will only need four starting pitchers in the playoffs, which means they could end up with a 10-man bullpen if they so desire. Considering the fact that starting pitchers seemingly pitch shorter and shorter outings every October, that may be the way to go.

At this point it looks like Lance McCullers, Framber Valdez and Zack Greinke are basically locks for the rotation. The final rotation spot could come down to whether the Astros want to use Luis Garcia as a multi-inning relief weapon since he’s already thrown so many innings this year, or if they want to keep him in the rotation. If Jose Urquidy pitches well in September, it could make for a tough choice.

With that in mind, here’s how the team’s relief candidates stand as we head down the stretch.

Javier should be no surprise. Overall, he’s pitched to a 2.90 ERA in 87 innings this year, including a 2.58 ERA in 20 relief appearances. He’s already proven to be a valuable guy who can give you two or three innings at a time, although his walk rate has jumped since his move to the bullpen. Still, he should be there barring injury or a complete collapse.

Baker is undoubtedly going to want at least one lefty, and realistically he’ll probably want both Taylor and Raley. Both have been effective against lefthanded batters this season, though neither has been particularly good against righties. It’s not always easy to use them in this era of the three-batter minimum, but they should both be there anyway. Baker will want them.

Yimi Garcia has a strong 1.154 WHIP and 2.35 FIP since coming over in a pre-deadline trade with Miami, and his track record suggests he’ll be a solid option when needed. He won’t necessarily supplant anyone in the Stanek/Graveman/Pressly trio, but he can serve as a valuable bridge to those guys. Finally, whichever of Urquidy or Luis Garcia doesn’t stay in the rotation will undoubtedly be on the roster as a multi-inning relief option.

Barring a series of injuries or a Verlander-like run down the stretch, Odorizzi will find himself on the outside looking in when it comes to the postseason rotation. One day he’ll throw five scoreless innings and the next outing he’ll get shelled, and the Astros need better consistency from their starters in the playoffs. But if Urquidy or someone else isn’t able to go in October, the Astros could keep Odorizzi on the roster as a long reliever to use if they’re really far behind or really far ahead.

Maton has flashed good stuff, but to say he’s been inconsistent would be putting it kindly. His 1.575 WHIP in 13 appearances since coming over from Cleveland is not good, and he’s allowed at least one baserunner in all but one of his Astros appearances. He could pitch himself into a better role with a strong September, but as of now he’s fighting for one of the final roster spots.

Bielak was just recalled to the active roster, so he has a chance to make a statement. His 5.26 ERA in 23 relief appearances isn’t inspiring, but his peripherals look better. He’s also pitched really well in Triple-A. It’s an outside chance, but he could find himself as the last man in the team’s October bullpen.

Possibly the biggest wild card right now is James, who was just added back to the major league roster on Tuesday. After missing most of the season recovering from hip surgery, he pitched to a 1.53 ERA and 1.302 WHIP in 18 appearances at Triple-A. We know he has great stuff, so we’ll see if he can look like the guy we saw in 2018 and 2019. If so, he could pitch his way into October.

Baez is on the IL, and even though he pitched relatively well in his four major league appearances, his velocity was noticeably down. At this point he just needs to work on getting that back in time for next season. Montero is also on the IL and did pitch well for Houston, but it’s unlikely we see him in the playoffs. Scrubb did not pitch well this year and just started a rehab assignment, so he’s well out of the picture too.

Paredes couldn’t stop walking people this year and had a poor 1.583 WHIP and 6.4 walks per nine innings in the minors, so he’s not a strong candidate despite being called back up for September. Abreu may have the best shot out of this group, but he’s also struggled this year (5.75 ERA) and is currently in the minors. He would only enter the picture if a few injuries took place.