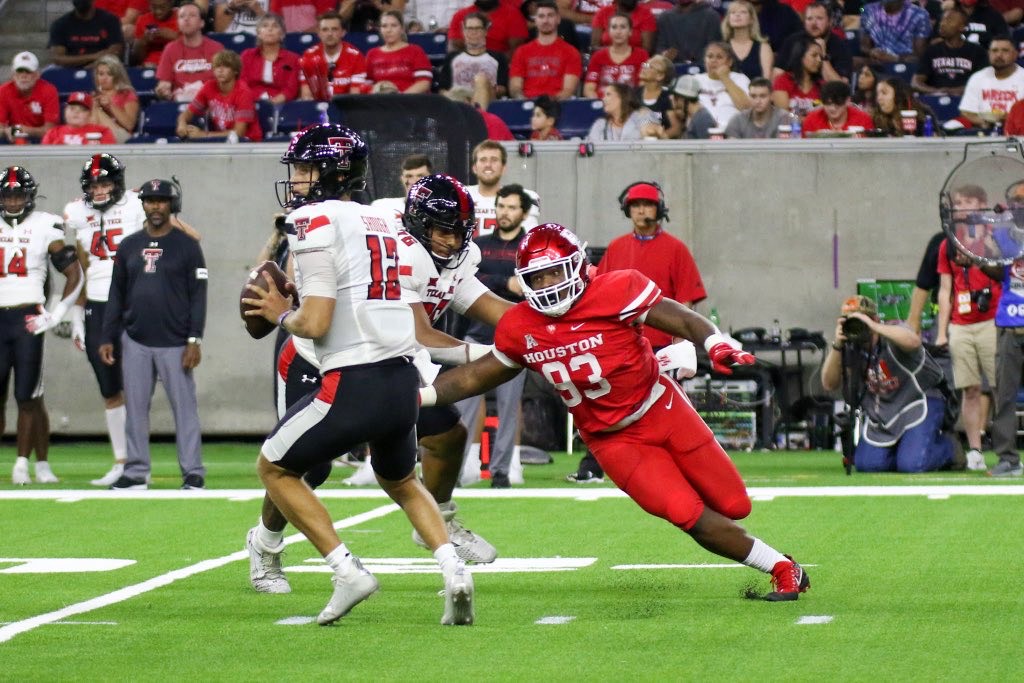 The University of Houston couldn’t have asked for a better start against Texas Tech on Saturday evening at NRG Stadium.

UH started the game with a long drive that ended in a touchdown, and even succeeded with an onside kick on the following possession to score another touchdown.

The Cougars led 21-7 at halftime, and then it all went downhill from there as UH did not score a single point in the second half and lost 38-21.

Here are the ups and downs of Saturday’s game against the Red Raiders:

The UH football team was given the chance to receive the ball first, and they made the most of it. The Cougars put together a 16-play, 75-yard drive that lasted 8:23 and was capped off by a one-yard touchdown run by quarterback Clayton Tune.

UH went for it twice on the fourth and short opportunities that presented themselves during the drive, and Tune completed five of his first seven passes that went for 18 yards, and he added 38 rushing yards.

Following the Cougars’ long first drive of the game, head coach Dana Holgorsen’s team went immediately with an onside kick and were able to recover.

The Cougars then turned the stolen possession into an eight-play, 54-yard drive that ended in a 23-yard touchdown catch by sophomore Nathaniel Dell. Texas Tech’s offense did not touch the ball until just over the two-minute mark in the first quarter.

Ending to the first half

After struggling for much of the second quarter, the UH offense was able to put together a 13-play, 75-yard drive that ended in a nine-yard touchdown catch for tight end Seth Green.

The drive was set up by a sack from defensive lineman Sedrick Williams and linebacker Malik Robinson, who both got credit for bringing down Shough and forcing the Red Raiders to punt.

While the lopsided score may say otherwise, the Cougars’ defense held its own against Texas Tech’s air raid offense for much of the game, until the final three minutes of the game.

After a slow start, the Cougars’ defensive was able to create a lot of chaos for Shough and Texas Tech’s offense, finishing with three sacks on the game, a couple of which came in crucial third down situations. Defensive lineman Derek Parish had one of them.

Doug Belk’s UH defense got off to a rough start to open up the game against Texas Tech.

The unit gave up two chunk plays during the Red Raiders’ first two offensive drives, and while Marcus Jones and the defense was able to salvage Ezukanma’s big play during the first drive, the Cougars were hit with a 48-yard rush to the house by Texas Tech running back Tahj Brooks.

The junior quarterback had his flashes, but for most of the game, Tune struggled for much of the night against the Red Raiders’ defense.

The second in the period came after he threw a bullet pass to tight end Christian Trahan that slipped through his hands and straight into Texas Tech defensive back Eric Monroe.

After putting up 21 points in the first half, the UH offense looked like a completely different unit, struggling to just pick up a first down throughout the two quarters.

The Cougars seemed demoralized at the end of the game, allowing Texas Tech to score two touchdowns in the final two minutes of the game that ballooned up the Red Raiders’ lead to 17.

In this article:Clayton Tune, Dana Holgorsen