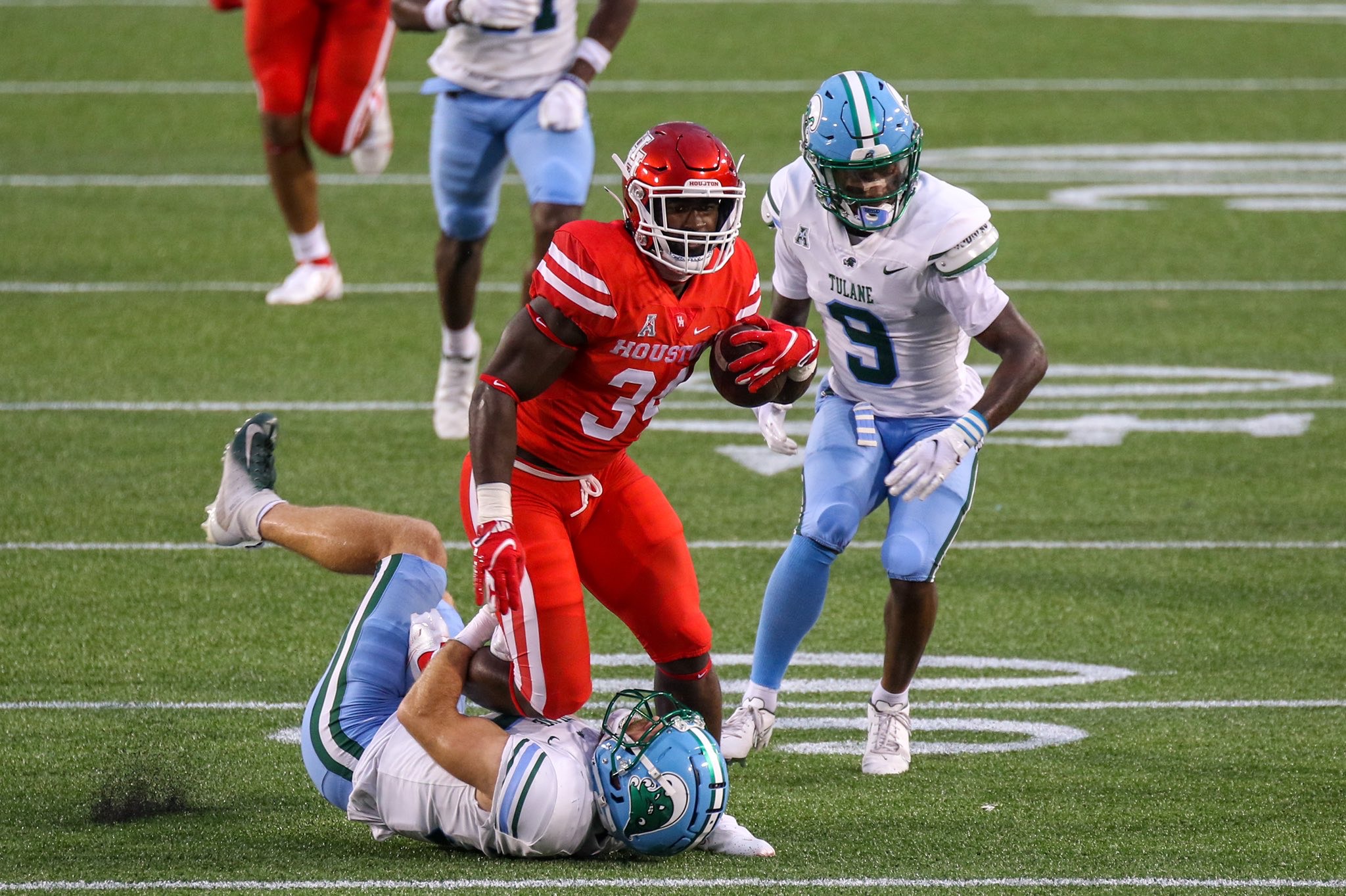 University of Houston running back Mulbah Car (34) runs through a Tulane defender during the 2020 season opener on Oct. 8, 2020 at TDECU Stadium. UH plays Rice on Sept. 11. (Photo by Mario Puente)

The University of Houston football team, off the heels of the Big 12 announcement, is looking to turn the page after last Saturday’s pitiful second-half performance against Texas Tech when it faces Rice.

The Cougars (0-1) were held to an abysmal 53 total yards of offense and were outscored by a whopping 31-0 in the second half against the Red Raiders, but head coach Dana Holgorsen stood pat with his quarterback, junior Clayton Tune, as his team prepared for the Owls.

“Clayton’s our quarterback and he feels responsible for the performance,” Holgorsen told reporters during Monday’s availability. “He owns it and we’re going to work hard to get better.”

Tune went 27-of-38 passing the ball against Texas Tech for 174 yards and two touchdowns, but threw four brutal interceptions, one of which was returned for a touchdown by Red Raiders linebacker Riko Jeffers.

Following the loss, Tune said Texas Tech did an excellent job at tempting the Cougars to run the ball and making it seem like they could exploit them that way but shutting them down instead.

After the game, Holgorsen also mentioned how Tune did not have a lot of time to throw the ball throughout the night. The UH offensive line gave up four sacks and 11 tackle for losses against Texas Tech.

“We feel like we missed an opportunity last weekend,” offensive lineman Kody Russey said. “We were up in the first half, and then in the second half we didn’t play well at all … We all know we can do it, but we got to prove it and put a whole game together.”

The Cougars offense will be eager to turn the page against the Owls.

Matching up against the Owls

Rice enters Saturday’s game after losing to Arkansas 38-17. Despite the lopsided score, the game was a one-possession contest for much of the matchup until under the five-minute mark in the fourth quarter.

The Owls’ quarterback duo of redshirt sophomore Wiley Green and redshirt freshman Luke McCaffrey both played significant time against the Razorbacks, and are a pair that, along with the rest of the offense, provide unique challenges to defenses, UH defensive coordinator Doug Belk said.

“If you’re out of position, they’ll find weaknesses in your defense,” Belk said. “They present a lot of issues, not only for the defensive line, but on every level because they run hard, they play hard, and they’re well coached.”

Green went 12-of-24 and accumulated 152 yards and a touchdown, but he also threw three interceptions. McCaffrey completed 5-of-10 passes for 75 yards.

The biggest receiving target for the Owls’ duo was redshirt sophomore August Pitre III, who made four catches for 97 yards and a touchdown. Rice struggled to run the ball against Arkansas, putting up only 99 rushing yards on 39 carries.

Despite the low number on the ground for the Rice, it is something the UH defense struggled stopping against the Red Raiders at times, allowing multiple chunk plays, which led to Texas Tech running back Tahj Brooks running for 134 yards.

“They’re going to try to run the ball down your throat,” UH linebacker Donavan Mutin said about Rice. “They’re going to see who wants it more … It’s not just one thing we have to be good at or prepare for this week.”

Overall, the defense is looking to improve from a decent but not good enough performance against Texas Tech, Belk said. The Cougars played well for 51 of 57 plays against the Red Raiders, and in those six plays, the defensive unit allowed the opposition to do a lot of damage, he added.

Entering the week, multiple UH players said the game against Rice was a must win. Saturday’s game against Rice will be for the Bayou Bucket trophy, but in many ways for much more with the added pressure of the Big 12 news as well.

“A must win in my opinion … I think both programs are just hungry for a win right now,” UH defensive lineman Sedrick Williams said on Tuesday.