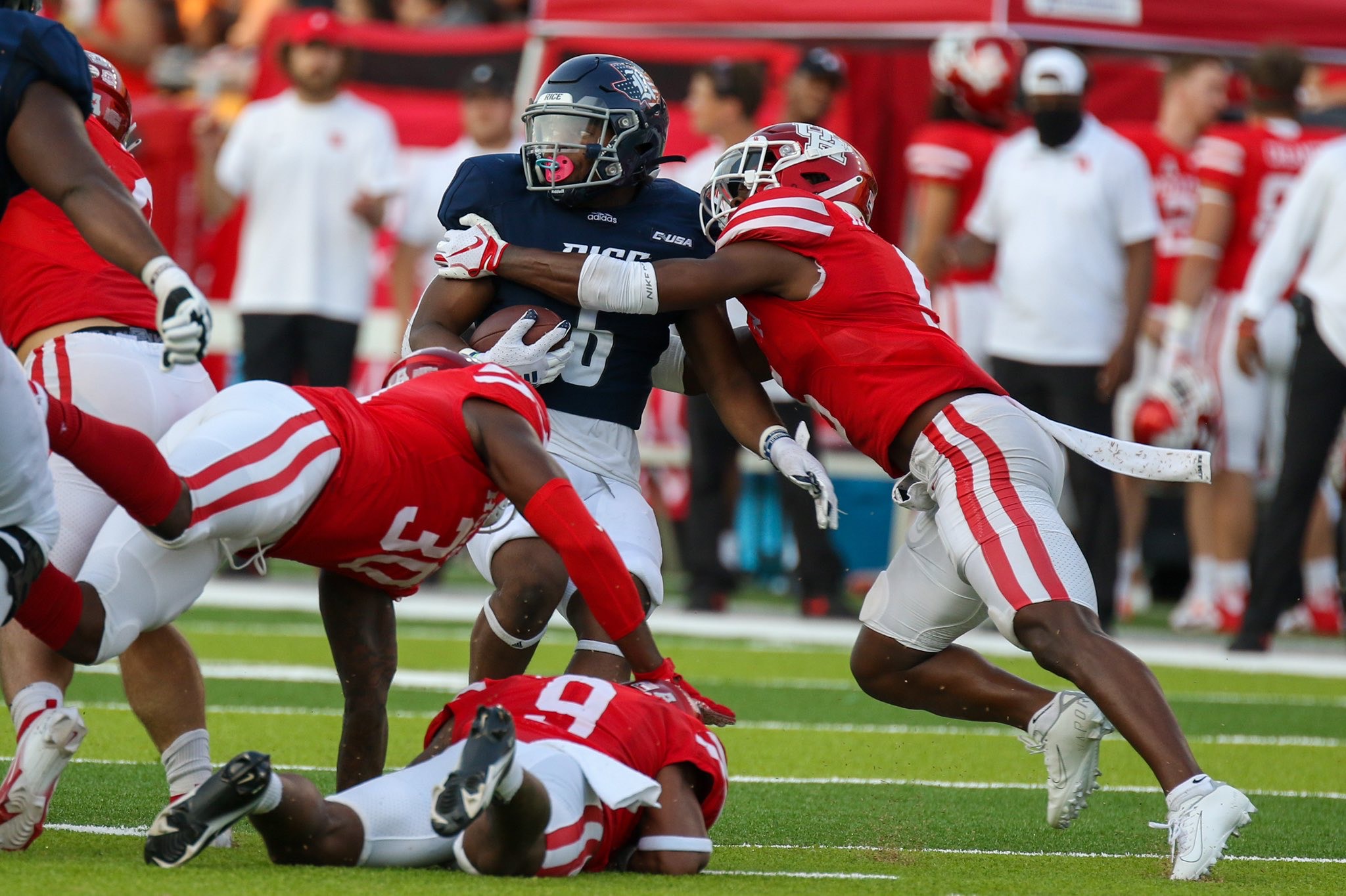 The University of Houston defense collapses on Rice running back Khalan Griffin. The Cougars forced three turnovers in their win against Rice. UH looks to win consecutive games for the first time under Dana Holgorsen. (Courtesy Mario Puente)

The University of Houston football team will look to achieve a first under the era of head coach Dana Holgorsen—win back to back games.

The Cougars (1-1) will get the opportunity to do just that on Saturday when they host Grambling State (1-1) at TDECU Stadium.

“We’re going to respect our opponent no matter who we play,” Holgorsen told reporters on Monday.

UH is coming off a dominating performance against Rice last Saturday. The Cougars intercepted Rice quarterback Luke McCaffrey three times throughout the night, and Houston quarterback Clayton Tune shook off a rough opening week with a 236-yard, two-touchdown passing performance.

In the win, UH wide receiver Nathaniel Dell had a good outing, tallying 87 yards on seven catches. Freshman running back Alton McCaskill also put together a strong performance, finishing with 91 scrimmage yards and three touchdowns and has garnered high praise from his head coach.

“There’s nothing he can’t do, he did not look like a freshman to me at all,” Holgorsen said. “We felt like he was our best option in the passing game, he was our go-to guy. I think he’s going to turn into a feature back and a complete back.”

As for the Tigers, they are coming off a shutout loss to Southern Mississippi last Saturday. Grambling State played two different quarterbacks: junior Aldon Clark, who went 8-of-19 passing for 60 yards and an interception, and junior Elijah Walker , who went 8-of-13 for 30 yards. The Tigers put up only 141 total yards of offense.

“For us the standard is always the standard,” UH defensive coordinator Doug Belk said. “We’re going to respect each opponent that we play. We won’t treat Grambling any differently than we treated Texas Tech or Rice.”

Outside of the three takeaways against Rice, the Cougars defense recorded four sacks and seven tackles for losses.

One of the goals that the UH defense has, and has focused on since offseason workouts has been on creating turnovers and being the most physical and tough team each time out on the field, Belk said.

“We are trying to be a top 25 defense in the country,” redshirt freshman linebacker Mannie Nunnery said.