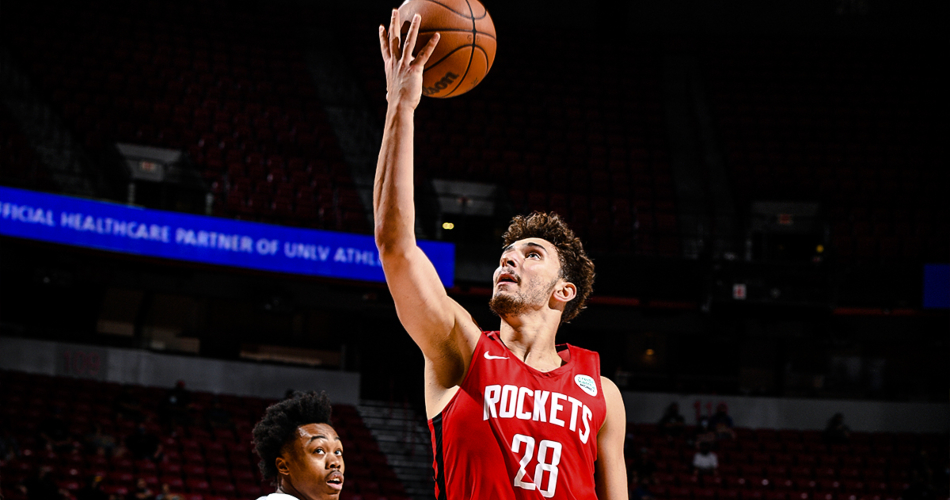 Al P, a 6ft10 center, is one of the brightest amongst the Rockets new crop of rookies, and one could say: He couldn’t be happier about it!

Sengun didn’t spend his last year prior to the NBA in college like most guys, instead he grew and developed through Turkey’s youth leagues and eventually, last year, as an 18-year-old, was dominating Turkey’s first division. Sengun was the youngest ever last year when he won the Turkish League MVP. Averaging 19 Points, 8.7 Rebounds, 2.7 assists, 1.6 Blocks, 1.3 Steals on 63% Field Goal Percentage and 79% from the Free Throw line, Sengun looked poised to make the transition into the NBA, described heading into the draft as an analytics-backed post player known for his basketball IQ, footwork and playmaking, things that were so impressive compared to other players his age that overshadowed an apparent lack of athleticism.

Sengun was regarded by some draft analysts as a top 10 level prospect in a projected all-time great draft but be it because of concerns about his inability to speak English, lack of athleticism, perhaps outdated playstyle, he fell through the draft until pick 16. The Rockets, who had been trying to move up to 13 to take the big man were surprised and pleased to see him fall and, at 16, lined up a trade where they’d send the Oklahoma City Thunder 2 heavily protected first round picks in exchange for the ability to take Al P themselves, showing how much they valued him as a prospect. Al P was late to the news and seemed relieved during his press conference when he was finally told to swap the Thunders hat for a new shiny Rockets one!

Heading into Summer League, Sengun was one of the Rockets highlights and one of the guys that people looked forward to watching the most. He did not disappoint, coming out of the gate with an impressive 15 Points, 15 Rebounds, 3 Assists, 4 Blocks, and 1 Steal performance. His efficiency didn’t look great, but the eye test far surpassed what the stats say. The former MVP rook looked a clear cut everybody else. Being at the right place, at the right time to get blocks, collect rebounds and force turnovers, outshining Evan Mobley, who was picked far above him. Similar performances followed and the more he played, the more it showed that, while not as athletic as his peers, Sengun had a knack for the ball and a feel for the game far above what is expected of a player of his age.

During the pre-season games played thus far, Al P has mainly been coming off the bench, replacing one of Christian Wood or Daniel Theis in the starting lineup sometimes earlier, sometimes later, but watching the games, there is a clear difference between the “Sengun Unit” and the “Sengun-less Unit”, in a team that relies so heavily on young, inexperienced talent, Sengun is a breath of fresh air in the way he plays, and the first evidence of that was in the game versus the Toronto Raptors, were Daniel Theis had to sit earlier than expected and Sengun was subbed in and the Rockets immediately started flowing better on offense immediately igniting a 11-4 run that was very much running through Sengun’s outstanding know-how.

Role on the team

Sengun so far has been the first big man off the bench for the Rockets, however, I predict that this situation won’t last long. Sengun’s IQ and ability to make reads and make plays on offense has been a huge release valve to Houston’s offensive struggles thus far. A Center with this level of playmaking makes it a lot easier for the Rockets extremely young backcourt of Jalen Green (19) and Kevin Porter Jr (21) to be able to make mistakes and miss reads without the offense looking completely lost. The main worry coming in was would a Wood/Sengun frontcourt hold defensively and, truth be told, that’s still a potential problem, however, Houston’s defense with Wood/Theis has been nothing to write home about and, as such, I would say it can’t get any worse with Sengun, so you take the improvements on offense considering that the defense can’t get much worse than what it already is.

If I had to pinpoint the biggest targets for improvement for Sengun, it would have to be developing a reliable 3-point shot, we’ve seen Sengun make them on a very limited sample size but nothing that looked reliable, a lot of them going in off the backboard, bouncing around the rim before going in, etc. A reliable 3-point shot would allow Sengun to be utilized in a variety of new sets that he currently can’t run that would grant his teammates the ability to operate with more space, something key in todays NBA. Besides that, I would say another key factor would be working on his athleticism, its not nearly as bad as advertised, but being able to move his feet for someone his size will be key towards fitting him into an NBA defense, considering Center is the most important role of any defense.

Expectations for this season

I expect Sengun to be a key part of the starting lineup by January. I expect him to be gunning for an All-Rookie team by the end of the year as he looks like one of the most NBA ready rookies this year. It will all come down to how soon his contributions are realized and how soon he cracks that starting lineup