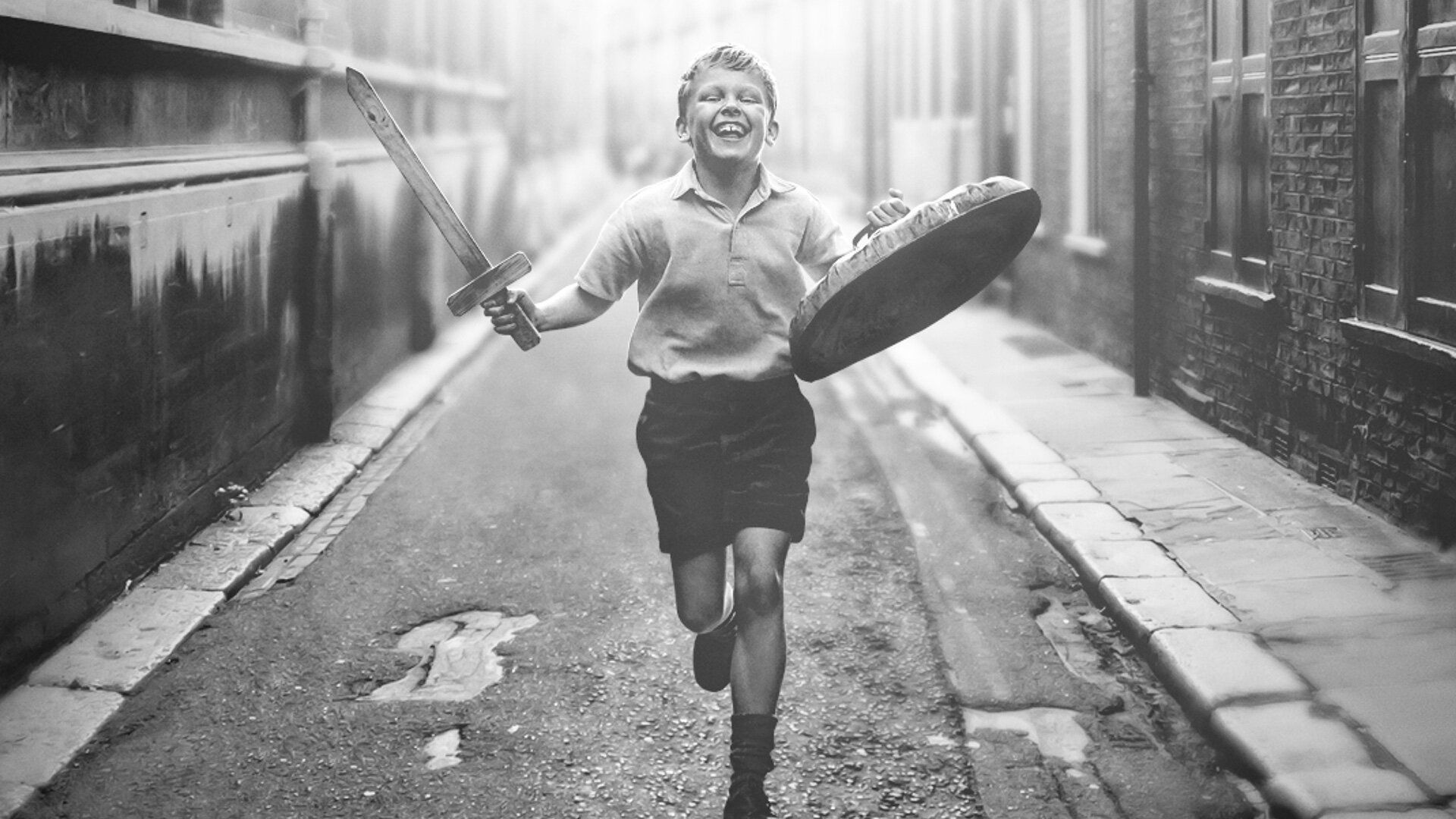 As most of you reading this will know, we are in the midst of Oscar Bait Szn. My favorite time of the year. Most major studios save their artsiest, most pretentious, self-important movies for November and December release dates when the critics and film nerds like me are ready to be dazzled right before award nominations open. #RealCinemaHours have returned.

Enter Belfast, a black and white, semi-autobiographical film from Northern Ireland-born actor turned director/screenwriter Kenneth Branagh. Set in the titular Northern Irish town during the beginning of The Troubles in the late 1960s, Belfast follows 10-year old Buddy (Jude Hill) and his working class family as they struggle to navigate the violent tensions tearing apart the only home they’ve ever known.

The film has been receiving awards buzz for its writing, performances, and direction since its premiere at Telluride back in September and Focus Features feels like they have a winner on their hands. But is it actually any good?

I’m going to wax poetic about it, but if you don’t care about all that and just want to know if the movie is worth watching I’ll give you my overall grade right off the top.

In short: Belfast is my favorite movie I’ve seen so far in 2021. The performances are spectacular and so is the direction. The film is delightful, hilarious, inspiring and visually gorgeous while being heartbreaking and tragic all at the same time. Clocking in at roughly an hour and a half it has basically none of the barriers to entry that come with typical Best Picture nominees. The Irish accents can be a bit tricky in spots if you’re not used to hearing them, but that’s part of the point. There’s something in this film for everybody and I recommend that you see it. It feels like an instant classic.

Branagh’s past work is a bit of a mixed bag. He made his name as an actor and director by doing critically-acclaimed Shakespeare adaptations. His directorial debut was the masterpiece Henry V (1989) and he was nominated for Oscars in both Best Director and Best Actor. He directed and starred in well-received adaptations of Much Ado About Nothing (1993) and Hamlet (1996) as well before venturing into Blockbusters in the 2010s. Recently Branagh has directed the original Thor movie, Jack Ryan: Shadow Recruit, the live action Cinderella, Murder on the Orient Express, and the god awful Artemis Fowl adaptation that Disney+ quietly farted out during the pandemic. So not exactly a hot streak. But Belfast is different from all the films that Branagh has done before because it’s a personal story and an ode to the place that made him who he is some 50 years ago.

Like many creatives who were forced to truly slow down for the first time in a while during the beginning of the COVID-19 pandemic, Branagh finally tried to confront the little voices in his head. And for him, they were the voices of his childhood in Belfast. Branagh wrote an essay for Empire detailing what inspired him to write the film, saying “the sound of Belfast – the music, the songs, the stories – is one that I had been hearing for the 50-odd years since I left it. Sometimes it had been faint and sometimes insistent. It had never been louder than when the recent pandemic closed in and an enforced creative hibernation awoke memories that would not be ignored. It expanded the people and the voices in my head to a volume where attention had to be paid.” The director went on to explain that his childhood in Belfast was the last time he felt that he truly knew who he was, and it felt like everyone else in town knew who they were too.

His appreciation for his hometown, the people in it, and the ways they shaped him radiates off the screen in a way I found really moving. But if you’re unfamiliar with Branagh or you don’t know that this is a fictionalization of his personal story, some of that may be lost.

The film, mostly shot in black and white, wastes no time establishing the stakes of the situation. We meet Buddy as he playfully roams through his neighborhood, happy as can be. Everyone in town knows him and his family and clearly care deeply about him. But Jude Hill, the adorable now 11-year old who stars as Buddy, soon finds himself directly in the middle of a gang of Protestants marching through the streets smashing store windows, blowing up cars, and threatening the Catholics to leave the neighborhood.

The rioting and looting feels familiar to anyone who’s watched the news at any point in the past few years, but the religious reasoning behind it felt entirely foreign to me. So I felt a lot like Buddy as he talked to his neighbors and his family, asking why Protestants and Catholics can’t all just get along. The answer is unclear, and the movie never truly explores The Troubles at-large, instead focusing on Buddy being a kid and his family doing their best to protect that innocence. That’s a choice some people may not like, but I thought it was the correct one.

The cast of adults includes Jamie Dornan (most known for starring in 50 Shades of Grey) as Buddy’s father and Caitríona Balfe (most known for starring in the tv show Outlander) as his mother alongside 2 legends in Judi Dench and Ciarán Hinds that play his grandparents. The 4 of them take turns giving spectacular performances. Dornan and Balfe have a marriage strained by finances and Dornan’s work that often requires him to be away in England and the film and their performances give that stress and strain the appropriate weight. Buddy sees it and is horrified by it at times. But they are also given moments to show that they truly love each other and want what’s best for their son. Dornan even gets to show off his singing chops at a party with a really fun song for his wife in one of the many moments of delight here. Dench and Hinds play the hilarious and wise married couple of 50+ years. They’ve seen it all in Belfast and whether it’s advice on how Buddy can impress his school crush or how the parents can make the decision to leave town Dench and Hinds had me hanging on their every word. Chuckling or being inspired by every one. It’s already been announced that each of them will be put forth for consideration in the Best Supporting categories, and early on in the season that is looking very deserved.

But the real star of the show is Jude Hill.

It’s very rare that I’m truly impressed with a child actor’s ability. Roman Griffin Davis starring in Jojo Rabbit and Julia Butters stealing a scene from Leonardo DiCaprio in Once Upon a Time in Hollywood come to mind. But neither of them carries the entire movie in the same way as Jude Hill does for Belfast. There are several moments in Belfast where the camera hangs exclusively on Buddy as noise and drama takes place off screen. Whether it’s listening to a hellfire and brimstone church sermon, overhearing a fight between his parents, experiencing the magic of seeing Chitty Chitty Bang Bang in a movie theater or witnessing a gang of thugs destroying his neighborhood, director Kenneth Branagh chooses to let you see what those moments were like for him by having Jude Hill act it all out with his face. Jude delivers every time. Witnessing a 10-year old acting in his first movie ever go bar for bar with Dame Judi GODDAM Dench is incredible. And it’s easy to see why he’s been floated as a possible Best Actor nominee. He’s hilarious when he needs to be and he’s appropriately terrified when the moment calls for that. He portrays all of the childlike wonder and curiosity that makes you miss childhood and you feel devastated for him when pieces of that start to be stripped away by turmoil. But the film and Jude’s performance remind you the core is still there. Ultimately, that dynamic and the Jude Hill performance are my favorite thing about the movie and why I recommend it to anyone interested.

With Belfast, Branagh hasn’t made a definitive history lesson on Northern Ireland’s internal conflict or even an accurate biopic about himself. But through stellar performances, incredible directing, and a wonderful screenplay Belfast is a moving tribute to the village that raised him as a child and a reminder that when we genuinely look after each other that influence will always last. Even through Troubles.

Follow me, Dex Hinton, on Twitter @DexAintDead and holla at me with your thoughts on Belfast, other movies, the Oscar races, Baylor sports, Rockets, Texans, Astros, just whatever really. I be on there just talking all day.

Follow Apollo Media’s official Movies/Pop Culture podcast One Take Pod as well @1TakePod, and listen now wherever you get your podcasts. Our latest episode was about Boogie Nights and it was one of the funniest things we’ve ever done. Check it out.