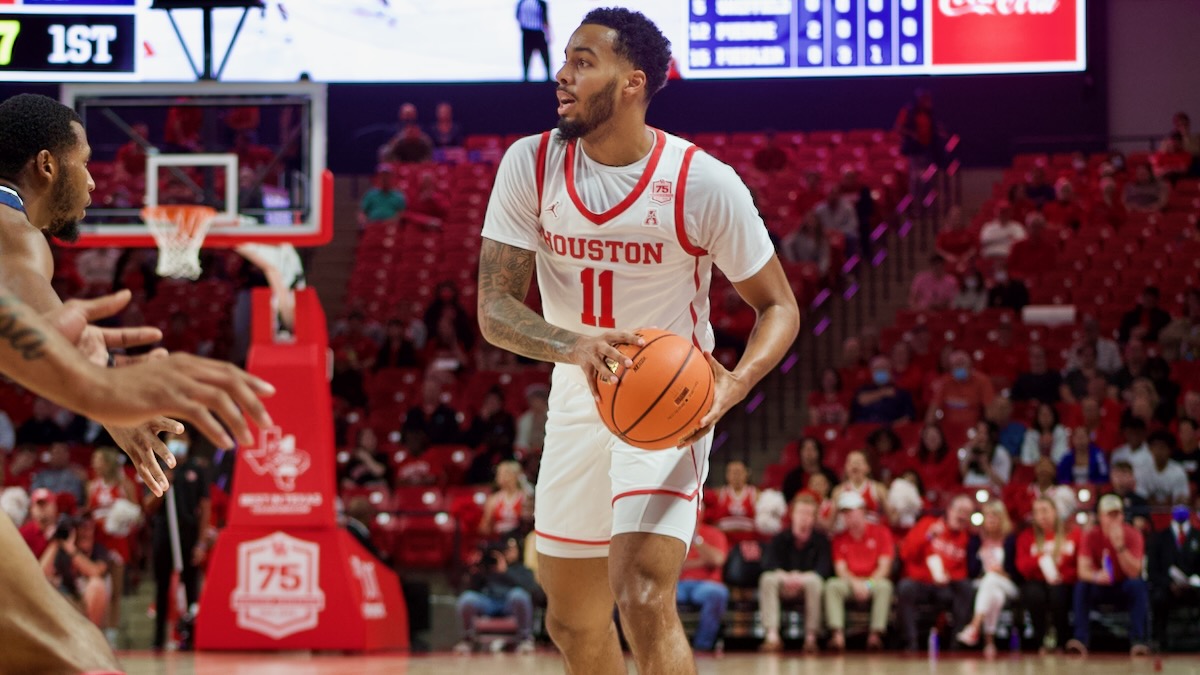 On a night when anyone and everyone affiliated with the University of Houston could do no wrong, even the fan shooting into trash cans to earn free Whataburger, the UH men’s basketball thoroughly thrashed Rice on Friday inside of the Fertitta Center.

There was no rally; there were no second chance opportunities. What happened for 40 minutes was an old fashioned spanking; a rout; a lopsided affair, and whatever other synonym you can think of—insert it here. UH won 79-46, and it wasn’t even that close.

“Credit goes to Houston,” Rice head coach Scott Pera said. “[They were] well prepared, ready to play, got us early, [and we] couldn’t dig out of a hole and against good teams on the road, that’s hard to do.”

The Cougars (2-0) suffocated the Owls (1-1) from the opening tip, which is about the only thing that went in Rice’s favor. UH forced a shot clock violation on the opening possession of the game and soon had jumped out in front to a 20-5 lead.

Friday was a complete change of script from Tuesday’s season opener for the Cougars. Against Hofstra, UH was the team that found itself playing from behind early.

The 15th-ranked team in the country couldn’t track down rebounds to finish off defensive possessions and the Pride built as much as a 13-point lead midway through the second half.

The Cougars clawed their way back in that contest, and late game heroics from the 6-5 Taze Moore forced the game into overtime where UH ultimately sealed the win.

Despite the scare, however; it proved to be more valuable for the Cougars than had it been a similar outcome to what occurred Friday, according to UH’s commander in chief.

“The first night was perfect for us,” UH head coach Kelvin Sampson said. “We struggled, guys were still looking over at me about this or that. It’s fine. It’s the first game. We lost four starters. That’s not a problem.”

The Cougars survived the Pride on Tuesday and followed it up on Wednesday, Thursday and even on Friday by breaking down the game’s film, Sampson said.

“[We] watched it [and] showed them where we have to get better,” Sampson said. “This is our second game, you saw our culture come into play tonight.”

Against Rice, the UH men’s basketball team was dominant. Not only were they dominant, but they were almost perfect. Emphasis on the almost. Houston executed its game plan as well as it could have envisioned.

UH forced 20 turnovers on Friday. It held the Owls to a dreadful 14-of-50 shooting night from the field. The Cougars did not allow Rice to get easy baskets off backdoor cuts, and at times it seemed like they had eight defenders against the Owls with the way they swarmed Rice’s players when they attempted to fire up a shot.

UH also finished their defensive possessions with rebounds, beating the Owls 42-39 in that category on Friday night, which has become expected of Sampson’s teams. And yet, there will be something from that game that Sampson will highlight the team needs to clean up. It’s not just coach speak either, his players have been taught to think that way as well. It is how UH operates.

“I feel like I still have to guard better too cause it ain’t all just about rebounding … I got to be able to guard the ball, not reaching, stay solid,” forward J’Wan Roberts said postgame.

He tallied nine rebounds against Rice, which followed up a 15-rebound performance against Hofstra.

“I just got to build on everything,” he added.

After coming back against Hofstra, Sampson said he didn’t have a good read on his young team, yet. His roster gained six new players in the offseason, three of which played 15 or more minutes in the win against Rice on Friday.

Additionally, both guard Jamal Shead and Roberts also played over 20 minutes. While they were on the team last year, their roles did not require them to play as many minutes behind an upperclassmen-led roster. In fact, Sampson still calls both of them freshman.

For the battle-tested Sampson, he knows that Friday was just one of many more games to come. It is still early in the season, and regardless of how well his team plays, or struggles, he knows they have to continue pacing for the marathon and not fall into a shortsighted trap—good or bad.