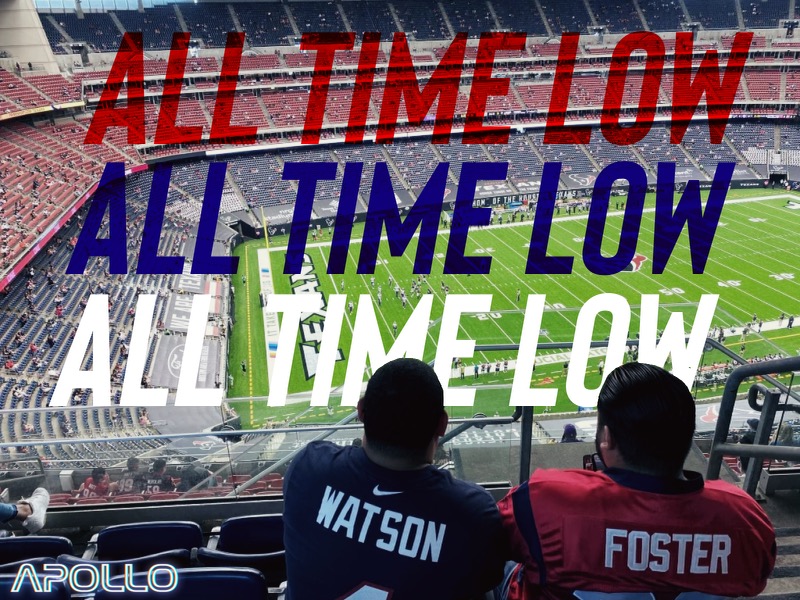 The Houston Texans put out yet another piss poor performance yesterday against the Jets, but perhaps what was even more embarrassing than losing, was how few fans that they did it in front of. The measly crowd of 65,120 didn’t make much noise outside the occasional monotone groan, and that’s pretty much the brand of energy that’s encapsulated Houston’s season as a whole – This team quite arguably represents the worst product that this organization has ever had the audacity to roll out, and it’s resulting in some historically low attendance numbers. Attendance has never once averaged less then 71K/game in NRG Stadium’s (formally Reliant Stadium) recorded history; this team is currently averaging 67,000 per game with zero indications that it’ll spike back up. Galleries of pics & videos have circled the internet that expose just how empty this ghost stadium has been in 2021. It’s downright shameful. Do you realize how many people you have to drive away to have ninth least total attendees in the nations fourth largest market? It seems like this is the year that Texans fans finally say enough to being spoon-fed bullshit & begin actually following through on their longstanding threats to boycott the current regime.

In all honesty, who the hell in their right mind would spend their hard earned money to go watch this shit show? The drives Tyrod & Co. have been putting together are hilariously harmonious with how god awful this offense has been all year. It’s the worst in the league & it’s not even close. Tim Kelly’s squad ranks dead last in points, points / game, yards, yards / game, rushing yards, rushing yards / game, and the only team worse than them at throwing the football is Chicago. Apparently the plan for the backfield this season was to renovate an old folks home into a running-back room, so now their brittle bodies are dropping like flies & the ground game has been damn near eliminated… For size, the guy who currently leads the team in rushing by over 100 yards got traded away over a month ago. Although the coaching staff has repeatedly said that they want to get Brandon Cooks more involved, he was only targeted 5 times against the worst pass defense in the NFL, despite making a spectacular first-half TD snag. It’s mindboggling that some of these people have jobs in the NFL because nothing they do makes any damn sense!

As for the defense, it almost feels sabotaged by Jack Easterby’s presence… Star Safety Justin Reid was a healthy scratch from Sunday’s start for disciplinary reasons, something concerning an argument between Reid & a coach. Geez I wonder who dictated that soft ass punishment, because it sure as hell doesn’t sound like Lovie Smith! Speaking of Lovie, his ass is 100% going to be on a one-way ticket out of here as soon as the season ends. The way that he’s turned toilet water into gas station wine has been impressive – The schemes that he’s been drawing up have made Houston both extremely effective at disguising coverages & forcing interceptions. Just think of what he could accomplish without having to deal with the ever looming threat of Jack fucking with his roster & shipping off anyone who doesn’t fit his weird mold (Robey, Mercilus, Omenihu, etc).

Obviously Houston isn’t winning anything anytime soon, so one would typically be right to assume stacking up draft assets & young talent to be productive moves, but this is the Texans we’re talking about. They have a proven track record of getting fleeced in trades, not being able to draft for shit & consistently maintaining a status as one of the worst spots in the league for player development. This franchise is 2 decades old & has never sniffed a conference championship game. It’s entire history is personified by bad coaching & even worse front office decisions. Incompetent ownership has allowed the culture within to develop from virtually unrecognizable to downright toxic. In the end however, the fact which must be the most aggravating to fans is that the team has absolutely no vision, for now nor the future. Texas is the Mecca of football, there are no casual fans down here, folks know what their dealing with. The only true influence that sports fans have on their respective teams is their ability, as a collective, to hurt the owner’s pockets. It’s great to watch Texans fans begin to utilize this power, but it’s important that they stick to it. The Texans’ majority shareholder, Janice McNair, is an 85-year-old art coinsurer who doesn’t give a single fuck about football. If there’s one thing about billionaires, it’s that they like staying billionaires, so I can totally see her telling Cal that he’s done playing office after a couple more seasons in the red. Houston deserves an owner who cares about how their team represents the city, but we have to make them give it to us. Don’t buy merch, don’t go to the games, just sit back and watch how pivotal patience can be.