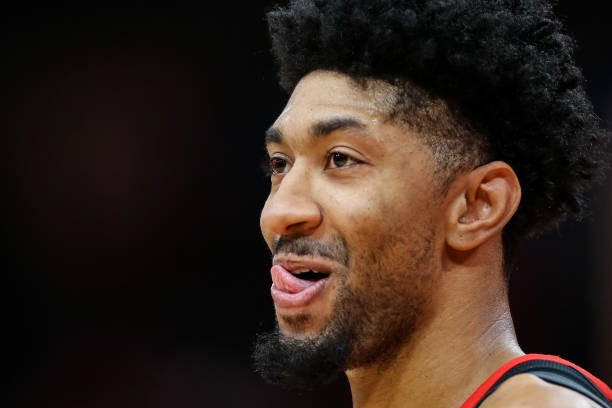 HOUSTON, TEXAS - NOVEMBER 29: Christian Wood #35 of the Houston Rockets looks on during the second half against the Oklahoma City Thunder at Toyota Center on November 29, 2021 in Houston, Texas. NOTE TO USER: User expressly acknowledges and agrees that, by downloading and or using this photograph, User is consenting to the terms and conditions of the Getty Images License Agreement. (Photo by Carmen Mandato/Getty Images)

The Houston Rockets were the definition of down bad. They had just lost their 15th straight game, this time to the Celtics on the road. Christian Wood, their best player, just recorded his 2nd 4 point game of the season. Jalen Green, who had looked so good in the past couple of games, only made 2 field goals. Jae’Sean Tate looked unplayable, and the starters were run off the court once again.

It feels wrong to say that not playing a reliable NBA player in Daniel Theis was always the answer. Or that fans, who are often reactionary and lack a great understanding of the game, knew better than the coaching staff all along. But the results speak for themselves.

The Houston Rockets have won their last 3 games, 2 of them being against teams who had top 10 records in the NBA at the time, and own the 4th biggest win streak in the league. So first of all, let’s figure out why’s that happening.

Would it shock you to learn that the Rockets’ defensive rating is actually nearly identical to their defensive rating in the first 16 games of the season, of which they only won 1 game? You’d probably expect that inserting 6’5 Garrison Mathews into the starting lineup instead of veteran big man Daniel Theis would lead to worse rebounding and/or paint defense, but that hasn’t been the case.

In fact, the Houston Rockets’ defensive rebounding percentage is 4% better during this winning streak than before! Largely due to a strong increase of 4+ rebounds per game by each Christian Wood and Kevin Porter Jr, the Rockets have actually been doing better on the boards, and not just against OKC.

The only substantial difference on defense has been the number of fast-break points allowed. As it turns out, putting the ball through the basket helps you defend on the other side of the court, more often than not. This brings me to my next point- the offense.

The value of spacing

The Rockets’ offensive rating has skyrocketed during this winning streak. They have an offensive rating of 115 over the past 3 games, 18 points per 100 possessions better than the previous 16 games. By comparing the stats, you’d see better statistics across the board, but I’d like to focus on 3 different improvements, which are all connected: The number of turnovers, assists, and 3 point attempts.

You’ve probably heard about how the Rockets were turning the ball over at a historically high rate during the losing streak. It was impossible to miss. But what was missed is how the Rockets averaged less than 20 assists per 100 possessions, which would’ve been the first time since the 2017 Pheonix Suns. Averaging a low number of assists was cool with James Harden and Chris Paul isolating defenders into oblivion, but with this roster, ball movement is needed.

So the Rockets have suddenly turned into the prime version of the Golden State Warriors in regards to ball movement after being historically bad at it, with one lineup change? What? Let’s slow down and take a look at the film.

Here is an example of a turnover that happened way too often during the massive losing streak. The Rockets are trying to run a pick and roll between Jalen Green and Christian Wood. However, Daniel Theis is placed at the dunker spot, since defenders are more than happy to help off of him in the perimeter, and Jae’Sean Tate, who is having a horrible shooting season at 25 3PT%, is spotting up in the corner next to him.

Jalen rejects the screen, drives, draws the help, and tries to make the dump-off pass to Theis, which is pretty much impossible due to Desmond Bane’s rotation off of Tate, turnover. Can we really be surprised Jalen Green is averaging more of those than assists?

And now let’s take a look at a play that has finally become a staple of the offense during the winning streak- the Kevin Porter Jr pick and roll with Christian Wood.

In the play above, the Rockets are running an empty corner pick and roll of the 2. Kevin Porter Jr decides against throwing a pass to Christian Wood, taking the extra dribble instead, which creates a passing lane to the wide-open Jalen Green in the corner.

This play is just 1 example of the multiple options Kevin Porter Jr can choose from during a traditional pick-and-roll attack with Christian Wood, one of the NBA’s best pick-and-roll bigs. Teams don’t like switching their center onto a guard, and the unwillingness of the defense to switch ball screens with Christian Wood has been a huge component of Houston’s recent offensive success.

Kevin Porter Jr hasn’t been efficient at all during the winning streak, yet the fact that the streak started immediately when he returned to the lineup is no coincidence. His scoring in the pick and roll has been problematic, and giving such a significant offensive load to a player playing a new position will always result in some struggles.

He’s slowly but surely getting accustomed to the point guard role and the reads which exist against different coverages, and is averaging 10.7 assists since coming back, driving the offense to new highs.

The Rockets have been at the top of the league at MoreyBall rate (the percentage of shots that come from behind the 3 point line, free throws, and the restricted area, though I expect most Rockets readers already know) all season long. But it’s only gotten better lately, and there are just a lot more shots available on the floor that you’d want your offense to take with Garrison Mathews in place of Daniel Theis.

The flow of the offense has noticeably improved, with fewer isolations being run in favor of constant handoffs and pick and rolls featuring good shooters- the Silas offense in effect.

Playing 2 bigs, the Rockets naturally prioritized scoring in the paint as much as possible. They often did not have any better alternatives, even if getting an open shot at the rim wasn’t possible, ranking below average at 3s attempted per 100 possessions, shooting the 3rd worst percentage in the league on 3s. Since the emergence of sharpshooter Garrison Mathews, and the increased role given to Armoni Brooks, better shooters are shooting those 3s. The Rockets are actively looking to take them, ranking in the top 4 of both attempts per 100 possessions and 3PT% during the streak.

Furthermore, the defense is not trying to give them up, being reluctant to offer help at times, leading to even more restricted area attempts by the league-leading Rockets, on a better shooting percentage than before.

Unselfishness has been key across the entire roster, and Jae’Sean Tate & Christian Wood deserve credit. After starting the season primarily looking for their own shot, they’ve been excellent ball movers, averaging 4.7 and 3 assists per game, respectively. Christian Wood himself is having the best 2-way stretch of his career, playing in space and shining as a play finisher, shooting well, and just dominating the paint and the boards. Combined with the scorching hot shooting by Garrison Mathews, tremendous all-around play by Jae’Sean Tate, and the consistent productivity of Eric Gordon, the Rockets’ new starting lineup has been crashing teams with an offensive rating of 127 and a defensive rating of just 100.

So, we’ve established that the Houston Rockets have found the formula to make them a respectable and competitive team. Now what?

As fun as this team has been, we know that winning is not the main goal. Despite how good they’ve looked recently, no one has dared to bring up the phrase “play-in tournament.” Kevin O’Connor of The Ringer reported on Monday that the Rockets are expected to entertain offers for both Christian Wood and Daniel Theis- as they should.

The way Daniel Theis started so many games during the losing streak and then had all of his minutes snatched away from him immediately after the 15th straight loss makes me believe starting him wasn’t entirely Silas’s decision. Perhaps the Rockets promised him a starting spot when they signed him, and the 15 game losing streak has made it clear to all parties the fit is shaky at best.

Nevertheless, Theis has been a good, contributing NBA player for multiple years now, and the Rockets should be in asset accumulation mode.

This is going to be a process, and the Rockets have all the reasons in the world to be patient and play the long game. Only having 1 center on the floor at all times has been a big part of Rockets’ recent success, but it shows an understanding that Christian Wood is a center, not a power forward. And over the past 3 games, Wood spent exactly 1 minute on the court with Alperen Sengun.

The coaching staff clearly doesn’t think they fit together, and when it comes down to it, you choose Sengun over Wood, who will demand near-max money soon, every time.

The same goes for Eric Gordon, and the rest of the vets, who are useful players who could be of better use to other teams. The Rockets need to use the 30 or so games after the trade deadline to figure out what they have with Josh Christopher and Usman Garuba, two promising first-round picks from the 2021 draft who haven’t been able to get rotational minutes with the main team.

Winning is good for development, don’t get me wrong. The Rockets should keep playing to the best of their abilities, and put a good product on the floor. But when it’s trade deadline time, it’s just smarter to get value for the guys who won’t be on the team for the long haul anyway- and to free up minutes and touches for the younger, more inexperienced players on the roster so they can develop.

If all goes well, the young core on the Rockets roster will be much better in 5 months than they are now, and Houston will get the opportunity to add another top 3 talent at the draft.