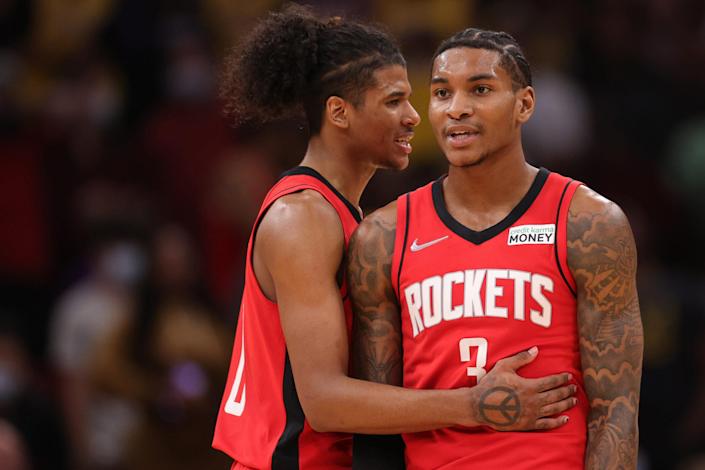 The Houston Rockets are starting to get healthy once again as two of their young centerpieces have come back from injury. Jalen Green returned last Thursday and Kevin Porter Jr. returned last night. The Rockets are still last in the West at 10-25 but have some excitement and buzz around them thanks in part to their rookies. It will be interesting to monitor them for the rest of the season and watch their growth as they improve. Houston was narrowly defeated by the LA Lakers last night, with the score being neck-and-neck deep into the fourth quarter.

We gathered a few contributors here at Apollo to give their thoughts on some questions surrounding KPJ, Green, this week’s matchups, and more. Take a look at what they had to say!

Jalen Green currently sits at 14.8 PPG. What do you think that average will be by the end of the season?

The Rockets have found their identity and everyone has improved as a result of it, including Jalen Green. I expect him to average anywhere between 18-22 points by the end of the season. The young prodigy scores at will, and he’ll continue to do so with the Rockets’ increased spacing on the court.

I think Jalen’s scoring averages will likely be between 17-19 PPG. As he gets more game experience under his belt, the averages should see a small increase.

I think it’ll definitely increase, his numbers have been tanked by playing most of his season with the no-spacing double-big lineup and since then he’s been injured. If he can stay healthy, I think he might be able to reach the 17-18 PPG mark

With the increased spacing and his leg not bothering him, I anticipate that this number could rise up to 18 points a night, possibly getting closer to 19. He can put himself squarely in the Rookie of the Year conversation.

How do you think KPJ looked in his return? He finished with 22 points, five rebounds, and nine assists.

KPJ played outstanding in his return (22 PTS | 9 AST | 5 Threes).  If he continues to play this way, he’ll cement his spot as the future PG of the Houston Rockets.

I think his return was all that you would have hoped for. One of the big concerns coming off of an injury is whether or not a player can return to a good form. It seems like there was very minimal rust in his first game back and he flirted with a triple-double.

I think KPJ looked awesome. He completely proved what the eye test hinted at when he was gone. When he’s aggressive and focused, he’s the best player on this team and he helps feed everyone. I thought he had a couple of really impressive passes and I love the confidence he had shooting the three.

This was a great return for KPJ that showed what he is capable of on a nightly basis. The 22 points on great efficiency (61.5% TS%) was encouraging, but the nine assists showed that he is adjusting to that point guard role nicely. It will be fun to watch him continue to figure things out and get better.

With everyone healthy, what is your ideal lineup/rotation for the Rockets?

This is how the lineup should look when the roster is completely healthy:

If Eric Gordon is traded, I’d insert Garrison Matthews into the starting lineup to increase the floor spacing. I could also see Augustin playing over Josh Christopher, but by the season’s end, those minutes absolutely have to go the Josh for his development.

KPJ/Green/Mathews/Tate/Wood with Augustin/Gordon/Christopher/KJ/Sengun. This is a bit of an ideal rotation within the reality of the team, I think you could easily swap Augustin and Armoni depending on the matchup.

Echoing Prod and Dalton, I think that Mathews should be the starting small forward when everyone’s healthy. It seems, though, that Eric Gordon will be that guy until he is inevitably traded. Trading some of the vets should open up more playing time for the youngsters, which should be the main focus of the second half of the season.

What Rockets game this week are you most looking forward to watching? (Heat, Nuggets, 76ers)

I’m looking forward to the Rockets game against the Miami Heat because I’ll be in attendance! Hopefully, the Rockets can pull out a win for myself and the rest of the fanbase on NYE.

I am interested in the matchup with the Nuggets and seeing how Alperen Sengun matches up with Nikola Jokic.

Definitely the Nuggets one because I believe that to be the one we have the highest chances of winning and that would be great for the young guys who have kind of slumped since the winning streak. Every game is a good game as long as the young guys are playing, though.

While each game this week has its own reason for being exciting, I think that the 76ers one has some interest for a couple of reasons. One, it will be interesting to see Christian Wood and Alperen Sengun match up with a top center like Joel Embiid. Secondly, it’s always intriguing to have Daryl Morey on the other side after having him in Houston for so long. Philly is having a tough start to the season (18-16 record), so this is one that they have to have.