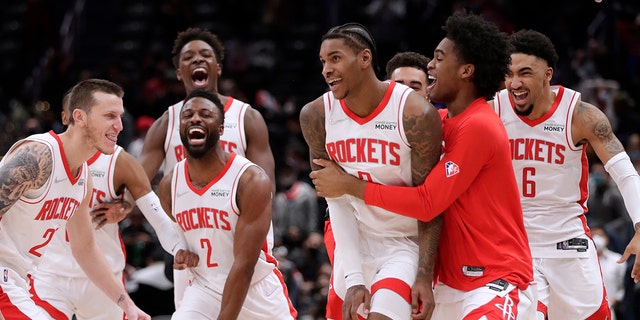 The Houston Rockets have had a rough go at things recently. They have lost 11 of their last 12 games and sit at the bottom of the Western Conference. Defensive issues have plagued them all year and they have been especially apparent in this skid.

There have been some bright spots, thankfully. Kevin Porter Jr. has struggled, but hit an awesome game-winner against the Wizards that gave Rockets fans hope. From KPJ’s future to the defensive issues of the team, we have a lot to talk about in this week’s roundtable. Let’s get into it!

What was different about the Rockets in their win against the Wizards than in their three ugly losses that followed? Is this something that can be replicated for the future?

This may be a cop out response, but I feel like the opponent was the factor in this situation. The Wizards compared to the other teams are last in the following rating:

In addition, even though the Wizards (21-20) mathematically have a slightly better record than the Timberwolves (20-21), they also have a worse record than both the Mavericks (22-18) and the Sixers (23-16). Although the blowouts by the Rockets in the other 3 games are disappointing, when comparing the numbers the Rockets were able to beat a team that is comparable to their level, and that’s not a bad feat.

In the win against the Wizards, it seemed like Washington was having a tough time making shots. Couple that with Bradley Beal fouling out and you’ve got a recipe for a win. Efficient nights from Eric Gordon and Christian Wood helped even it out.

It was a big team win. Everybody contributed, they managed to get Beal to foul out which is a big deal come clutch time, they made it a point to get Jalen Green in rhythm with multiple plays to get him layups and they played team basketball in the clutch, which usually doesn’t happen and ends up costing them close games.

Despite going against harder opponents than the flukey Wizards in their losses, the effort level from one game to the next few was the main factor here. Like Paulo said, the Rockets playing through Jalen Green is a huge difference-maker for the team and his personal development. In the win, he took 17 shots and played 33 minutes. In the losses, he had eight, 10, and 12 shots and played fewer than 30 minutes in each of them. Play your No. 2 pick, even in stinkers.

What, if anything, can fix the defensive issues that are plaguing the Rockets right now?

Decreasing the opponent fast break opportunities. Yes the Rockets are rated second in pace (101.21) and fourth in total number of possessions (4,259), but they are allowing a league worst in opponent points off of fast break (15.0) and opponents points off turnovers (21.8). In addition, the Rockets are 25th in opponents points off of second chance opportunities shows their weakness in defensive rebounding which has them at 27th in the league. The Rockets need to improve their attention surrounding cutters and rebounders when their opponents are transitioning from missed buckets as well as ensure that they are limiting opportunities for easy scoring after turnovers in order to start improving on defense.

The defensive lapses are born straight from bad communication and effort. Too many times, we’re seeing someone forget to call out a switch, or flat out refuse to switch in some cases. We see late rotations, poor decision-making, and ultimately a flat effort level from most of the team.

I think effort should fix some of it, communication some more, but ultimately this team doesn’t have the personnel to be a good defensive team while not being completely exploited on offense, so I think we’ll begin to see real improvement after the draft depending on who they select, as well as development from the young guys.

I think a lot of it has to do with the team structure. There just aren’t a lot of good defensive lineups that the Rockets can reasonably put out on the court without affecting the offense too much. I think starting KJ Martin at PF might be an option to help improve the defense, but ultimately, this is just going to be a bad team on that end.

KPJ had a great game-winner but also had some rough outings in the last week. Do you think he will still be the point guard of the future for the Rockets?

I may be optimistic, but I still believe that Kevin Porter Jr. can be the Rockets’ future point guard. Although he has difficulties making active reads against defenses, when he does have the opportunity to slow the pace, he’s able to make good reads. Two instances of this is during the last game versus the Sixers:

Assist to Daniel Theis for corner 3:

Although KPJ has a lot of room to grow, especially with reducing his bad pass turnovers and more quickly reading defenses during pressure situations, he has shown moments where the game is starting to slow down for him. I don’t think he will ever be a “traditional point guard,” but in this hybrid league where many players play multiple roles, along with having players like Sengun, Josh Christopher, and Jalen Green with PG abilities, if given the opportunity and additional training, KPJ can grow even further in the PG role. Especially since he has only been in this role for just about 80 games in his basketball career.

KPJ is a playmaker, but when the team is running the offensive scheme that Stephen Silas has instilled, it’s coming at the expense of what KPJ does best. There’s no room for him to score, which sets up the playmaking. Space is non-existent and the team doesn’t get out and run enough for the lob passes to Jalen Green on the break to be a staple in the offense.

I don’t think it matters. I think he’s the PG for this season unless something crazy happens and, in the off-season, they’ll look at it again and weigh their options. The team has once again moved away from PnR offense where KPJ thrived and its been costing him. Hopefully, they get back to that and he gets to shine again.

I think it’s possible for him to be. KPJ has shown flashes of greatness but then will follow it up with dud performances. He’s still extremely young, though, and is half a season into his first time as a full-time point guard. He still needs to develop that part of his game and he certainly has the talent for it.

Share some optimism for the team. What is something you saw this week that gives you hope for the future?

Josh Christopher has been an absolute wonder and a spark off the bench. During the Rockets loss vs the Timberwolves and 76ers, Christopher was able to support a sluggish team and impact them to overcome substantial deficients and make those games at least watchable during his minutes out there. He and KJ Martin were able to show outstanding chemistry as well. It’s exciting to see another one of the team’s four first-round picks show signs of success in the league so soon into their careers.

To continue on the pace discussion, we saw several lob passes on the fast break. Josh Christopher, Jalen Green, KPJ…all of these guys were getting out and running at points and if the Rockets can start putting in the work defensively, they’ll have a lot more opportunities to get out in transition.

Josh Christopher. Just everything about him. The way he studies the game, the tremendous improvement he’s shown in such little time, the hard work he puts in, the aggressiveness, relentlessness, he brings something special to this team and the talent is there, the work ethic is there, and I believe he’ll wildly over-perform his draft position.

Alperen Sengun is back soon! It’s looking like he might return tonight against the Spurs, possibly. Something from this past week, though, has to be the Kevin Porter Jr. game-winner. It was electric to watch and got me hyped up for a slew of games that ended up going poorly.