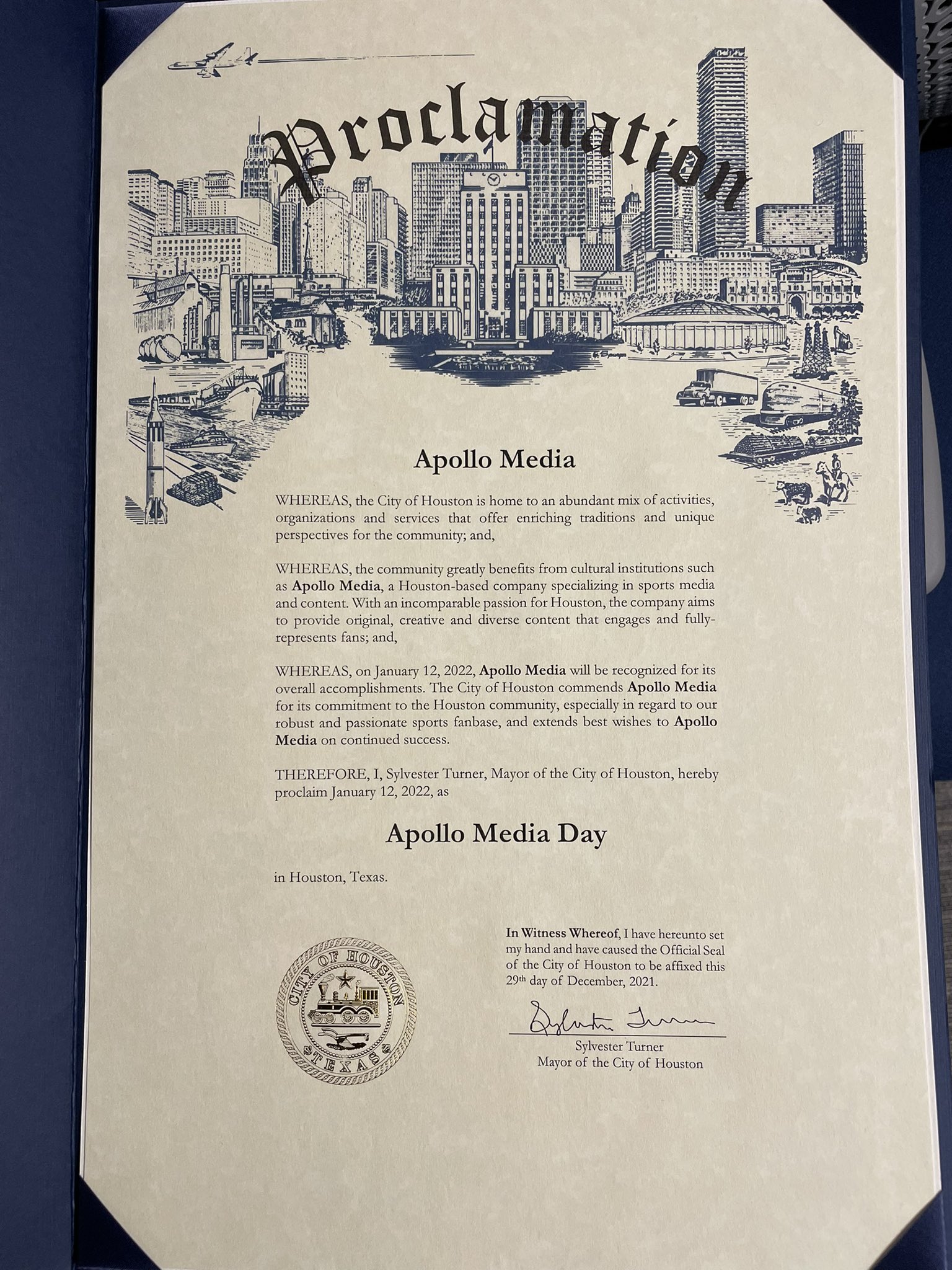 Mark your calendars! January 12th is officially, like officially official, Apollo Media Day in Houston, TX. A high-ranking official from Mayor Sylvester Turner’s office arrived to the Apollo Media HQ in the galleria to award us with a proclamation commending the accomplishments of the squad and putting us in a spotlight shared with many other Houston staples. Apollo Media has been on Mayor Turner’s radar for a while – in fact he wore a couple of our masks to his pressers in June of 2020, only 3-4 months after we decided to make the company official, but the award itself makes it publicly recognized.

How did we get here?

Joshua Hill and a man known simply as Apollo Dez created a company that officially ‘launched’ on February 24th, 2020 that has been captivating the city with great content, merchandise, and providing fans an online community to rally around for Houston sports coverage and more. Just as we opened the doors, so to speak, Rudy Gobert jokingly grabbed a dozen press microphones and within a few weeks all major sports seasons were delayed indefinitely. Great. A budding sports media company with virtually no sports to cover. Our hearts sank in our chests. The Korean Baseball League had us choosing alliances with teams we’d never heard of and staying up all night just to hear a bat crack. Not to worry – a group of creative thinkers set a plan in motion to grow the audience, put down strong roots for the brand, and march forward with the best intentions and highest expectations.

In a world where sports reign supreme there are other ways than live matches to take in the content. In Apollo Dez’s mind video games and Twitch streaming stood out as a way to engage with the audience and enjoy a half-assed version of a baseball season we were all missing out on. So he fired up his PS4, set up his web cam to stream on Twitch and simulated the entire Houston Astros schedule on MLB The Show. Anyone who knows Dez knows he could hold a full-on conversation with a brick wall, so giving him 100 viewers and watch him chit chat his way through the Astros season seemed only natural. The Apollo twitch channel following grew immensely with regulars tuning in every evening to watch a game with Dez, and newcomers jumping in the chat to engage with others. These OG Apollo followers have been loyal since the jump and have helped spread the word, and for that we are super grateful.

A few months down the road sports would return and we’d have something more tangible to bond over, but the Simulated Season was a fantastic concept and only one example of thinking outside of the box that the Apollo team came up with in a time that we called The Pivot.

In January 2020 the MLB Commissioner’s report dropped and Houston sports fandom would never be the same again, at least for the foreseeable future. We had to fight tooth and nail to defend our favorite team, pointing out the irony of twitter users claiming that one team had ruined the sanctity of baseball. A wise man once said “the next baseball game without any cheating will be the first.” The history of rule bending in baseball goes back 100 years and it will never change. Nevertheless Apollo kicked out a simple yet effective design that has been the backbone of the merchandise offerings to date. H-Town Vs Everyone. It really was Astros fans vs 29 other fanbases, all day, every day. We needed something for the unapologetic fans – my favorite kinds of fans – to shove in the faces of the hater and losers, of which there are many. So it was born — and it flourished. We couldn’t keep up with the demand, content pirates were stealing the design to sell for themselves, reputable companies were making knock-offs. This whirlwind was fun, and we had created it.

Then it happened. We got the H-Town Vs Everyone tank top into the hands of some Astros players. Lance McCullers Jr. and Carlos Correa were sporting our gear regularly during pre-game workouts and post-game pressers. We had been validated in the eyes of the city, at least that’s how we felt behind the curtain. The Beyond the Diamond podcast hosted by Apollo Dez and Brian LaLima – ApolloHOU’s Reigning Batting Challenge Champion began to get high profile guests one after the other(if you haven’t heard or watched the Brent Strom episode, below, you’re missing out).

Brian had this to say about Apollo Media being recognized by Mayor Turner.

I would like to thank Mayor Turner and the entire city of Houston for the recognition and support. This just shows that the dedication and work from the men and women of Apollo is paying off and that we are on the cusp of greatness as a team. But with all that being said, we just gettin’ started, baby.

Our 24-hour charity stream, which raised nearly $10,000 to aid Houston residents following the unprecedented freeze, had guests from both the Astros and the Houston Rockets organizations. The content was flowing the and brand was growing.

Jackson Gatlin hit the ground running to grow the Rocket’s side of Apollo Media. He recruited several creators that he felt would be a good fit for the team. People who had already been creating Rockets content were psyched to contribute to the brand and grow along with it. The Rockets squad at Apollo has had too many accomplishments to count in 2021, but suffice it to say, it was a successful year. To name a few:

I asked Taylor what he thought of the Mayor awarding Apollo Media their very own day in Houston. Here’s what he had to say.

To have the city you’ve grown up in your entire life recognize the hard work you’ve been putting in is a dream come true. It’s confirmation that the long hours and late nights are beyond worth it.

The Rockets season is still in full swing and although they aren’t the best product in the NBA to watch there is still a lot to discuss. And with nearly 140 episodes of The Launch Pad Podcast, regularly scheduled Twitch streams, and packed-out Twitter Spaces the proof is in the pudding.

As Apollo Dez always says “Content Never Sleeps.” There is always something to be created. The storyboard is never blank at Apollo HQ. Press credentials with organizations the likes of the Astros, Skeeters, Rockets, Vipers, UFC will have us kicking out more content than you can consume.

Although there are many faces in front of cameras and prominently displayed on Apollo’s coverage, there are several contributors that provide the backbone of the product that makes it to the public. There are video editors, blog authors, idea peoples, broadcasters, podcast hosts, SABR award-winning data analyzers – all operating under a collaborative workspace. The foundation is still being laid but it’s already a very strong one to build upon.

With a vision for the future of their company that is somehow both crystal clear and somewhat blurry, Joshua and Dez sound off on what it means to them to be recognized by Mayor Turner and the City of Houston.

It’s just a testament to our team and all the hard work that’s been put in. 2021 was our first full year in my eyes and to see the leaps and bounds has been special. I want to thank the Mayor and the city for the recognition and this is just the next step as we continue down this path.

And, always a man of action but with few words, grinning ear-to-ear with ideas for the Apollo Media world takeover burning through his skull, Josh summarizes his thoughts on the City’s recognition bluntly.

As for me I can’t wait to see what the future holds. The award from the City affords Apollo Media access to all events held by the City of Houston that we didn’t have before. The content that will spill from these gatherings will no doubt be electric and help to grow the brand outside of the loyal sports fans following which is the first step to the non-hostile takeover of the media world. We’re thinking big, huge, humongous for the future of this company. I’m thankful and fortunate to be strapped into the rocket with the rest of these talented and driven individuals. Let’s go get it.