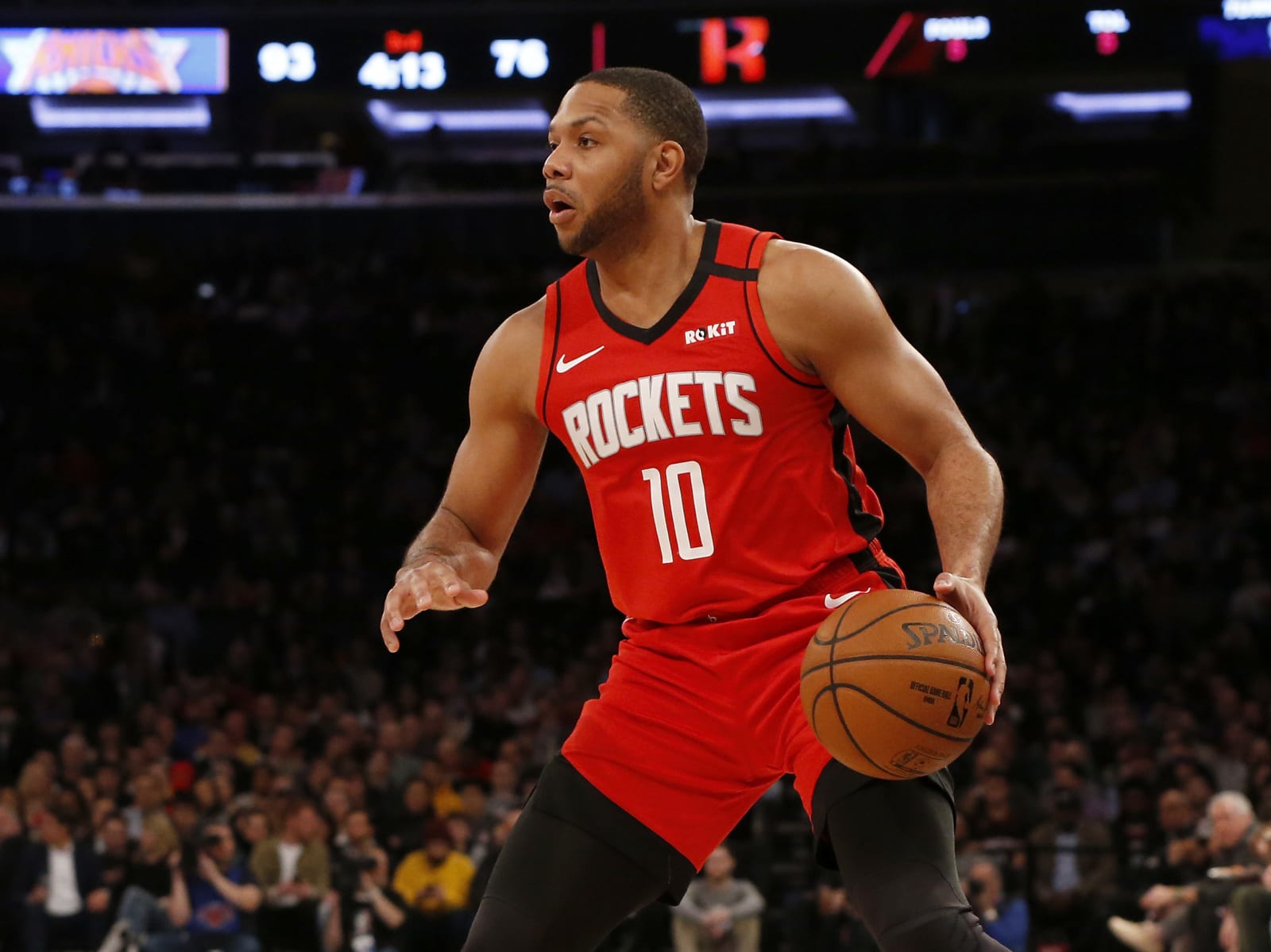 The Houston Rockets made very little noise at the trade deadline, despite having tradable assets in Eric Gordon and Christian Wood. Now, the team is pretty set as-is for the rest of the season.

Rockets fans have many opinions about the decision of the front office to practically stand pat. Let’s bring in some of them to discuss this and more in this week’s roundtable!

How do you feel about the one trade the Rockets made at the deadline, Theis to the Celtics for Dennis Schroder, Enes Freedom (waived), and Bruno Fernando?

I am okay with Theis being traded back to Boston. Although he wasn’t a good fit for the team, Theis was a good influence and I’m happy to see him return to his previous team while getting his salary off the books.

I was fine with it considering Theis had no role with this Rockets team. They signed Theis not knowing that Sengun would be this good this fast and then there was no reason to even have him on the roster at this point.

Bringing over Dennis Schroder and him possibly taking time away from the young guys is not an ideal situation in my opinion. They should be prioritizing Daishen Nix’s development in the second half of the season.

I believe it was an obvious trade in moving Theis. Rockets fans have known for some time that Theis was like trying to fit a square peg in the round hole (mainly evidenced by the disastrous net rating of the infamous double big lineup of him and Wood). With Enes Freedom being immediately waived, it is less clear what value Dennis Schroder and Bruno Fernando will provide to the team. With the Rockets’ glut of guards, odds are significant that at least Schroder is eventually picked up by a contender.

In the end, it was not a significant trade, but the team did clear some roster space, which has some value in itself.

It is certainly nice to get off of the contract of Daniel Theis and get some expiring deals. It would’ve been great to get a second-rounder in addition to these players, but this was just fine.

I will say, though, that I am worried a bit. It seems like Dennis Schroder will actually have a role on this team moving forward, which I just can’t justify. This team needs to move younger, not bring in veteran point guards to take away minutes from the rest of the squad. I bet we see him get bought out at some point.

Did the Rockets make the right decision standing firm on their value for Eric Gordon and Christian Wood, resulting in them not being traded?

The disappointing part of the end of the trade deadline to me was not being able to trade EG. Although since it appears like the players like him around, I’m okay with him staying the rest of the season. Hopefully, the Rockets may be able to trade him in the offseason.

I don’t think the Rockets had a firm offer for a first-round pick. People need to remember that Eric Gordon was only going to a contending team. That makes the possible destinations a very short list so even though there were reports leading up to the deadline, you can’t really depend on 99 percent of them.

When it comes to Christian Wood, as Jake Fischer said on my podcast, the league doesn’t really value C Wood as a priority when it comes to trades. Sure, they don’t mind having him on their team, but they weren’t trading anyone of value for him which led to the Rockets not moving him.

It’s honestly hard to tell. We simply don’t know what kind of deals the Rockets had on the table for both players. With a team as young as Houston, there is significant value in having consummate NBA professionals like Eric Gordon to provide a positive influence. Gordon is as professional as they come, and Silas has iterated many times how much value he brings as an elder statesman. I would have loved to have seen Gordon traded to a contender (I particularly wanted him to reunite with CP3 in Phoenix), but I’ve always been a fan of EG and he’s quietly become one of the most consistent and longest-tenured players in franchise history.

With Wood, fans have been disappointed in his play at times and wished he were traded at the deadline for draft capital and/or young players (a trade with Charlotte for PJ Washington was discussed I believe at some point). However, he is still one of the team’s more consistent players, and it could have been other teams didn’t value him as highly as the Rockets front office did. While next season will be the last year of his contract, if the league does continue to in fact undervalue him, there is a world where the Rockets re-sign him at yet another reasonable rate.

What a disappointing trade deadline for the Rockets, right? It seemed like there was a lot of smoke with Eric Gordon, in particular, being on the move elsewhere but it just didn’t come to fruition. As one of the best shooting guards on the market, it’s hard to see how this happened. The right price for Houston wasn’t there, though, so I can see their reasoning on keeping him around to be a positive influence on the young guys. I would like to see his minutes decrease as the season keeps going, though, for development.

As for Wood, I don’t know if the Rockets will ever get what they want in trading him. The league seems hesitant to trade for him, but maybe his great talent will eventually win out with someone offering a good package to Houston, possibly in the summer.

With James Harden being traded to the 76ers for Ben Simmons + more, how do you feel about the Nets’ draft picks that Houston owns?

I’m cautiously optimistic. The Nets did not receive the same number of picks back compared to when they traded for Harden, so they aren’t completely back to equilibrium there. However, it’s not guaranteed that the Simmons/Kyrie/Durant trio will work. There is a risk that the new picks could be used to rebuild the Nets sooner, but they could easily also be used to facilitate another draft pick. We will need to wait and see

I always felt good about the picks anyway considering Harden and Kevin Durant are nearing the end of their prime and Kyrie Irving could easily leave next year. Now, I am really excited about them because the Nets have Ben Simmons who no one knows how he will be in Brooklyn and Kyrie could still leave next year.

Also, Durant’s injury issues aren’t going away for the rest of his career.

I actually feel good. The Rockets own the Nets’ picks for the next five years (if we are including pick swaps). Five years is an eternity in the NBA – look what happened in just 13 months with Harden! Further, with a team as top-heavy as the 76ers, combined with the instability of having Kyrie Irving on the roster, anything can happen. Star-laden teams are inherently unstable, as we have seen time and time again – Harden/CP3 only lasted two years, and even the Durant-GSW pairing lasted just three.

Harden in my mind is a significantly better player than Simmons, and there are still a fair number of unknowns around whether KD, Simmons, and Kyrie can make it work. I do think Philly ultimately won the deal – the Nets leverage was immediately crippled the minute Harden wanted out (Rockets fans know that story too well). Time will tell.

I’m extremely optimistic about the pick this season, for sure. Kyrie is ineligible for the majority of their remaining games, Kevin Durant is still injured, and Ben Simmons needs time to ramp up. This could lead to Houston having a late lottery pick from the Nets this year, which would be huge. For the future, it all depends on how the fit between those three is. Simmons has been trashed so much to the point where he’s underrated, but with three volatile players like that, these picks could be money for the Rockets soon enough.

In the second half of the season, how many minutes should each of the main Rockets’ young players be getting per game?

Here are my guesses on playing time estimates (going to exclude the “older” guys like Wood/Mathews/Tate): Jalen Green/KPJ: 30-35 minutes, Josh Christopher/KJ Martin: 20-25 minutes, Sengun: 18-25 minutes, Nix: 5-10 minutes. Overall, I think most of the young players should get a majority of minutes.

Jalen Green should continue to get 30 plus minutes, Kevin Porter Jr. the same. This is the backcourt of the present and future no reason they shouldn’t play more minutes than anyone on the team.

Kenyon Martin Jr should start to get more minutes, Alperen Sengun should get to the point where he is playing 25 minutes a game, and Nix should be brought up to the Rockets from the Vipers and get the backup point guard minutes. Schroder and Gordon at some point should be shut down if Schroeder is still on the team and not bought out.

40 minutes a night for Sengun! Seriously, I’d like to see more of Jalen Green operating as a primary ball-handler, as well as more burn for Sengun (like every Rockets fan). Josh Christopher at 16-17 minutes a night is still a little low – I believe the Rockets found a real gem in him and see him as a strong potential future building block for the franchise. I would hope to see him eventually approach low to mid-20s. I think Kenyon Martin, Jr. at 19-20 minutes is good – if he improves his shot, I would love to see him get more minutes – he is the Rockets’ perfect energy guy. Otherwise, I think all the other young players are getting the appropriate playing time.

KPJ and Green should each easily keep getting 30+ minutes a game. Sengun should slowly ramp up toward that number, as well. Christopher needs to be pushing 20+ minutes, too. KJ Martin is such a great contributor to the team, he should probably see a minutes bump. I would love to see Daishen Nix come in and contribute 10-15 minutes a game at some point, he’s been tearing it up in the G League. That probably requires Schroder getting cut and EG getting a minutes reduction. We shall see.