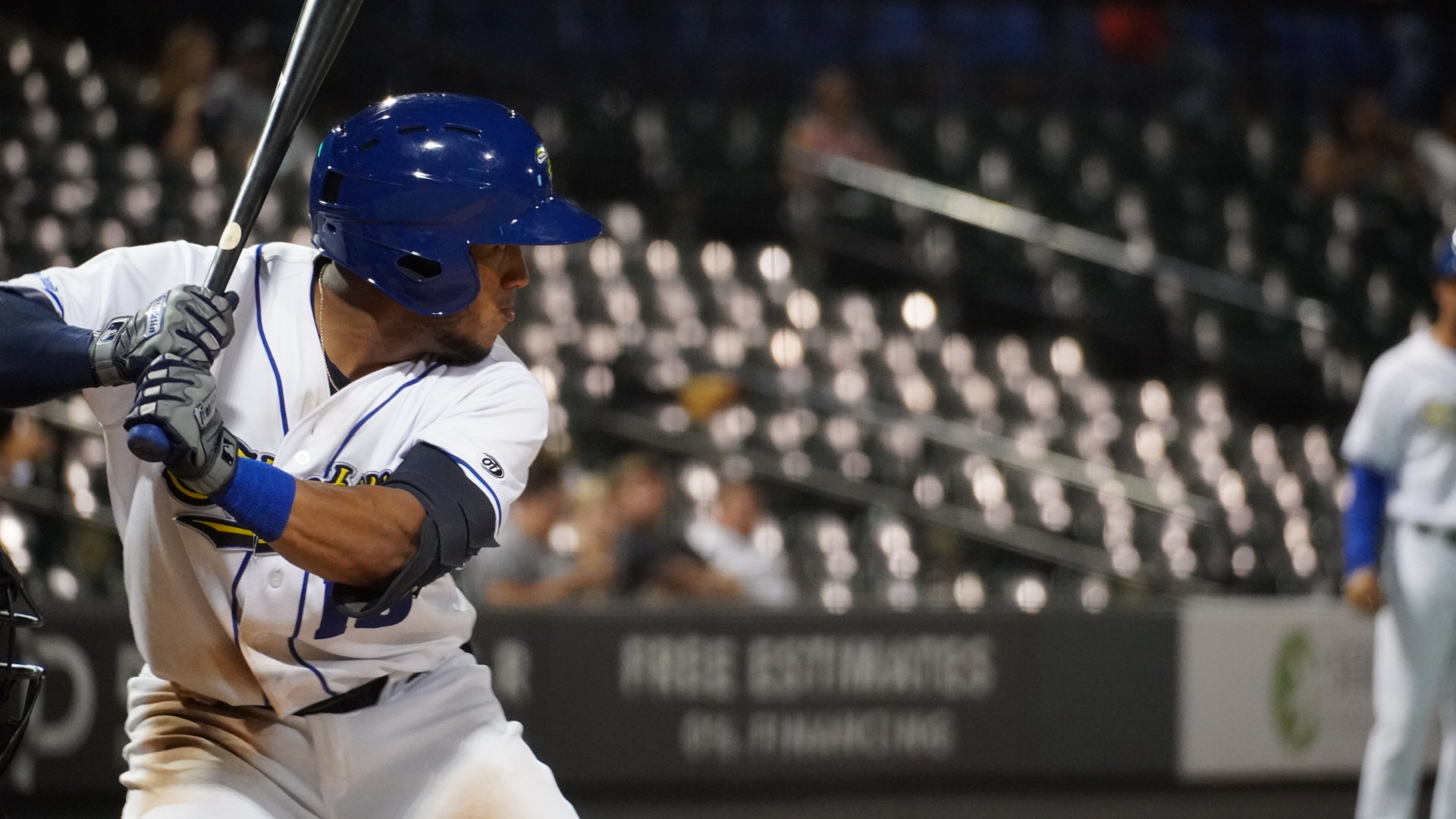 The PCL recently made StatCast data from every park in the division publicly available, if you know where to look. A few Sugar Land players pop in aggregated datasets from the month of April, most notably Shawn Dubin, Hunter Brown, J.P France, David Hensley, and our topic of discussion today, Pedro Leon. I’m hoping to have pieces on all of them soon.

Pedro Leon is off to a fine start in Sugar Land this year. From a bird’s eye view, he sports a .241/.375/.456 slash line, good for an .831 OPS, a 116 wRC+ (minor league wRC+ is not park factored, and Constellation Field is where balls go to die. Adding 15 points to any Sugar Land hitter’s end-of-season wRC+ is an acceptable rough shorthand). Leon has already swiped 8 bases in just 96 PA, only having been caught once. His strikeout percentage looks to be worrisome, ballooning up around 33%, while a 13% walk rate hints at some patience. That’s all fine while a little unimpressive, but his 2022 start is a great example of how unique his profile is, and what Leon could represent at the major league level.

It’s no surprise as to why the Astros came calling, hefty check in tow, for Leon’s services as an international signing. He may be undersized, but he’s an absolute StatCast darling. We know Leon has plus pop, but I think it’s important to contextualize just how much pop, now that I have the requisite data: Pedro Leon’s max EV this season of 113 MPH would put him tied for 28th in MLB at time of writing, along with Nate Lowe and Joey Gallo. Those guys are not 5’10 center fielders with a 20 steal outlook. It would also be tied for Tyler O’Neill’s, perhaps a better comparison, max EV for all of 2021 – you know, the year TON hit 34 home runs.

Leon’s 80th percentile EV is 106.2 MPH (elite), and his average EV of 92.7 MPH is the third best of all PCL hitters with at least 45 batted balls so far on the year. Average EV is far from a perfect stat, but for context, 92.7 MPH would be 15th best in the major leagues this season, sandwiched between Christian Walker and Anthony Rendon. Leon is hitting the ball hard, harder and more frequently than just his slugging percentage would imply.

But, of course, hitting the ball hard is only part of the equation. Where, and how, is that contact being directed? Leon’s raw damage output is impressive: 46.6 HardHit% (Top 10 of PCL qualified hitters) indicates he’s getting barrel to ball often. 37.8 SweetSpot% (7th of qualified PCL hitters, would qualify in the top third of all MLB hitters) encourages the idea that Leon’s above average BABIPs are not flukey despite an extreme flyball approach. That is to say, nearly 40 percent of Leon’s batted balls are in the optimal launch angle for base hits, between 10 and 30 degrees, regardless of the exit velocity. And we already know that the EVs are elite. Leon’s batting average outlook gets pulled down by his propensity to strike out, but he should continue to run BABIPs north of .300 for as long as his bat path leads to above average SweetSpot%. It would be easy to glance at the FanGraphs page and notice his .250 average and 33 K% accompanied by a .357 BABIP, and conclude that Leon has been getting lucky – that he’s actually a .220 hitter. But hitting the ball consistently at optimal launch angles is not luck, and those BABIPs should persist for as long as he continues to do so.

For reference, here’s the full list of MLB hitters within 1 MPH of Leon’s AVG EV, and 2 percent of his Sweet Spot distribution from 2021, in either direction:

Those are some hitters. I don’t mean to make it sound like Leon is guaranteed to be that caliber of hitter in the Majors. Of that list, Teoscar and O’Neill are the only ones that come close to Leon’s strikeout rate. None of them are close to his rather steep average launch angle. Regardless, Leon’s 2022 campaign, up to this point, puts him in fantastic company.

He’s Hitting the Ball In the Air

Leon has always sold out to pull the ball, with a career 57 Pull% stateside. He’s hitting more line drives and flyballs than ever, by a wide margin. The groundball rate has dropped from 47% in 2021, to 23% in 2022. For some players, a pull-happy fly ball approach is unprojectable. For players with real power though, a pulled fly ball is almost always better than pulled on the ground, even factoring in Pedro’s plus wheels.

StatCast leaves lots of room for interpretation of these results. Leon’s average launch angle for the month of April is 23 degrees, which, for context, would be the 7th steepest average launch angle in MLB this season. He’s among some great company there, within 1 degree of Jose Ramirez, Mike Trout, Alex Bregman, Matt Chapman, and Trevor Story. To paint Leon’s flyball tendencies as a net negative is perhaps a little off the mark, given his prodigious power – and either way, the LA will almost certainly regress a little bit (as in, likely end up closer to 20 than 25) because Leon’s flyball rate has ballooned past the standard deviations of what is normal for him. 50 batted ball events is right around where things start to stabilize, but for plate approach evaluation “stabilization” only really means that we can weigh what Leon is doing now slightly more than what he did last year – not that Leon’s entire AA season is no longer representative of him as a player. His AA campaign only saw a 29 FB%, and therefore significantly lower average LA.

Leon also has a relatively low standard deviation of his average launch angle. That is to say, the fly balls are more consistently around the 23 degree mark, relative to other players’ deviations from their respective average. I expect for Leon’s average launch angle to end up in the upper bounds of MLB hitters – Marcus Semien and Robbie Grossman are good examples, with 2021 LA’s of 21.1, and 20.3 respectively. That’s likely the range Pedro ends up in, due to the similarly tight cone of standard deviation on his barrels.

The primary knock on Pedro Leon is his hit tool, stemming from his strikeout rate. A common observation is that Leon’s strikeout rate (30% in 2021, and now 33%) is a product of his swing-and-miss tendencies, which is mostly right. To date, Leon sports a 33 Whiff%, well below league average in terms of making contact on his swings. For some added context, however, he also has a 10.5 SwStr%, which is only slightly below league average. When we’re talking about 95 total plate appearances, it may be more beneficial to weigh the SwStr% more heavily, which takes contact rate and divides it by total pitches seen, as opposed to whiff% which looks at contact rate only on swings. Larger denominators in small samples are usually the way to go, and SwStr% is far more kind to hit tool projection for Leon. The discrepancy seems to indicate that Leon’s patience works to mitigate an above-average likelihood to swing and miss. Players are often still productive with Leon’s type of raw power, defensive ability, baserunning value, and an admittedly lagging hit tool. With marginal improvement, or if his whiff rate stays the same upon taking the leap, Leon’s strikeout rate will not be what prevents him from achieving MLB regular status.

Notable MLB comparisons – formatted for desktop, if on mobile, turn phone to horizontal for proper formatting.

Leon is doing well, and improving in important aspects. The closest comparisons appear to be 2021 Tyler O’Neill (although Leon has a far higher CStr%, and is generally more patient), and 2022 Matt Chapman, who is having a fine start to his season. All of this is to say; there are blueprints for Pedro Leon to be an impact major leaguer as-is, and he has plenty of room to grow into a starting OF spot next season. It’s such an intriguing package of tools, built entirely for today’s MLB.