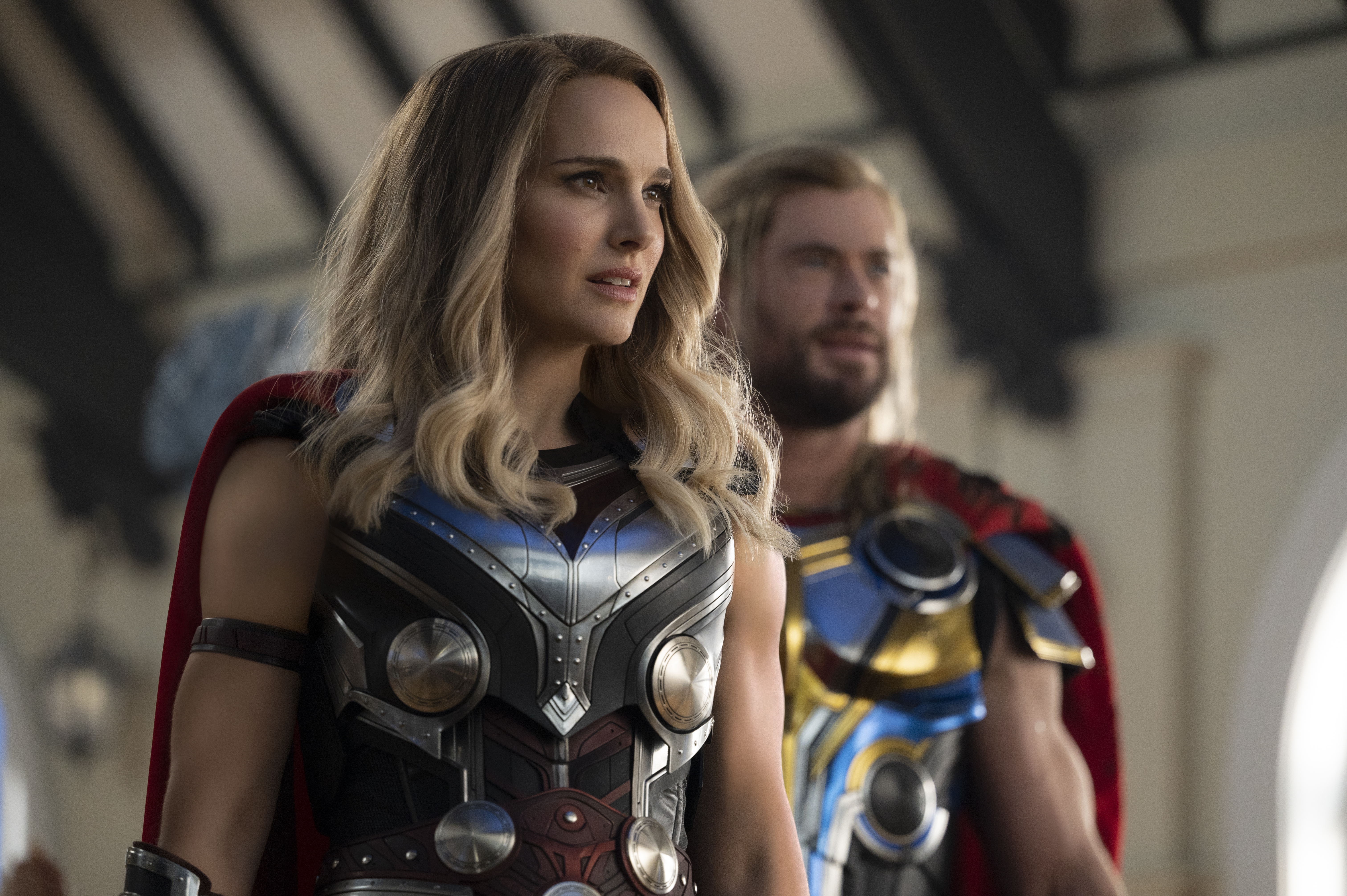 There are NO spoilers for Thor: Love and Thunder in this review.

Marvel Studios’ “Thor: Love and Thunder” finds the God of Thunder (Chris Hemsworth) on a journey unlike anything he’s ever faced – one of self-discovery. But his efforts are interrupted by a galactic killer known as Gorr the God Butcher (Christian Bale), who seeks the extinction of the gods. To combat the threat, Thor enlists the help of King Valkyrie (Tessa Thompson), Korg (Taika Waititi) and ex-girlfriend Jane Foster (Natalie Portman), who – to Thor’s surprise – inexplicably wields his magical hammer, Mjolnir, as the Mighty Thor. Together, they embark upon a harrowing cosmic adventure to uncover the mystery of the God Butcher’s vengeance and stop him before it’s too late.

Should you go see Thor: Love and Thunder?

At the risk of sounding like a shill, I’ve enjoyed almost everything in Phase 4 of the MCU. Moon Knight stunk and I didn’t even attempt to finish What If…?, but outside of those 2 Disney+ shows, I’ve had a great time.

TLDR: Thor: Love and Thunder keeps the good times rolling with fun and inventive action sequences, a terrifying villain, a lot about living and a little bout love. It’s not a perfect film, nor is it for everyone. Your mileage may vary when it comes to the central themes and relationship dynamics. The script doesn’t ever reach the gut-busting heights of Taika Waititi’s instant classic Thor: Ragnarok, and a couple of running gags long overstay their welcome (those goddam goats. UGH.) But there’s enough humor and stunning action set pieces here that Love and Thunder never loses its momentum. And the film finally brings some real heart to two characters we’ve only sort of gotten to know thus far.

Grade: B
Recommendation: See it in a theater, the more people the better.

As is tradition, now that we’ve gotten the main opinion out of the way, it’s time to wax poetic for all my homies who like to read! I’m going to talk about how Thor: Love and Thunder stands on its own two feet in Phase 4 of the MCU.

The Old Gods and the New

Love and Thunder does plenty of cool shit we’ve never seen before in the MCU. But the film feels, in some ways, like a bit of a throwback to a previous MCU era. It’s a largely self-contained story focused on the emotional journey of its lead characters, not on multiversal team building.

Even if the last Marvel project you saw was Avengers: Endgame, then you know everything you need to orient yourself here. Our cast of heroes in Thor 4 is pretty much exactly where we left them. And if you’ve forgotten, then some quick narration/exposition will get you up to speed. The villain, Christian Bale’s creepy-in-the-coolest-way Gorr the God Butcher, isn’t somebody you have to remember from the 14th post credits scene of the 97th episode of a Disney+ show either. Everything you need to know about his origin, goals, and motives is given to you straight away in this film.

If you, like most people, haven’t rewatched Thor 1 and 2 in a while, that’s okay. Love and Thunder will work you back in to the relationship between Thor and Jane pretty quickly.

In my Doctor Strange 2 review I referenced how the effects of the Blip, the Disney+ shows, and the connective storytelling device of the Multiverse all added to my enjoyment of that film and helped set up the next steps of Phase 4. But watching Thor 4, those things are conspicuously absent, and you’d think that would be a let down for me. It may very well be for some. However, I found that the quick, self-contained nature of Thor: Love and Thunder added to my enjoyment just as much as the slow world-building that Multiverse of Madness relied on at the opposite end of the spectrum.

It’s some weird inversion of Newton’s 3rd law (or…something. It’s been a very long time since I’ve had to actually know what words like “inversion” or “Newton’s 3rd law” mean in a technical sense, but I think you can feel where I’m going here.)

Anyway, all that to say, I really appreciated this reminder that the MCU doesn’t need to drop the next Thanos right now or bring in the X-Men and Fantastic Four to tell good stories. They’ve spent more than a decade crafting characters we love, and they can still help us find new appreciation for characters we didn’t care about before without having to give them an 8-episode tv show.

There’s still plenty of juice in there if we’re willing to slow down and give it the squeeze.

You can follow Apollo Media’s brand new official Movies/Pop Culture account @WatchWithApollo. And you can follow the podcast One Take Pod as well @1TakePod. Listen now wherever you get your podcasts. Our latest episode is about Hustle. We will be dropping an episode about Elvis and another about Thor: Love and Thunder very soon as well. Check it out & subscribe.