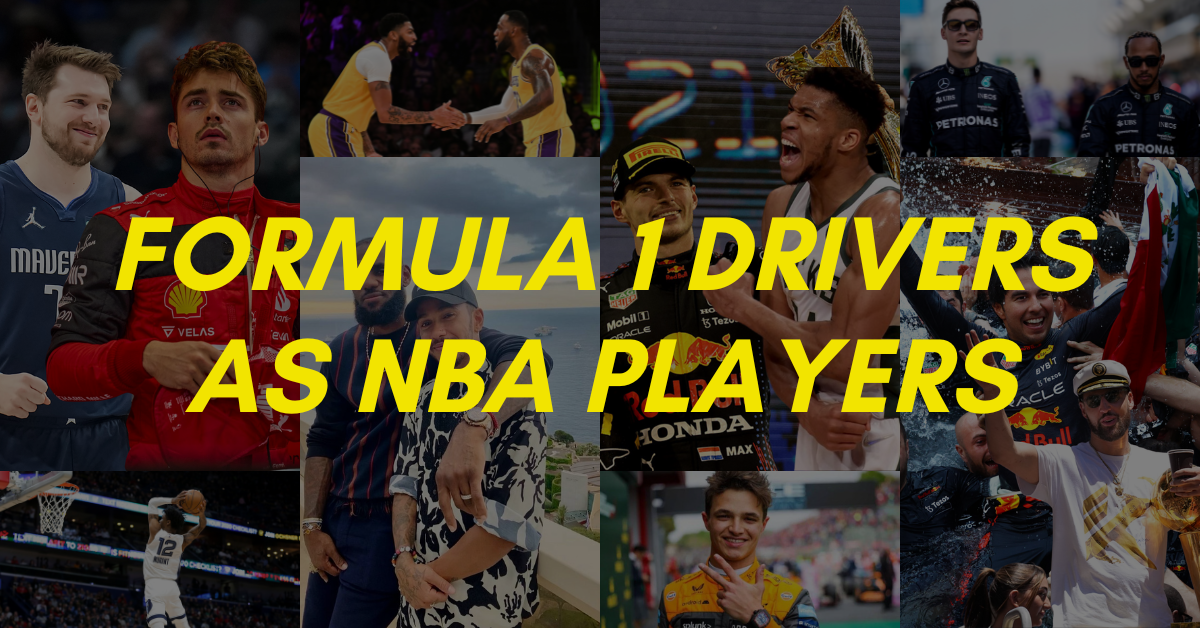 It’s Summer Break in F1 and the Formula 1 drivers get to take a month off. Life as a filthy rich European must be nice. Anyway, the next Formula 1 race isn’t until August 28th. So if you’ve been seeing your Sunday morning TL flooded by Formula 1 fans yelling things like “my GOAT is back on the podium!!!” at unreasonable hours and you’ve been wanting to participate, you’ve got 2 weeks to learn what’s going on and join the fun.

Today’s lesson is an introduction to the top Formula 1 drivers and how to pick a favorite. There are 20 Formula 1 drivers. And it can feel a little overwhelming trying to figure out who is who and who to root for. So I’m going to make it a little easier by comparing the F1 drivers to their NBA equivalents. I’m only going to do the top 8, cause I’m lazy. Also, there’s no reason for noobs to care about the bottom 12. These won’t all be perfect, but it should be a solid introduction. Let’s work!

The Top 8 Formula 1 Drivers (in no order)

This is the easiest one. Sir Lewis Hamilton, the British driver for Mercedes, is considered by many to be the greatest Formula 1 Driver of all time. He is tied for the most Championships ever (7) and has the most race wins ever (103), most podium finishes (188), and various other records. Like LeBron, some people will always have him 2nd place behind a man named Michael (Schumacher, in his case). They’re also the same age and still among the best in their sport well beyond the point that most guys start to slow down. Both are also very publically outspoken about issues of race and are major advocates for their communities, causing controversy and hate amongst certain fans.

Max Verstappen is a young Dutch driver for Red Bull. My personal distaste for these two aside, I feel like this works on a lot of levels. Max and Giannis are both considered young phenoms in their sports, reaching the pinnacle at young ages. Max just won his first Formula 1 championship last year at age 24 (he shouldn’t have, but we’ll talk about that in another article) and has his sights set on another one this year. He’s currently at the top of the standings. Giannis is a 2-time MVP, DPOY and, an NBA Champion at only age 27. They’re also both widely beloved by the super corny “he plays the game the right way!” crowd because they’re not as outspoken or as fun as the GOATs at the top of their sport.

Charles Leclerc is a Monégasque (I’ve learned that’s what you call a person from Monaco through watching Formula 1. Culture!) driver for Ferrari. He’s also only 24 years old and supremely talented with a bright future. He started off the year as the leader for the championship before some questionable management decisions by his team started to cost him big time and have him fairly uncompetitive with the teams actually at the top. Sound familiar? Ferrari and the Dallas Mavericks are basically the same thing, right down to the horse logos. #FreeLeclerc! #FreeLuka

George Russell is another British driver and the 2nd half of team Mercedes. The 24-year-old joined Mercedes this year to help bring the squad some young energy and a building block for their eventual life after Lewis Hamilton. Anthony Davis made a similar leap going from the Pelicans to the Lakers with LeBron, and just like AD in that first Lakers season, Russell has been even better than advertised. Russell currently leads Hamilton in the standings by 12 points and the #BenzBoyz are hoping Russell can keep his current trajectory going instead of becoming 2022 Anthony Davis.

Sergio “Checo” Perez, the only Mexican driver currently in Formula 1, is Max Verstappen’s teammate at Red Bull. Obviously, Klay Thompson and Giannis aren’t on the same team in the NBA, but there’s not really a good Bucks player analogy for Checo so we’re going with Klay. Perez and Thompson are both insanely talented fan favorites and are critically important pieces that help their teams get wins, but they’re not expected to carry the team themselves and are more than happy being a second all-star piece instead of being the primary superstar. Also, they are both Mr. Bitches.

Carlos Sainz is a Spanish driver for Ferrari. He’s 27 years old and has been a popular driver in Formula 1 for several years, but has never been able to quite put it all together until he got his first win earlier this season. DeRozan is similarly talented and enjoyable to watch, and both would have probably been dominant had they played in a previous era. But as it stands now they’re on the outside looking in at the truly elite.

Lando Norris is a 22-year-old British driver for McLaren. He’s only been in F1 for 3 years but has already established himself as one of the most exciting Formula 1 drivers to watch. He hasn’t gotten his first win yet but he’s had a few podium finishes and you can tell he’s got the goods to get that first win soon if McLaren can give him a good enough car to compete. If you want to watch a young driver rise up the ranks to make the rest of the league respect him while being active on social media like Ja Morant, Lando is your guy.

Ways to get to know Formula 1 Drivers

You can also check out the Netflix show Drive to Survive. It’s a bit of a documentary and a bit of a reality show filmed during each F1 season. Check out me and Jon B doing reaction videos for a couple of episodes on the Apollo Media YouTube channel.

Thanks for reading! Hope that helps you pick a Formula 1 driver to root for. Stay tuned to Apollo for more F1 coverage throughout the rest of the season. And check out some of my other articles. I write about pop culture and movies and stuff. It’s fun!