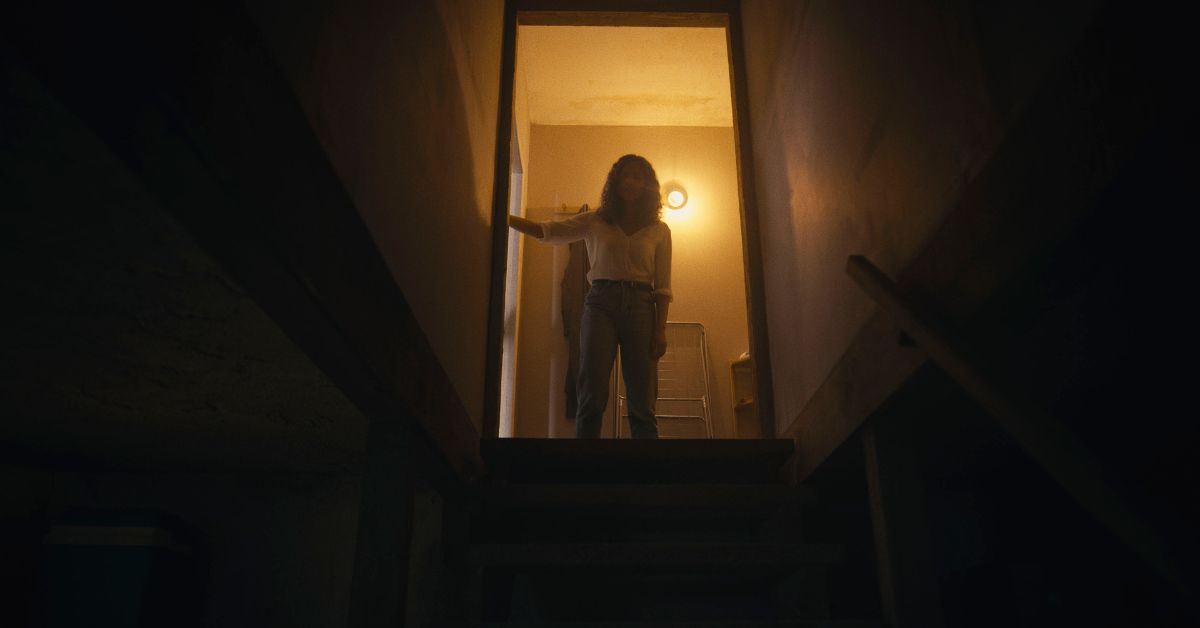 Let me say right off the top, I absolutely loved Barbarian and I would encourage any horror fan or just generally curious moviegoer to check this one out! But a Barbarian movie review is hard to write without giving away too much of the film. Barbarian – the new horror film from 20th Century Studios and director Zach Cregger – has been vaguely marketed but that works to its advantage. The trailer for Barbarian is one of those rare teasers that give you the perfect amount of information to get you interested without revealing ANYTHING about where the movie is ultimately headed.

What is Barbarian about?

Barbarian’s premise is simple enough. A woman named Tess (Georgina Campbell), travels to Detroit for a job interview and books an Airbnb. She arrives late at night to find that the house is double booked and a strange man (Bill Skarsgård) is already staying there. Against her better judgment, Tess decides to spend the night but soon discovers that there’s a lot more to fear than just an unexpected house guest. If you think you know where the story is going after that, no you don’t.

That feeling of surprise and uncertainty is a huge part of what makes Barbarian so enjoyable. So for those of you who only looked up a Barbarian movie review to know whether or not you should go see the movie, yes you should. It’s awesome. It’ll keep you guessing for most of the runtime and all of your guesses will be wrong. It’s not a perfect movie but any nitpicks are extremely forgivable when a movie can surprise, horrify, and, at times, delight like Barbarian does. And it’s a movie that will likely land in my top 5-7 or so at year’s end.

Barbarian has an unconventional story structure that keeps you engaged the entire time. And just when you think you’ve settled in and got a handle on the situation, the movie flips itself on its head, adding more and more layers to the story without ever overcomplicating it. Barbarian doesn’t take itself too seriously either. Director Zach Cregger was a member of the comedy troupe Whitest Kids You Know, and some of that comedy background shines through in Barbarian. The movie has many incredibly tense and frightening moments, but Cregger is able to work in some darkly funny moments as well.

The cinematography, editing, and score in Barbarian are all hauntingly beautiful. You can tell the film is aware of the audience’s expectations when it comes to horror films and the movie uses those traditional tropes to its advantage. Barbarian often crafts a shoulder-tensing, watching-through-your-fingers sense of dread, only to then discard it as quickly as it came to keep the viewer guessing.

The acting is excellent across the board. Leads Georgina Campbell and Bill Skarsgård both give outstanding, committed performances that help draw you in. But Justin Long steals the show. I won’t reveal very much about his character, but Long plays it perfectly and I’d consider this one of the best performances of his career.

Like most horror movies, the characters in Barbarian make some head-scratchingly dumb decisions for the sake of keeping the movie going. So you will have to allow for that. There are also some moments where you’ll have to suspend disbelief and just go with it, but the movie is such a thrilling ride that I don’t think most people will have a problem doing that. Without giving too much away, the ending is a bit abrupt and your mileage may vary with it depending on how you like your horror stories to wrap up. But I didn’t have a problem with it.

I’m usually not a big horror movie person. I don’t typically enjoy recreational fear. But while Barbarian is definitely still scary, the movie is so excellently crafted and takes so many unexpected turns that even I found it all enjoyable. Discussing it with more knowledgeable horror fans than myself, they all did too. I’d say this one is definitely worth checking out for all movie fans, and I’m excited to talk with more and more people about it as it gets seen.

Grade: A-
Recommendation: Absolutely worth seeing it in a theater but not strictly necessary.

For more movie reviews and pop culture coverage, stay tuned to Apollo’s blog and follow us on Twitter @WatchWithApollo. My last review was about Jordan Peele’s NOPE. You can follow me on Twitter @LordDexHinton and you can follow Apollo Media’s movie podcast on Twitter @1TakePod and listen wherever you get your podcasts.