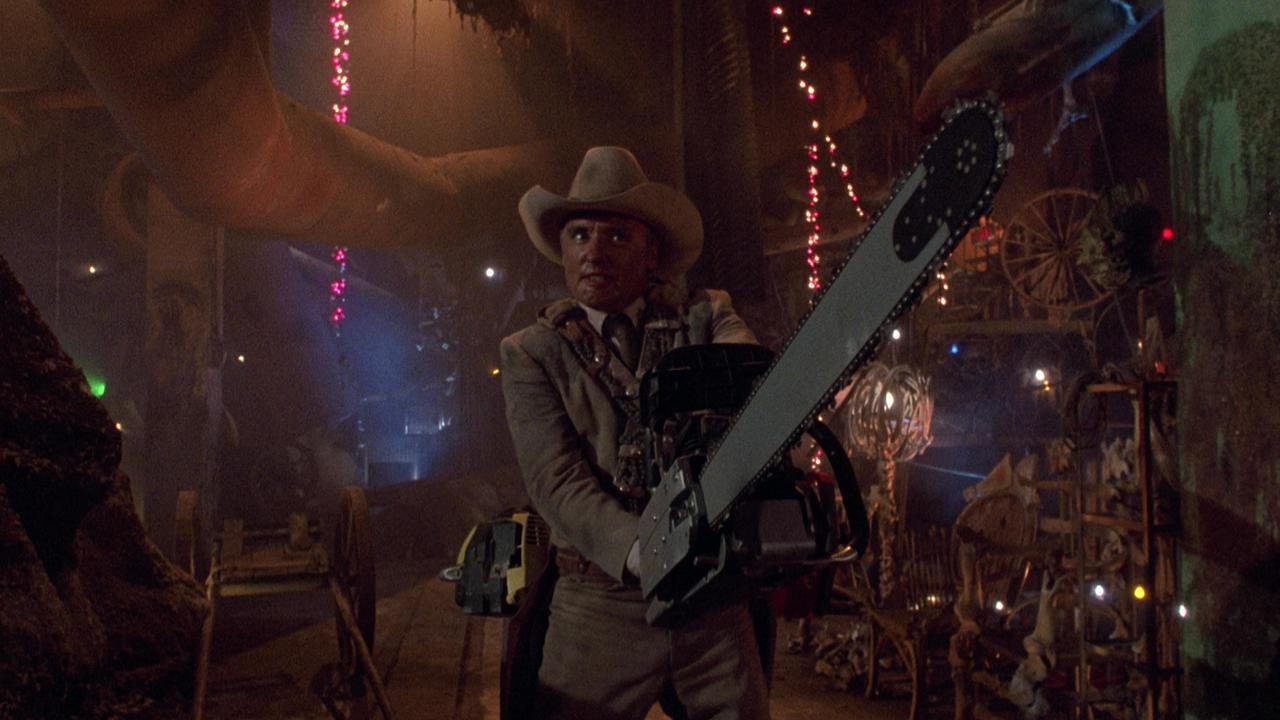 Holy moly, it’s October already. Where did the time drift off to? Anyways, this month is generally known as the perfect month to kick it and watch some spooky motion pictures.

At the time of release, this film was criminally looked over and passed off as a failed horror sequel. Since then, it has been reappraised and given the love that director Tobe Hooper should have seen initially. There are many aspects about TTCMP2 that make it truly one of a kind.

The original “The Texas Chainsaw Massacre” is undeniably a staple in horror and all of cinema. Its brutality and grittiness is conveyed effectively to make every second memorable. At release, it turned the genre on its head and is now hailed as one the scariest films of all time.

Director, Tobe Hooper, began developing a sequel over 10 years later and decided to take a leap of faith in its production. The tone was altered from disturbing and brutal to darkly comedic and shocking. And also brutal still. The result is a masterclass in tonal balance that mixes the atrocities the original showcased and tongue-in-cheek, less-than-serious moments that were popularized in 80s cinema. Insane characters, chainsaw battles, Leatherface falling in love. Chop-Top quite literally eats his own skin with a coat hanger.

This bold filmmaking decision was most likely the reason TTCM2 was panned at release. It is also the reason why it has garnered a respective cult following as of late.

TTCM2 contains some of the most unique visuals and memorable set building in any horror movie ever. Comparing TTCM and TTCM2 will demonstrate the WILD visual transformation that the mostly returning crew worked on. The set designers deserve some of the most praise fore this observation. They went the fuck off, man.

This film almost gives off a fantastical vibe. Something that would make Guillermo Del Toro cream his Khols’ jeans. It’s daunting and larger than life in its creative presentation. All the sets in the film are meticulously crafted and given ample ambiance.

The film’s set in the second half is a character on its own. Full of personality and color. Color is a huge add in this sequel as it bathes everything in neon hues.

The colors and set designs fuck in this motion picture. And you’re in the splash zone, baby. Front and center.

All the characters in TTCM2 are written and acted perfectly with copious amounts of personality. The standout being Bill Moseley as the memorable Chop-Top.

None top Caroline Williams as Vanita “Stretch” Brock. Perhaps the best “Final Girl” in all of horror. She is perfectly ambitious and intelligent while also showing that she is capable. She earns it all by the credits.

That’s all I gotta say.

I implore you to watch TTCM2.

It’s fun, twisted, bloody, darkly comedic, and extremely memorable. This movie is a Red River Rivalry classic and should be watched the night before annually. That’s exactly what I do.

Who knows. It might even be in your Halloween movie rotation after first viewing. Like it is with me. Moral of the story: be like me.