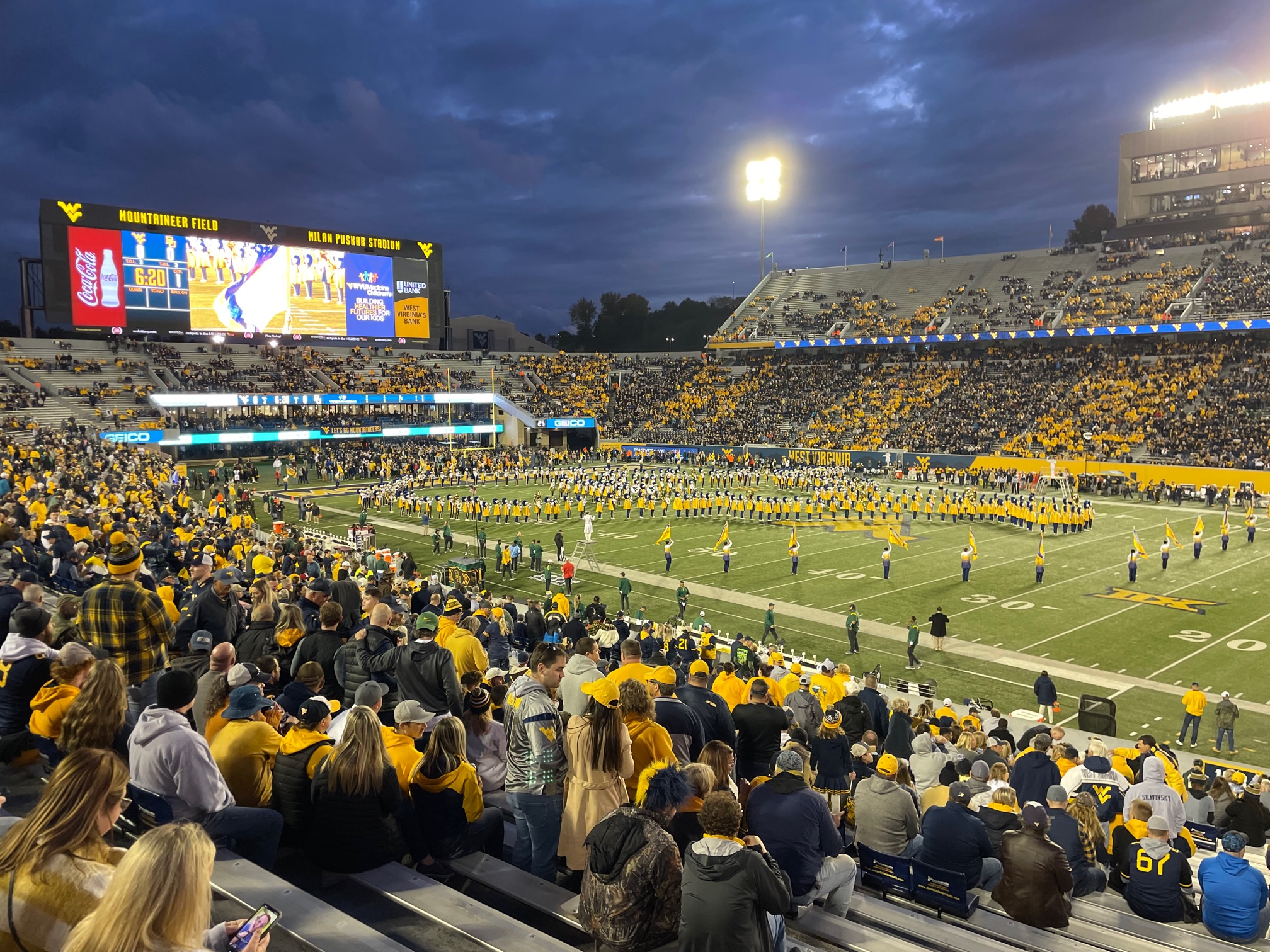 Back in the spring, I ran a poll to determine what game I would attend during Texas A&M’s Bye Week. After whittling the field down from 64 different contests, the citizens of the internet decided to ship me off to Morgantown, West Virginia for the first ever Send Jay Away Classic. Last week, I made my way up to Morgantown for the meeting between Baylor and West Virginia and had the time of my life. I am infinitely grateful to everyone who pitched in to help make this trip happen by helping out with the funds, the recommendations, and the votes and I can’t wait for next year’s edition. A special thanks goes out to Matt of the Smoking Musket for being our Morgantown Gameday guide, to my buddy Brett for giving us a tour of the facilities the day before the game, and to Jonathan Sarver of Hill Country Mortgages for helping out in a massive way for the funds on this trip. Let’s talk gameday.

After waking up on Thursday morning having stayed up a little too late on High Street, we rose to head over to Kegler’s for some wings and a little hair of the dog. I have to say, the wings were fantastic and the perfect thing to help us rally. Following that quick meal, we made our first voyage on the beautiful machine you see above. West Virginia University is divided into two campuses, Evansdale and Downtown. We took the Personal Rapid Transit (PRT) from the Medical Center on the Evansdale campus down to Walnut to make our way to Gibbie’s for some pre-tailgate festivities. After a couple of beers, it was back to the PRT to head back up the Evansdale Campus to begin tailgating.

One of the most surreal things about tailgating at West Virginia is the fact that the lot directly North of the stadium – the famed Blue Lot – is a hospital lot. Due to the fact that this contest was held on Thursday night – the lot didn’t open for tailgating until two hours prior to kickoff. Of course, that didn’t stop the festivities from getting under way well ahead of the 5PM start time. Tents were up and running early in the morning when we woke and by the time we got back up to the Evansdale Campus the party was on. Matt was kind enough to provide us with the moonshine you see above and the folks at Norseman Defense Technologies were kind enough to welcome us to their tailgate that had an impressive spread of food and beverages.

I did make my way over to the Blue Lot just to wander around a bit once people really started packing in and there was no shortage of hospitality from the kind folks of West Virginia. I was stopped multiple times and asked if I needed a drink or a bite, something I really appreciated. Surrounded by masses of fans, hills, and incredible fall foliage of Appalachia, it really was everything I could have hoped for from a tailgate even with it being a Thursday night game. To honor the tailgating experience I did have to commemorate it with a Blue Lot Shoey (unfortunately – not the only one on the night). After that, it was time to head into Milan Puskar Stadium for the game.

Up to this point, I had already decided that this was a fantastic trip and that I’d have to make a return trip to Morgantown. The game did absolutely nothing to dissuade me of that notion. It was an incredible back and forth contest with highs and lows for both teams, defensive touchdowns, and massive momentum swings. Though Milan Puskar Stadium wasn’t completely at capacity due to the circumstances – the place was absolutely rocking for this Thursday Night Contest. A late fourth quarter field goal from Casey Legg propelled the Mountaineers to victory and I couldn’t help but revel in the victory with the loyal fans that came out to the game in Morgantown. Singing “Country Roads” at the top of my lungs along with the thousands of WVU fans in Milan Puskar was an out of body experience and a tradition that I was incredibly lucky to have taken part in. And if you don’t believe me, just look at the joy in my face below belting it out.

After the game, it was back to High Street to celebrate the Mountaineers win. I don’t have too much of a recollection of what went on but I can assure you that no couches were harmed over the course of our late night shenanigans. I can’t encourage folks enough to go experience Morgantown for themselves. It was a truly incredible trip that will stick with me for the rest of my life. From the bottom of my heart, thank you West Virginia for taking this Aggie in for a gameday and giving him one hell of a story. I’ll love y’all forever.