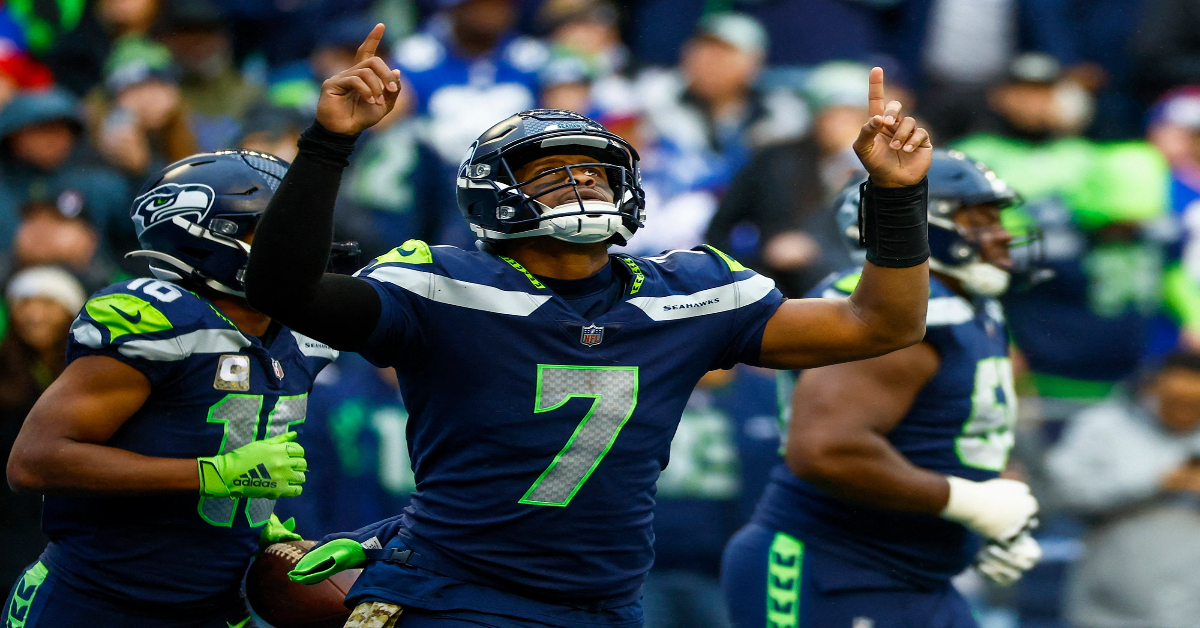 At the halfway point in this NFL season the one thing that has become clear is that nothing about this season is clear. Teams are up and down, consistently inconsistent, untrustworthy and unpredictable from week to week. Week 8 was exciting and somewhat high scoring for a change. Here are my takes.

1. The addition by subtraction in Seattle is getting out of control and it’s great

No team in the NFL is having more fun this season than the… Seattle Seahawks? Entering the season talk around the Seahawks was centered around a rebuilding roster with a potentially disastrous defense, a bottom-five offensive line, and a depressing QB competition between Geno Smith and Drew Lock. Fast forward to November and the vibes in Seattle are immaculate. Seattle sits atop the NFC West at 5-3 after a 27-13 drubbing of the red-hot New York Giants. The Seahawks being in this position feels insane. Nobody outside of the pacific northwest had this coming into the season. The most incredible part is that it appears this isn’t a fluke. Every part of this team passes the eye-test and the numbers reflect those of a first place team.

The Seahawks are one of three teams (Bills and Cowboys) to rank top 12 in DVOA on offense, defense, and special teams. Geno Smith is fourth in EPA+CPOE among all quarterbacks, that’s nerd for “this man is ballin'”.

And then there is the Russell Wilson aspect of this Seattle run. Nobody in the NFL is passing on the opportunity to take shots at the former Seahawk.

Forget the media members and the retired players that are roasting Russ by the hour, the man is now catching strays from active kickers and his former number one wide receiver. Tyler Lockett’s career was built on the back of an incredible on-field connection with Russell Wilson. Children in the Lockett family will be blessed with financial freedom for DECADES due to a bevy of Wilson-to-Lockett moonshots, yet after a fantastic team win over the Giants, the first thing Lockett does is sprint to the mic to fire a shot at the high knees king.

It’s the roast of Michael Scott BUT IN REAL LIFE.

This is one of the very best stories in the league. Keep the wins coming in Seattle, let the Russ jokes continue to rain from the sky as Pete Carroll happily dances on the sidelines like a man freed of a horrific marriage. I’m here for it all.

2. Kyle Shanahan will stop at nothing to beat and dunk on the Rams

The more things seem to change in the NFC West, the more they stay the same. San Francisco beat the Rams for seventh straight time in the regular season on Sunday. The Rams did beat the 49ers in the NFC Championship game last year and that should not be forgotten. But Kyle Shanahan’s dominance of the Sean McVay Rams is consistent and real. The X’s and O’s as to why the 49ers own the Rams have been clear for a while now. The physicality that the 49ers play with on both of the lines gives the Rams fits — especially this season with the current state of the LA O-line. That aspect of this rivalry has become uninteresting and predictable.

Something that has not gotten old is Shanahan’s relentless commitment to the, “I own the Rams,” bit. When star running back Christian McCaffrey became available for trade, the final bidding war reportedly came down to two teams, the Rams and the 49ers. One of these teams was in desperate need for a dynamic running back that can make plays all over the field, the other team now has Christian McCaffrey. McCaffrey on the 49ers is cool, it’s way more fun and will be incredible to watch. It’s also likely a suboptimal decision for a team that notoriously turns random running backs into productive players to trade a second, third, fourth, and a fifth-round pick for an expensive RB.

He saw an opportunity to make his team better while also sticking it to the Rams who actually needed McCaffrey in a really bad way. On Sunday it was hilariously predictable that Shanahan would put CMC in a position to have a day against the Rams in the Rams’ stadium that was flooded with red and gold. Sure enough the 49ers beat the Rams 31-14 and McCaffrey became the first player since LaDainian Tomlinson to run, throw, and catch a touchdown in the same game.

Shanahan took a blade to McVay with this trade and twisted that blade all around on Sunday. And he did it all with a smile on his face.

The value of a star wide receiver has never been higher in the NFL. As good as Josh Allen is, that offense is not what it is today without the trade for Stefon Diggs. The Bengals lost Ja’Marr Chase to an injury and immediately got routed by the Browns on Monday night. Keenan Allen went down for the Chargers in week one and that offense still is yet to recover.

Ask fans of the Eagles and Dolphins what a star wideout can do for a franchise and a young QB. Just a year ago Tua and Jalen Hurts looked like two of the most limited passers in the NFL. While both of those guys certainly deserve credit themselves, the additions of Tyreek Hill and A.J. Brown have changed everything.

We need to start calling him Tyreek “bunk beds” Hill, because everytime that Tua drops back to pass THERE IS SO MUCH ROOM FOR ACTIVITIES. I imagine Tua’s excitement when he found out about the trade is similar to that of Brennan, in Stepbrothers, when he realized just how many activities could be had with the new-found space.

In Philly, A.J. Brown has unlocked the middle of the field and has provided Jalen Hurts with a truly dominant deep threat. Brown found the endzone three times in the Eagles’ win over the Steelers on Sunday and has completely changed the ceiling for this offense and the team.

It’s always exciting to see star players change teams in the NFL, but it doesn’t always guarantee success. Just ask Davante Adams and the Raiders. So when Hill goes off for 188 yards or when Brown hangs 3 touchdowns on Pittsburgh, it’s worth acknowledgement and praise.

4. Division and Wild Card predictions at the halfway mark

Kenneth Walker III looks like a fantasy football staple for years to come, especially with Pete Carroll as his coach.

All it took was a Baker Mayfield benching, a CMC trade, and a Robbie Anderson tantrum, AND D.J. MOORE IS BACK BABY!

Welcome to the endzone, Alvin Kamara. Andy Dalton has been targeting Kamara like Brees used to and Mark Ingram is hurt. Prime Kamara is back.

Playing against the Lions remains to be a cheat code in fantasy football. Aaron Jones 40-burger incoming.

Only one game, but Sam Ehlinger looked good enough to keep Michael Pittman Jr. in your lineup.

It doesn’t feel like Cooper Kupp’s body is going to be able to hold up with this kind of usage in back-to-back years unfortunately.

Tony Pollard was as expected in Zeke’s absence. If Pollard ever learns to block or Jerry ever comes to his senses, Pollard will be the fantasy star that we all know he is.

I did not think this Raiders’ offense had a floor of ZERO but here we are. Nothing for managers of Josh Jacobs and Davante Adams to do other than cross your fingers and hope it doesn’t happen again.

No hot takes as of this moment. This clearly looks like the matchup right now, although I am really starting to warm up to the idea that the 49ers or Cowboys could be in the Super Bowl.

The NFL took a big gamble in Week 9 as far as scheduling and unfortunately for us fans, it did not pay off. In an attempt to clear the slate for the afternoon game between the Rams and Bucs, the NFL loaded the schedule with eight early games and just two late games. As a result, we are stuck with what should be an ugly game between the broken Rams and sad Tom Brady.

The 5-2 Titans vs. the 5-2 Chiefs will be a good time on Sunday night, I don’t suspect that we will have a World Series game seven, but if we do, Sunday night will be a REAL good time.