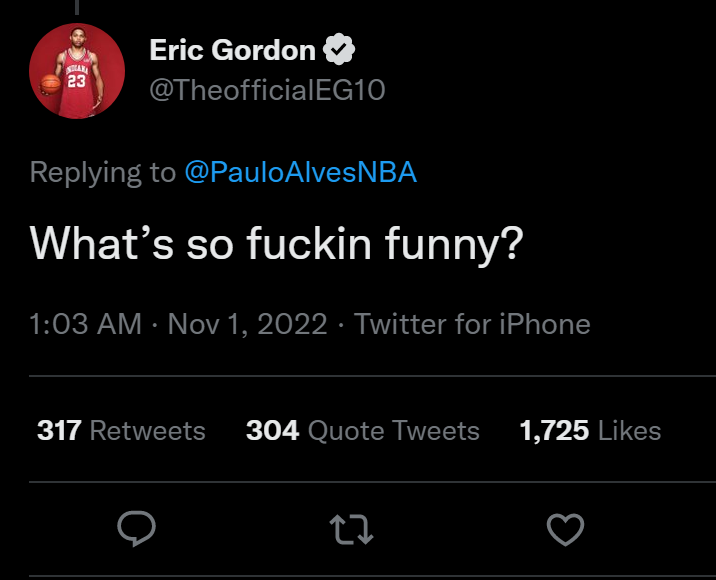 The Rockets were up 93-90 with under a minute left until Paul George decided to become Superman.

George hit a game tying three and the eventual go-ahead fadeaway to put the Clippers up for good. The energy and effort was there in this game but we ultimately fell short in the final minute.

These final possessions will boggle my mind until the next time the Rockets take the court.

Coach Silas, in the final minute, decided to go to Eric Gordon on consecutive possessions. Meanwhile our engine that helped facilitate, Alperen Şengün, sat on the bench with a towel in hand. The latter decision blows my mind as Şengün was a huge part of why we were successful and competitive throughout this game. The former part still has me FUMING! The fact that Silas went with EG as the main option will blow my mind.

He turned the ball over on the first possession by Paul George playing great defense. The second possession was fed off an inbound play that got EG a lane to the bucket but he ultimately missed.

Why not call Jalen or KPJ?!

Give them the opportunities to close games out on the road as the main option. Granted, they’re much quicker and have that “first step burst” but unfortunately that’s not what was written. I simply DO NOT understand this decision making whatsoever.

Despite this disappointment, there is still something positive to come out of this game — Alperen Şengün may have had his best game of the season. He played with incredible effort and hustle in this second half, slicing and dicing the defense with pinpoint passes and hitting “mini Şengün” shakes on Zubac.

He finished with 14 points, 9 rebounds, and 3 assists but his impact was much greater than the numbers suggest.

Let’s not forget to mention the man off the bench, KJ Martin, having his best game of the season thus far.

His impact was felt in terms of timely cuts to the rim that led to quite a few highlight dunks. Pair that with stellar blocks on the defensive end, with multiple possessions where he was able to get his hands on loose balls. It was definitely rewarding to see KJ break out for a great game.

Let’s also not fail to mention Jalen Green hitting a few shots in the fourth quarter, none bigger than his circus-like finger roll finish over Zubac. Despite his lackluster line, the fourth quarter burst shows Jalen may be on the mend to getting back to his electric scoring outbursts!

To cap it off here, even though we lost, this game was still good in terms of everyone finding their rhythm. Outside of the last couple of bungled possessions, the overall game was good in terms of our fight and grit and this may have been the best team defense we’ve seen so far.

As our resident Summit Commish, Kenny, would say, “Let’s chalk this up as a productive L”. In the bigger picture, it certainly was as we’re just one loss closer to a chance at Victor Wembanyama.

For more Rockets coverage, be sure to check out our Apollo NBA blog and follow us on Twitter, as well as our Summit State of Mind podcast!