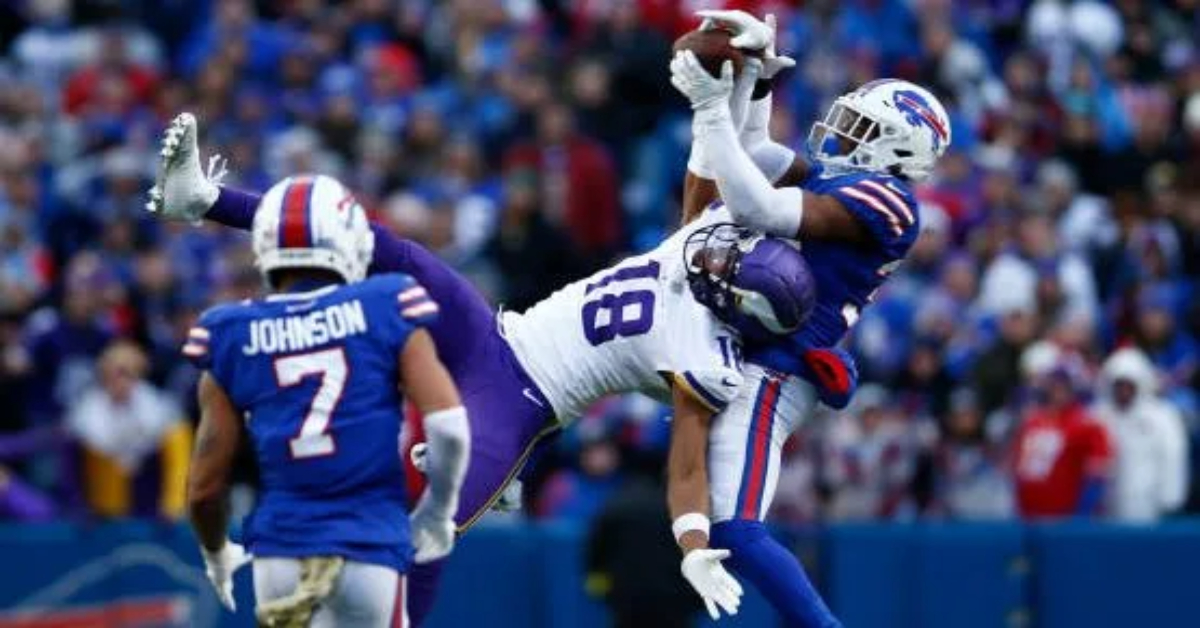 The playoff races are tight this year. Just as everyone predicted, the AFC and NFC East would have seven playoff teams if the season ended today. The last undefeated team took a loss and the game of the year took place in Buffalo. Just another week in the NFL. Here are my thoughts.

1. The Vikings keep getting it done

Nobody was taking the Vikings seriously as their plane took off for Buffalo. The Vikings’ defense ranked below average, the special teams worse than that. They had faced a slew of backup quarterbacks and Kirk Cousins was having another average Kirk Cousins-esque season. All of the criticisms were warranted, fair, and still very relevant going forward. But after an impressive comeback win against a top-tier team, the Vikings deserve respect and consideration amongst NFC contenders.

Justin Jefferson put the offense on his back Sunday. The stud wide receiver from LSU hauled in 10 of his 16 targets for 193 yards and a TD. Jefferson’s 193 yards were well over half of the team’s receiving yards on Sunday. Late in the game every play for Minnesota felt like the, “Justin Jefferson get open and make a play or we are toast,” play, and Jefferson made the play seemingly every time, he wouldn’t let his team succumb to toast. Of course, this save-the-day team-on-my-back game from Jefferson all culminated in one of the single most impressive catches of all-time on 4th and 18 with the game on the line.

It’s one thing to make this play up seven points in the first quarter, but to elevate through the sea of blue defenders and snatch the ball straight out of the clouds and maintain control… on 4th and 18, game on the line, in Buffalo…. come on now.

Jefferson is a special player and in a conference that feels relatively wide open, simply having Jefferson and being able to call the, “forget it, Justin down there somewhere,” play, is a big deal.

It took some silly and horribly-timed Josh Allen turnovers for the Vikings to get out of town with the 33-30 OT win. The Vikings’ defense — 20th in DVOA — is shaky, but also that unit feels like it somehow makes a play when a play has to be made.

The eyes and the brain make the Vikings feel like a fluke. A fraudulent 8-1 team with a meh defense and an even meh-er QB. But take a step back and look at the conference. The Cowboys and Eagles are suddenly very susceptible to the run, Kirk isn’t that much worse than Dak, Jalen, and Jimmy.

Justin Jefferson and the Vikings are in the mix.

The Raiders were on a heater last year. Not the type of heater that has someone at the craps table for three hours. Not the type of heater that has you drenched in sweat after a 10-minute stroll down the strip. The type of heater that saw the Raiders run hotter than the sun in one-score games last year, and subsequently fool the front office into thinking this roster was anywhere near contention. A win now trade for Davante Adams, a big signing of Chandler Jones, and the hiring of Josh McDaniels all after a playoff appearance looked cool in August. But after a 2-7 start to the season — with the latest loss coming at home to Jeff Saturday and the Colts — it’s more clear than ever that luck — as it often does in Vegas — has run out.

The offensive line is bad.

Turns out Derek Carr might not be as underrated as people make him out to be. He’s a slightly above average NFL QB, it’s ok to admit that.

The secondary is in-fact as horrible as it looked on paper.

And Josh McDaniels is what his 13-24 head coaching record says he is.

One of the toughest things to do in the NFL is to admit that it’s time for a rebuild. This is how the Panthers ended up with a QB room of Baker Mayfield, Sam Darnold, PJ Walker, and Matt Corral. The Saints and Mickey Loomis are famous for a refusal to reboot and look where that has gotten them. The Raiders are the latest franchise that has refused to take the L when it should have.

There are no more unbeaten teams in the NFL this year. Taylor Heinicke, Ron Rivera, and the Washington Commanders went into Philadelphia and gave the Eagles their first loss of the year, 32-21 on Monday night.

No QB in the league gives off more of a “we’re playing with house money” vibe than Taylor Heinicke and I mean that in a good way. When Carson Wentz is in the shotgun you can’t help but feel hopeless and doomed, but when Taylor Heinicke takes the rock for Washington, things just always seem to be better. The team responds well to the underdog energy that Heinicke provides and that was evident on Monday night.

In this specific game however, Heinicke was not the story. Washington won this game by running the hell out of the football and controlling the clock in a dominant fashion. The Commanders ran the ball for 152 yards, which allowed them to be on offense for over 40 minutes in this game. Jalen Hurts rarely had the ball and whenever Philadelphia seemed to get something going in the second half, a missed call or a turnover derailed the drive. It’s supposed to be the Eagles that run at will and control the clock, that’s largely how they got to 8-0. With defensive lineman Jordan Davis out, the Birds’ run defense has been lacking and is suddenly a real weakness. Hurts is very much a rhythm passer and player. Make him and that offense sit on the sideline for prolonged stretches and things don’t look the same.

Obviously, at 8-1 there should be no panicking in Philly. The Eagles are still the most well-rounded team in the conference. The run defense and time of possession will be important to monitor going forward, as the Eagles are still very much a team that is best suited to play with a lead.

4. Putting a fork in the Rams is OK

You can’t win them all. In 2021, the Rams went all the way in to win the Super Bowl and did just that. It was common knowledge that there would be a price to be paid later on down the road for this team building strategy, and while many people, myself included, didn’t think the Rams would have to pay this debt so soon, here we are.

The lack of depth for the Rams is finally being exposed. A few key lineman become unavailable and the offense is handicapped. A famously banged-up QB is forced to miss a game and the team suffers a loss. There was way too much dip on the Cooper Kupp chip, an injury was bound to happen with how much he was being asked to do. When you build a “stars and scrubs” style of team this type of season is well within the range of outcomes. Last season the Rams had some of the best injury luck the league, this year not so much. This is far from an indictment of the Rams or how the team was built. They went all in to win the Super Bowl and they got it done. Fans of the Rams shouldn’t be mad about this year. Every franchise and fan base would sign up for a Super Bowl win even it meant the next season would be rough.

It’s nearly impossible to go back-to-back in the NFL. It’s not happening for the Rams this season and that’s fine. Throw on the 2021 tape and get ready for 2023, there’s nothing wrong with that.

Jared Goff looks to Amon-Ra St. Brown as his first, second, and third read. ARSB has a great upcoming schedule, I’d pay a pretty decent price to acquire him.

The Rachaad White movement is happening in Tampa, sell Lenny and pick up White if he’s available.

The Isiah Pacheco movement has happened in KC. Pacheco fumbled early and a healthy Clyde still did not see a single touch.

Sooo Christian Watson scored 4 touchdowns… nobody on this Green Bay offense will be reliable, but Watson is worth an add for sure.

If Matt Ryan is going to be the starter again, Michael Pittman Jr is back in the mix as a low-end WR 2.

This has been such a frustrating Alvin Kamara season. The Saints are a complete coin flip on offense every week.

It appears that Kyle Shanahan is going to rotate Christian McCaffrey and Elijah Mitchell evenly in an effort to keep them both fresh… not the greatest outcome for CMC owners.

Mahomes is throwing for 300 and 3 in his sleep right now. This turned out to be a great year to draft an early QB except for *insert the world’s biggest sigh* Justin Herbert.

Buffalo and Philly are on thin ice as far as my SB pick, but I’ll hold firm for now.

Certainly starting to feel like a Mahomes year. This isn’t the first one of these and it won’t be the last. Tyreek won’t really be considered, but he deserves MVP recognition for how he has changed that Miami team.

We have an outstanding slate in Week 11! Titans at Packers on Thursday night is suddenly a lot more fun after Green Bay took down Dallas this past week. Justin Fields gets to run all over the Falcons, an angry Josh Allen will be out for blood against a horrible Browns’ defense, and we get a great afternoon game between the Cowboys and Vikings. All of that leading up to a Sunday night beauty between Patrick Mahomes and Justin Herbert. Hopefully the Chargers can get a few guys back from injury to catch the football and make this game as exciting as it should be.