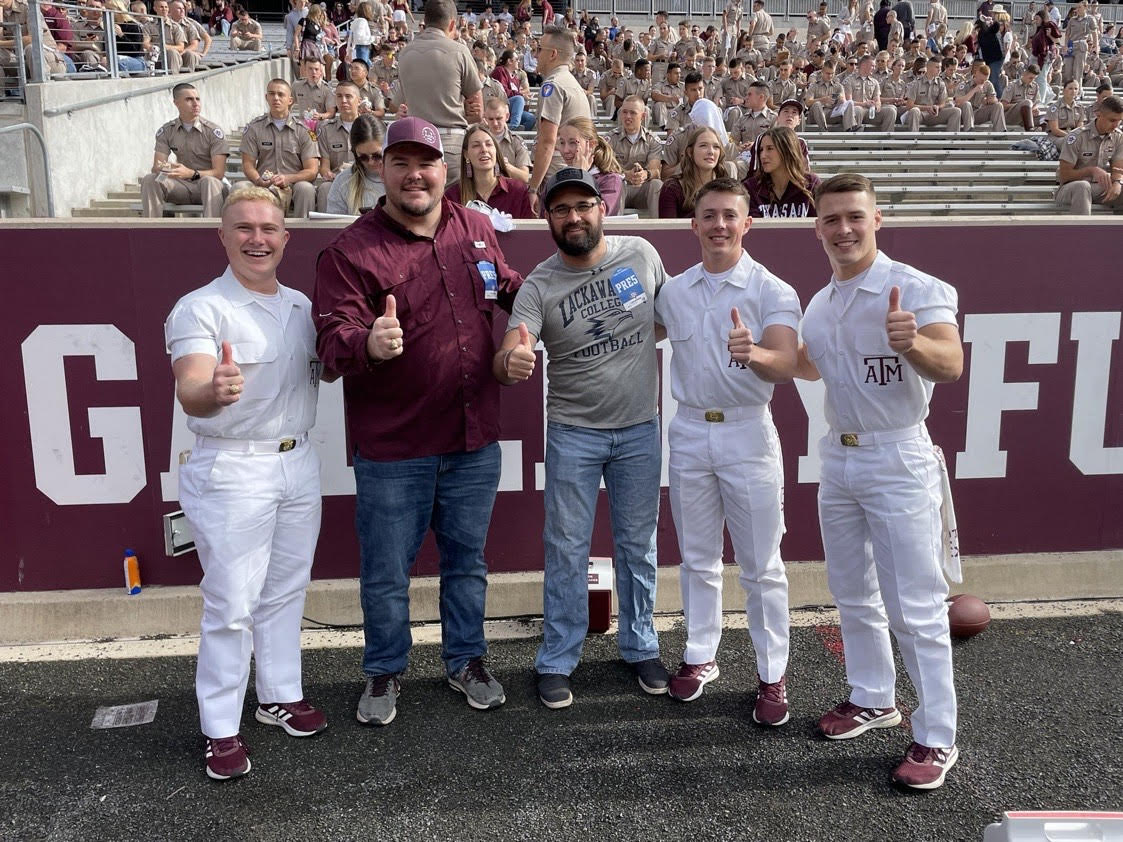 It’s no secret that College Station, Texas is one of the best College Football destinations. I was lucky enough not just to visit Aggieland, but I had Texas A&M alumni (and podcast co-host), Jay Arnold, as my guide.

Full disclosure, I am a huge Penn State fan, and have been to a countless amount of games in Beaver Stadium. I’ve also traveled to some of the best gameday atmospheres in the country with Notre Dame , Michigan, Tennessee, and Clemson to name a few. To say I was excited to knock Texas A&M off my bucket list, is an understatement.

If you plan on flying to College Station, you will most likely be flying into Houston. Before going north on US Highway 290  you should get something to eat after your flight. I recommend some Texas BBQ at Feges BBQ. Below is a smorgasbord of the best Texas has to offer. Ribs, brisket, sausage, “whole hog” with a side of hog fat cornbread, Moroccan-spiced carrots, and loaded mashed potatoes. The brisket and ribs were the best I’ve ever had, the cornbread was something else. When I ate this cornbread, it was like I had never eaten cornbread before and it may have ruined all the cornbread I will eat in the future.

As you are traveling to College Station, you want to pull over at Buc-ee’s. If you are not familiar, Buc-ees is the Taj Mahal of Gas Stations. Think of your typical gas station that serves hot food, enlarge it by 10 and then add two Cracker Barrel gift shops. It’s truly a magical place.

Once we made it to College Station, we headed to “Northgate”. I can only describe this as three full blocks of wall-to-wall bars. Fortunately, Jay was able to be my guide as we went from spot to spot. The bar with the most character was definitely “The Dixie Chicken”. As soon as you walk in you can see why this is the most popular bar in College Station. It has an old honky tonk feel, lots of pool tables, outdoor seating, a live rattlesnake and is packed with history and stories.

Gameday! As we were trying to fight a massive hangover, Jay and I arrived at Aggie Park at approximately 6:45amCT. 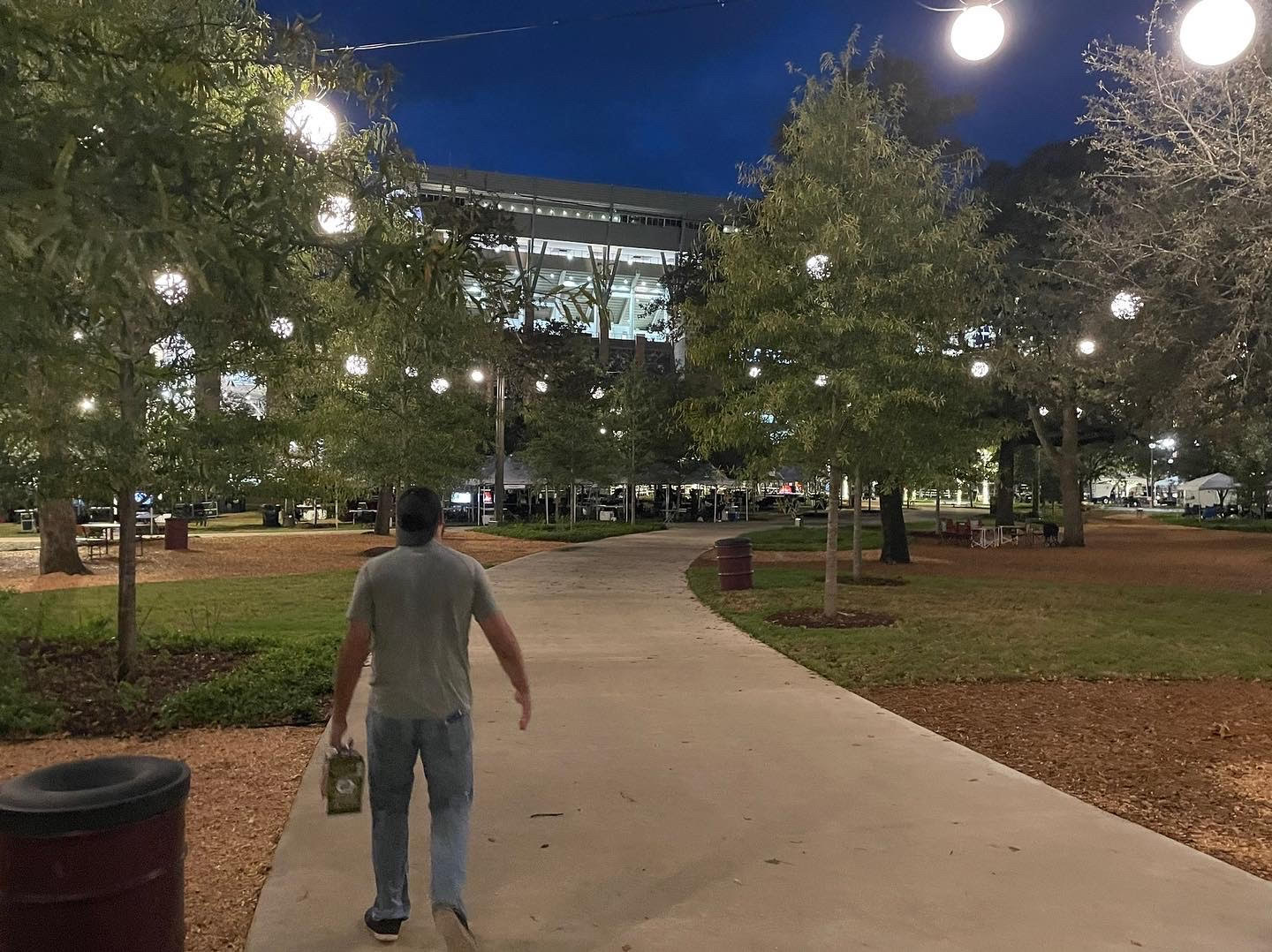 Luckily we found a nice table to enjoy some breakfast as we wait for the tents to set up in Aggie Park.

Now usually I am a fan of your typical tailgate food, but since we were in Texas A&M, I decided to try some breakfast tacos from Taqueria Puro Potosino. If you ever come across this food truck, get the chorizo breakfast taco. It was the perfect “pick me up” for the morning.

Before entering the stadium Jay showed me around to different sites such as the Memorial Student Center, which can be great for shopping, but also a somber atmosphere. Sections of the student center are dedicated to Aggies who have served and lost their lives in foreign conflicts.

Due to Jay’s status as a “high end” Texas A&M alumni, we were able to get into the Letterman’s Club before the game and access the sideline for pregame. After a minute on the field I met Lovie Smith, who was nice enough to take a picture with me.

As pregame was taking place, different Aggie regiment companies marched around the field. Here is one of the regiments walking the live mascot Reveille.

As I took in the atmosphere, it was the first time I walked into a stadium that wasn’t Beaver Stadium, and felt the energy. I was impressed with a few things from the Aggie faithful. All of the coordinated “yells” are extremely loud. Everyone in the stadium is participating and it’s something I’ve never witnessed at that type of level. Also, the band does their main routine at halftime, and the majority of fans not only stay, but stand and clap for the Aggie band.

It’s important to mention that Aggieland hasn’t been very happy lately. Football program was 3-5 (currently 3-7) when we visited. Even with the frustrations of this year and an 11am kick, Kyle Field met my expectations. The fans were gracious and welcoming, the stadium had an energy, and at times the stadium got loud. My only wish is that I can return one day when the vibes are better.