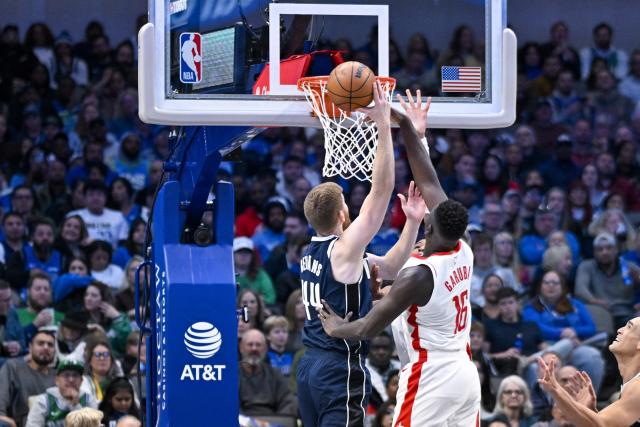 The Rockets battled against the Mavericks in Dallas, but it was Houston who hosted the block party as they come away with Win Number 3 of the season, beating the Mavericks 101-92. It was 48 minutes of stout defense with the Rockets just one block shy of tying the franchise record with 19. The team improves to a 3-12 record for the season and the dream of 70-12 lives on!

The Rockets timing on defense was incredible as it felt like every shot the Mavs put up got swatted into the 2nd row of American Airlines center that would’ve made Mark Cuban weep. Alperen Sengun and Usman Garuba were the tip of the spear on defense tonight with 8 combined blocks.

But the party reached every corner of the rotation as both KJ Martin and Kevin Porter Jr both got blocks against former teammate Christian Wood. Let’s also talk about Jabari Smith who was a defensive stalwart in the 4th quarter, creating key turnovers and proving why he was worthy of the 3rd overall pick. The key to winning is 48 minutes of consistent effort on defense and for the first time this season, we finally got to see it.

The Goon Squad lineup (Green, Garuba, Tari, KJ, Nix) has been a Godsend as they arrived on the scene and turned the game upside down!

The energy that they provide has been infectious with constant high tempo offense and grit and grind defense which was on full display tonight. Every time the Mavericks made their run, (Mavs took a 9-point lead with 4:05 left in the 2nd quarter) the Rockets punched back behind the broad shoulders of the Goon Squad and tacked off a 15-0 run to end the 2nd quarter.

I’d be remiss if I did not mention the fact that Jalen Green and Alperen Sengun are dare I say becoming Kobe-and-Pau-esque. If Coach Silas is looking for any bread and butter on the offense, he may have found his breakfast in running plays for these 2.

When Jalen and Sengun run the pick and roll, it feels almost unstoppable especially when Jalen is hitting his mid range jumper as well as his newly discovered floater. It also helps that Sengun is averaging 56 % from the field for the season. Look for this being used as a primary weapon for the rest of the season.

Usman Garuba deserves a special shoutout tonight. To know where he has come from in regards to his injuries since his rookie year to his sudden rise in these last few games. Garuba is looking every bit of the prospect we were anticipating when Stone drafted him. He put up the game of his career tonight (12 PTS/9 REB/3/AST/3 BLK 5/5 FGA and 2/2 3PA) and has unequivocally earned his spot in the rotation regardless of Bruno Fernando’s impending return.

If this is any indication of how the Rockets plan to play defensively as opposed to this being a one off, then we got ourselves a team whose actually playing for what is on the front of their jersey as opposed to playing for what is on the back of it. Win number 3 is significant because The Rockets held their opposing team to 92 points which is unheard of in today’s NBA. 48 minutes of hard nosed defense. Finish the job, and tonight, The Good Guys finished the job.

Follow @ApolloNBA on Twitter to keep up with all of Apollo Media’s NBA coverage. Also be sure to listen to our official NBA podcast – Summit State of Mind – wherever you get your podcasts. Follow the show on Twitter @SummitSOMpod