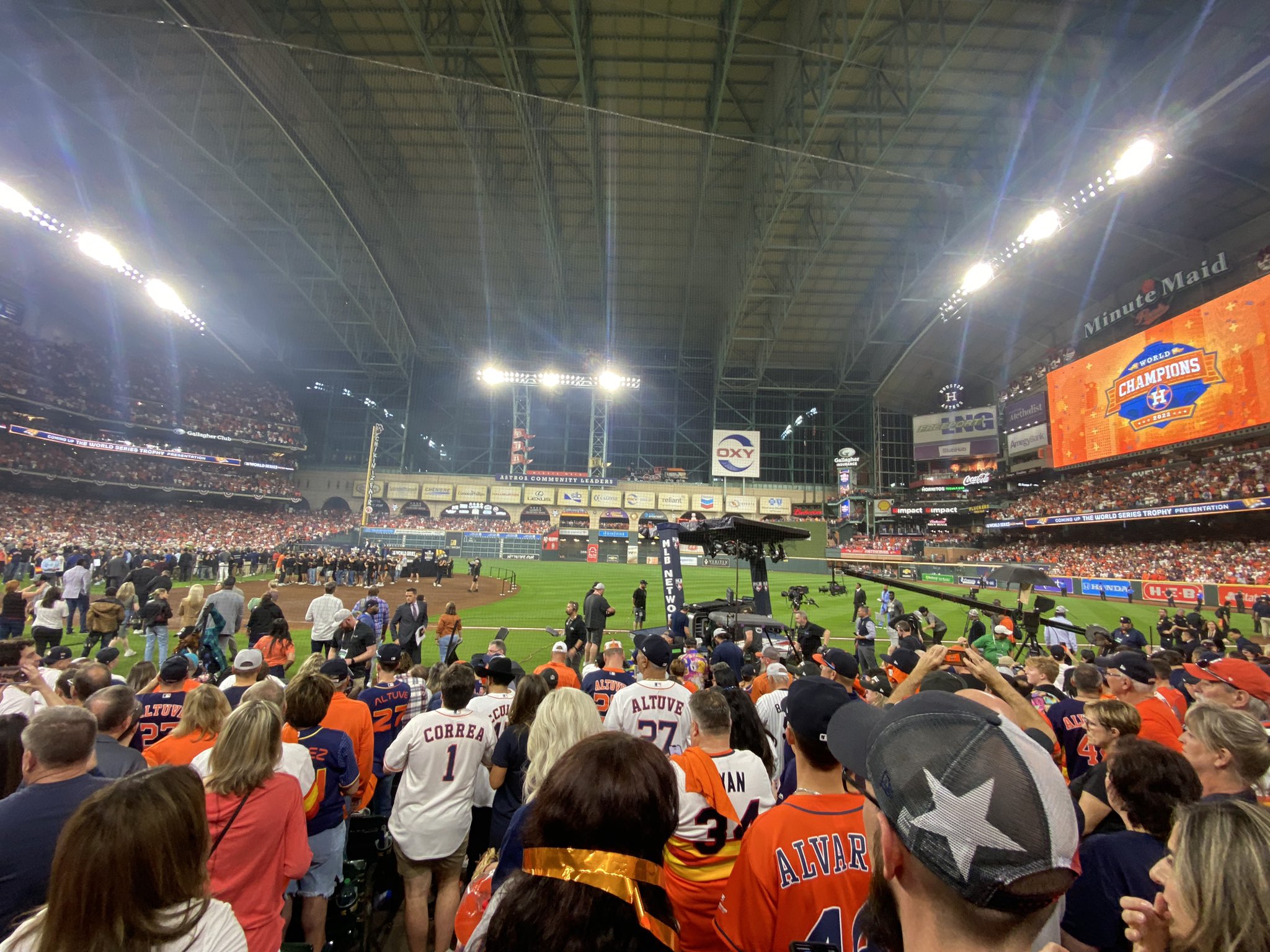 November 5, 2022 was the day that dragons were slain, and demons were buried underneath Minute Maid Park in Houston, Texas. The Houston Astros were once again World Champions, and the city was set abuzz. It’s taken me a while to truly reflect and recall what all happened November 5, 2022, so here’s to remembering World Series Game 6.

That afternoon, I headed over to the Apollo Media office to meet up with all of the guys to brainstorm the plan of the rest of the day and night. Main Street in Houston was already beginning to fill up with people dressed in their finest Astros branded attire. I even saw some H-Town vs. Everyone shirts on my mile long walk to the office.

I met up with Josh, and he carried in a Walmart type grocery bag full of shirts. Those shirts were championship shirts he had printed just in case the Astros won the whole damn thing that night. Even though I had already seen most of the potential designs, I had no desire to open up the bag and take a quick gander.

Josh, Garrett, and Noah began to gather up all of their cameras, mics, battery packs, SD cards, and other technological devices that I don’t completely understand how they work as we talked through the game-plan.

We talked through what we wanted to do once we got over to the ballpark, and the nerves were starting to hit the whole group. “I’m so nervous, I’m gonna throw up,” said one of the boys. Another stated, “Yeah, I’m absolutely terrified of what’s going to happen tonight. Hopefully Framber can calm my nerves early, and I don’t have to worry about anything.”

On the other hand, I felt completely calm for some reason. Every other game that I had watched from the comfort of my own home 764 miles away I was going to throw up as soon as every single pitch began the windup. Every movement was jarring to my soul, every crack of the bat made me convulse. However, in Houston, Texas that day, I was cautiously optimistic.

The boys and me got a quick bite to eat and a couple of drinks to calm the nerves before heading to Minute Maid. We talked through the game plan of how the game was going to go as if we were the ones in the locker room prepping for one of the biggest games of our lives.

Noah and I were seemingly on the roof of Minute Maid up in the Michelob Ultra club by the right field foul pole ready to stand for the next how many ever hours awaiting confetti.

With the navy blue tops, the Astros and Framber Valdez were just chugging along through the Philadelphia batting order until Kyle Schwarber put a laser over the right field wall. The crowd wasn’t necessarily defeated, but it seemed a tad bit deflated. The buzz got quieter and quieter as the sixth inning moved into the bottom of the inning.

The buzz picked back up almost instantly as runners were getting on base, and the giant human being of Yordan Alvarez walked up to the plate. Noah and I looked at each other and almost entirely synchronized said, “He’s so due.” Buddy, was he ever due.

I’m not sure an Astros crowd has ever been that loud. I wasn’t there for game 5 in 2017, but the noise with the closed roof was something that deaf people could hear clearly. Pandemonium ensued as Yordan rounded the bases, and the Astros, the crowd, and the city knew that the World Series was Houston’s and no one could take this one away.

MLB could have ended the game right after Yordan made contact.

For my entire life I’ve watched nearly every sports championship clinching game through the confetti and trophy presentation. I’ve always wondered what it would be like to be there. Obviously, it’s a production, and the stage is super far away from anyone’s seats, and it can’t be that cool, right?

Wrong, the confetti blasted, “We Are the Champions” by Queen blared through the stadium’s speakers, and the players began to find their way onto the stage. It was everything I could have ever hoped to experience as a sports fan, especially since my favorite baseball team won the whole thing. It’s hard to explain, but euphoric is the only word I have for my feelings from the Yordan homer through the trophy presentation.

After leaving the stadium, it was pure chaos outside the ballpark. A sea of people celebrating in the streets of downtown Houston. Flags were flying, people were hugging, celebrating, cheering, blaring their car horns while playing any one of Houston’s rap anthems. It was a spectacle and one I’ll never forget.

Being in the presence of your favorite sports team winning a championship is an incredible experience. As sports fans, we know how long you can wait for your favorite team to win it all. Some fans never get to see their favorite team win a playoff game, let alone a world title (sorry Rangers fans).

It has taken me far too long to write this blog in remembering World Series game 6, but the memories will last a lifetime. The Astros won the whole thing, and I was lucky enough to be there for it.