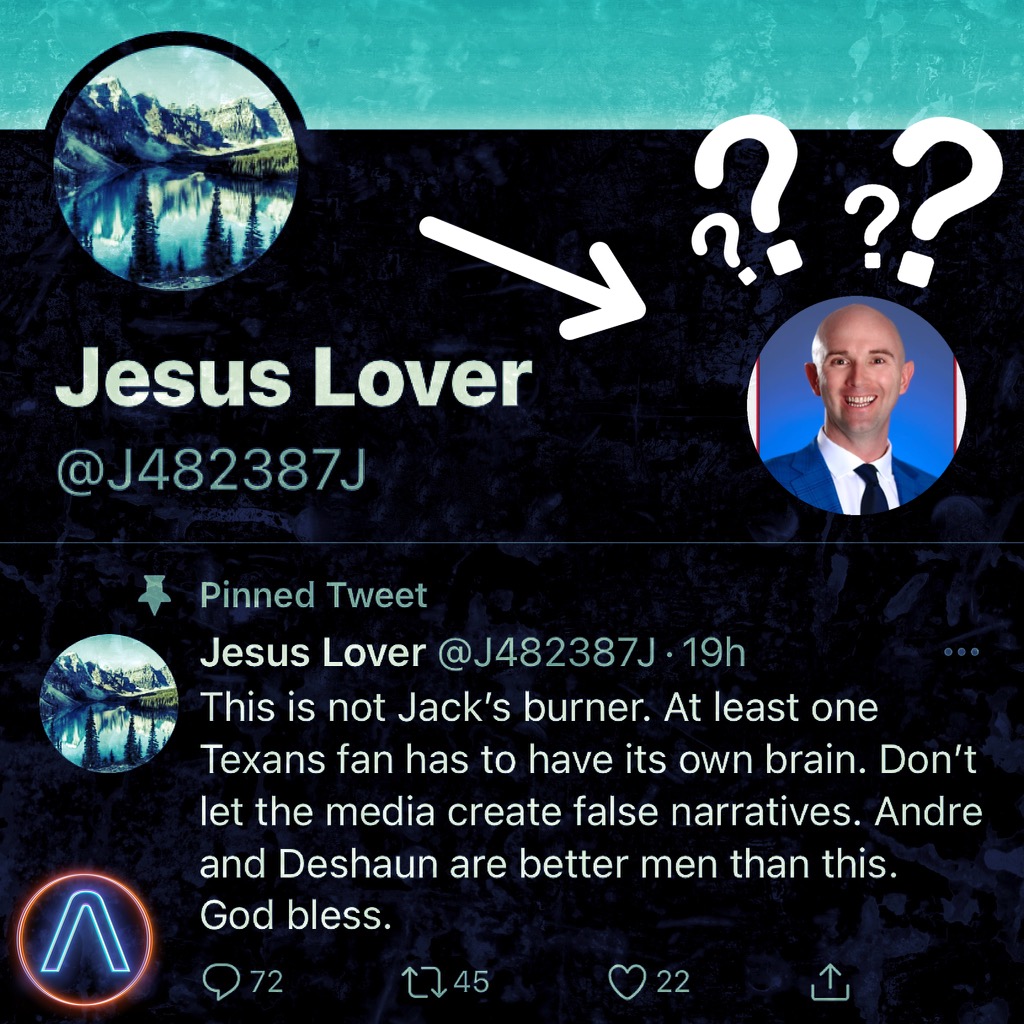 While the rest of the world is chaotically scrambling to decipher between valid info & fake news, we’ve got our own little conspiracy theory brewing right off the 610 highway – the newest antagonist of the revolving shitshow in NRG Stadium is the walking personification of a Venn diagram that’s defined by Jeff Bezos’ unchecked power on one side, the gross incompetence from the Dean in “Community” on the other, and a stupid cue-ball looking ass head in the middle. Recent complaints made by players & personnel about the culture attached to Easterby is what bestowed Megamind with this week’s honorary sash of most hated Houston sports figure, so consequentially, word of a possible burner account attached to the man spread like wildfire. Those of us who spend way too much time in the sports section of the Twittersphere have been swindled once too many times before by the hands of something like a fake Woj bomb, and as a result, we’ve built up barriers of caution when concerning opaque topics like burner accounts. The classic fear of getting got is what originally led me to believe this to be nothing more than a creative troll, but the more I poked around the rabbit hole, the stranger things came to appear.

To understand any baseline connection between Jack Easterby & the potential burner account in question, one must first dissect the @JackEasterby official Twitter account. Jack pretty much never hits that heart button & very rarely sends out an original tweet, but when he does it essentially looks like if scientists found a way to physically morph Jason Garrett clapping on the sideline into 280 characters or less.

Besides that, his retweets are confined to 3 categories: Texans news nuggets, shallow motivational quotes & more Bible-Church stuff than the pope. It’d appear that Mr. Easterby is most likely a very offline person, assumably with poor social media awareness, who’s account is probably connected to the thumb of an intern 90% of the time.

Now to examine the no-name account that has Houston’s social media community up in a roar: @J482387J , otherwise known as “Jesus Lover”. The account @J482387J was created earlier this month (presumably just a handful of days ago), conveniently emerging right when the media began lighting a flame under the seat which Jack Easterby had always sat on so comfortably. Of course, there’s the obvious question of why someone who’s always operated in the shadows, would suddenly concern themselves with the rumblings of social media. Everyone reacts to ridicule differently, and it may even be predictable that someone in his position, a guy who’s been shielded from the public eye for the majority of his career, might shift into panic mode. It can be reasonably deduced that if Jack Easterby did get butthurt enough to create a burner account, his lack of online savvy would undoubtedly be the cause of a fuck up in one place or another. Yes, these observations may be fueled by assumption, but a legitimate reasonable doubt is created once you group these inferences with two other major constituents. First & foremost is the actual composition of tweets that make up the burner account, but perhaps even more convincing are the similarities that appear between the intangibles of the two accounts.

Jack Easterby is a God-fearing, avid supporter of mega-preacher Joel Osteen & a regular retweeter of his on @JackEasterby. Unsurprisingly, the first activity from @J482387J was a Joel Osteen retweet. The only reason Jack Easterby even has any clout in this league is because he used to stand in the same room as Tom Brady. The second RT from our boy Jesus Lover: a postgame selfie video from Brady. The next 25 tweets & replies are solely dedicated to defending the “good” name of Jack Easterby.

It can be assumed that the likelihood of the person behind the account being nothing more than a Twitter knight sent to defend Easterby should be slim-to-none, based on the mere fact that there’s not one semi-legitimate reason that anyone with an IQ over 13 would ride this hard for a shadowy front office personality, especially one who’s only apparent talent is driving a wedge down the middle of the franchise.

To reiterate, in no way are we ragging on the dude for openly being super into his religion, we’re simply observing similarities & drawing connections between the two accounts. So, if it’s a troll, the sprinkle of Bible content is a nice touch, and the follow ratio of press to bible verses seems to be right on par. However, it’s the minor details that should be keep our noses sharp. Not only has @J482387J portrayed the same tendency as the official @JackEasterby account by not liking a single tweet, but the actual characters typed out also seem suspicious. They read choppy like they were written by someone who’s only accustomed to typing emails, and nine out of the twenty-five tweets contained the same sentence: “Jack isn’t the problem”. The icing on the cake for me is the @J482387J pinned tweet that point-blank claims it’s not a Jack Easterby burner account, because it kind of seems like that’d be the exact amount of contingency planning he’d dedicate to this covert operation. We haven’t found a smoking gun, not yet, but each of these sheets folded on top of one another have built the beginnings of a pretty damning story.

Have we uncovered the existence of a last-ditch, Jack Easterby burner account? People are asking, but that’s for you to decide. Admittedly, this’s more than likely the work of an expert Twitter troll, and if it is, I beg of you @J482387J, PLEASE keep this shit up until that pinheaded dickslap is gone for good. The entirety of Houston media is on his ass, hell, Andre Johnson’s first tweet in nearly two years (other than an occasional Crown Royal ad) came in the form of a 279-character Easterby diss track. D.J. Reader even tweeted last night that “oh buddy outta there tomorrow”. He could be canned by the time this blog posts on January 13th, and if that’s the case, then I’d like to issue a round of applause for everyone who hopped on the #FireEasterby train. We did it y’all, @J482387J come out & take a bow, you were amazing. If not, assuming that the McNair’s will act in typical fashion & drag their feet on this, we’re going to need you to continue fulfilling your duty as a martyr behind the scenes, just until that Adam Schefter confirmation pops up on your phone. If the off chance turns out to be true, and this is Mr. Easterby’s alternative account, then there could be bigger implications at play here than just his existence within the franchise. For him to act this out of character would surely imply that he’s actively concerned about his job security, which could insinuate that there’s been a turning of the tide inside the mind of Cal McNair – Perhaps Cal proves to be more susceptible to the demands of public opinion now that Bill O’Brien isn’t around to take the shots anymore. Maybe, just maybe, this fanbase holds a little more power than it thinks. It looks like we’ve got a 3-1 lead on Howie Mandel, but the series aint’ over yet, keep raising hell until that $4B mustache does what we want. Granted, handcuffing a sports franchise owner to the radically swinging demands of their market probably isn’t a good formula for long-time success, but to be frankly honest, I don’t think Houston wants the McNair’s around all that much longer. When ownership runs a town’s patience dry, it’s the fanbase who incites themselves as judge, jury & executioner in the end.