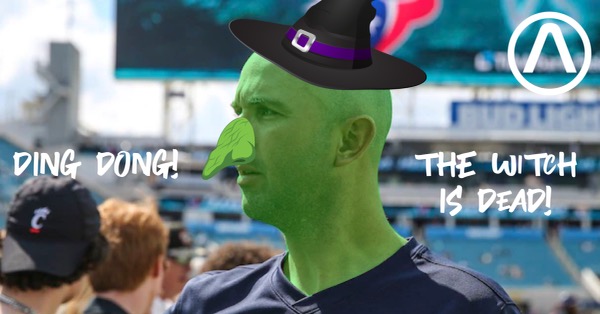 On a week where the Astros are sweeping through the playoffs & the Rockets seem to be solidifying a bright future of their own, how in the world could a 1-3-1 Texans organization garner any amount of excitement from the Houstonian Fandom?

THAT’LL DO IT! Houston has finally decided to cut out the cancer. For anyone who may be confused as to why Texans fans are rejoicing over some random nerd in the front office getting canned, allow me to set the scope. Ever since that man walked in the door he’s proved to be nothing but a parasite determined to milk his host for the most that he possibly can. The way that this off-brand Bezos wielded influence inside the walls of NRG was essentially a mirror image of Aidan Gillen’s character in “Game of Thrones”, Petyr ‘Littlefinger‘ Baelish – an opportunistic leech who’ll resort to any level of manipulation necessary to satisfy his own personal ambition for power.

The Texans’ on-field product has been in a death spiral ever since Jack started impacting football decisions. He never seemed too keen on retaining our guys who had, “elite talent & athleticism,” (Kareem Jackson, DJ Reader, Deandre Hopkins, etc), but he does seem to love a, “sneaky-athletic / high-IQ,” type of player if you catch my drift. He also had the bright idea to throw Bill O’Brien the keys to not just one, but TWO high-level positions, neither of which he was qualified for. Yet, even though this year’s squad is set to be another bottom 5 finisher, this isn’t even where the true disdain for this man lies. His super weird way or the highway agenda has pushed out anyone who dared to speak against him, which included nearly every Houston Texans legend. He displayed zero respect or regard for the culture of the team or the city, and the negative impact that his presence has left on this franchise will continue to be felt for some time to come. Nevertheless, hopeful fans are wondering if Jack’s departure will incline some of the cultural cornerstones who Houston lost in the whole debacle to return to the city. Time will tell.

After a much-too-long journey, the #FIREJACKEASTERBY movement has finally completed its course. I’d like to thank everyone who bitched & moaned with me on the internet for the past two years, we did it guys. While my words may seem harsh, they ring true, so don’t spare any sympathy for this Anemic Mr. Clean. I’m happy he’s gone & you should be too. Let this be a life lesson: when this many people are excited about your downfall, YOU are the problem buddy. Roll the clip…

If you liked this blog and want to hear more about Jack Easterby & the Houston Texans, tune into our weekly NFL show “Off the Gridiron” https://youtube.com/playlist?list=PLfOTngfyys_xUvnvqquC_-45AxS_X-klx and follow @ApolloTexans on Twitter for Texans news & updates!