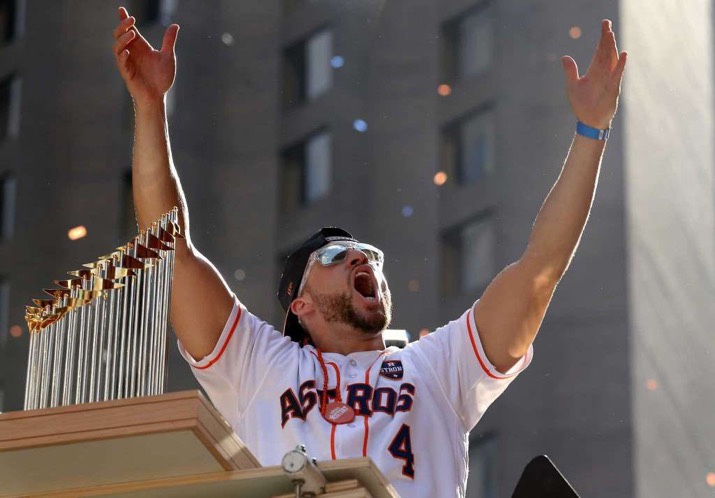 I can not say thank you enough to King George. He was the cornerstone pick, he was the SI 2017 prediction cover boy, he was everything we hoped he would be and then some, he was our guy. George Springer gave this city and organization almost a decade of memories that we will have 4ever. Memories we will tell our children and our children’s children one day and for that I am thankful for George Springer. When the Rays celebrated Game 7 of the ALCS in San Diego I knew that was going to be the last time we saw Springer in an Astros jersey and even when the news broke last night I was still sick to my stomach. I was on twitch and had to put on a face but damn it just felt like you caught a straight jab from Ali and had your breathe knocked out of you. I have said it time and time again, GEORGE SPRINGER DESERVED THE BAG. And boy did he get it. Toronto paid the W.S. MVP 150 million dollars on a six year deal and have made them themselves the lead dog in the AL East. There was just no way the Stros were ever going to offer something like that and now we are left with just the memories of not what could have been , but the memories that make you smile, the memories of hey remember that time George called that umpire a cocksucker or the memories of his trademark double thumbs up touching homeplate after a Springer Dinger. (Damn going to miss saying that) He was our Mr. October and if their is not a statue of #4 outside of MMP the day he retires or his jersey in the rafters of MMP then their will be a revolt that I will lead.

We are left with the fact that we get to see George tear up Yankee, Red Sox, Baltimore and Rays pitching for the next 6 years. Hopefully in 2027 we can get him on a one day contract and he can retire an Astro like he deserves.