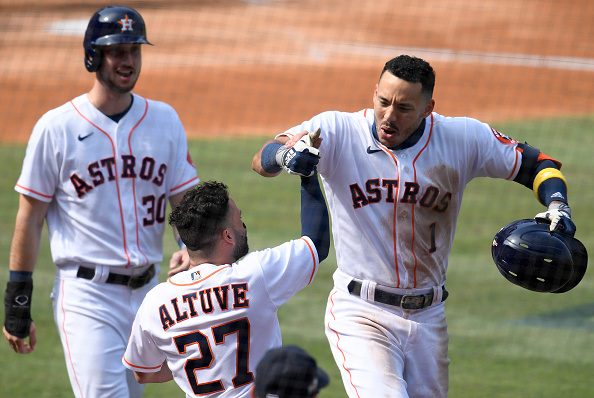 So, following an off-season which felt approximately around a decade long the Houston Astros finally commenced their 2021 regular season last night with a big win over the Oakland A’s. I found myself going back to the one recurring thought I have had all throughout the Spring in the lead-up to Opening Day and which I simply cannot shake: what team do outside observers exactly think they are watching? It certainly isn’t the team we truly know and love.

The Offense
Everywhere you looked in season previews, any talk of the Astros was dominated by how they were a spent force and no longer what they once were. Seriously? Whilst no one would suggest anything as preposterous as the legendary George Springer’s sad departure being a positive, the remaining components of the Astros offense in 2021 are still unquestionably a lethal unit.

How could any knowledgeable writer, announcer or fan come to the conclusion that a lineup boasting the superlative batting talents of Michael Brantley, Carlos Correa, Jose Altuve and Alex Bregman would be anything less than an offensive powerhouse? Add in the developing rise of Kyle Tucker, a Yuli Gurriel desperately striving for a career Indian summer and – most influential of all – the return of a fully healthy, bionic knees edition of Yordan Alvarez and I truly believe the 2021 Astros are positioned to spectacularly shut down their critics.

Too many people placed their trust in the mirage of the 2020 sprint regular season (is Christian Yelich suddenly finished at the Brewers? No.) As Brantley first, then Bregman second, launched back-to-back homers in the 8th to drop the hammer on the floundering A’s last night, you could almost tangibly sense that any rumours of the Astros’ demise have been greatly exaggerated.

The Pitching
The story of the Astros’ pitching also mirrors the offense somewhat. No one would argue that Justin Verlander’s long-term, likely permanent (in an Astros context), injury absence is a positive. However, just look at what options the Astros have at their disposal even without him:

Zack Greinke delivered an excellent Opening Day outing over 6 scoreless innings where he was in total control, even at his age he is far from finished;

Cristian Javier posesses an incredible degree of raw talent, the only major question facing him is can he improve on his stamina and do so over 162 games;

Lance McCullers – buoyed by his recent contract extension – has long since proven he is a special pitcher even after Tommy John surgery;

Jose Urquidy is absolutely nails on the biggest stages – he will have a huge 2021, book it;

Jake Odorizzi is not a pitcher I’m enormously familiar with but he seems tailor-made for Brent Strom to work his magic on and bounce-back;

…anyone else I’m forgetting? Oh, only future staff ace Framber Valdez coming off a breakout year ready to pick up where he left off when he returns from his finger injury.

Then we get to the bullpen – veteran talents in Joe Smith, Brooks Raley and Ryan Pressly; added quality in newcomers Ryne Stanek and Pedro Báez; a phalanx of rookie talents including Enoli Paredes, Blake Taylor, (starter/reliever) Luis Garcia and Bryan Abreu. This is no weak link. Workload will be a challenge but that is a gauntlet every club in Major League Baseball will run in 2021 over the return to a full 162-game season.

The Overview
The 2021 Astros’ greatest crime is that they aren’t the 2019 Astros, and there is no shame in that.

To all of the armchair critics writing this team off – watch out. This is the most underrated Astros team ever.