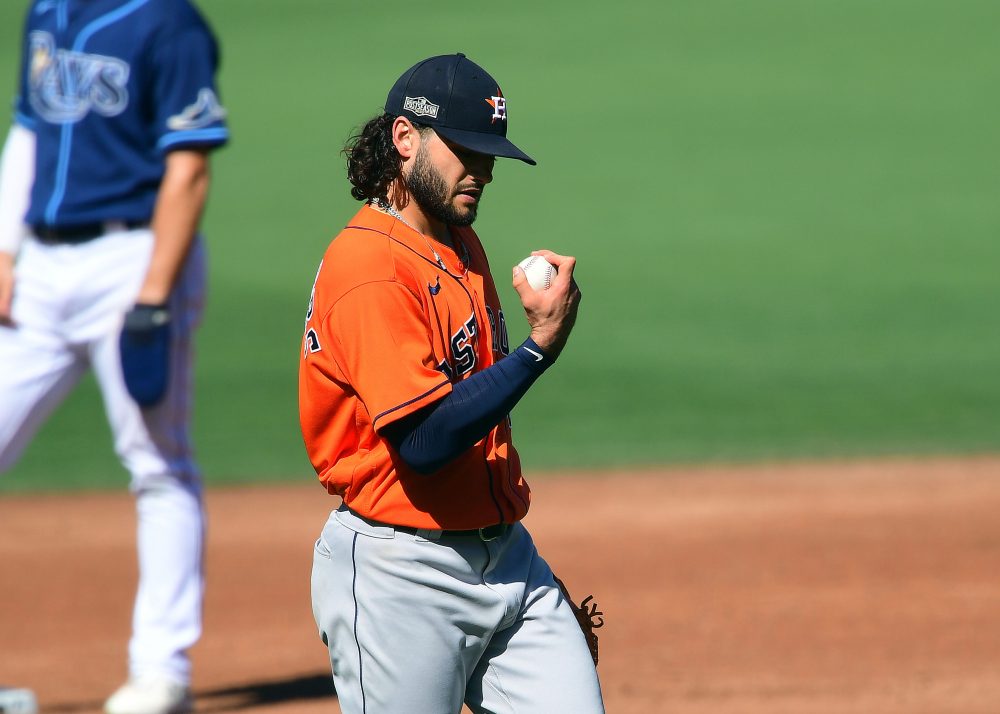 Early indications from the 2021 season are flashing massive warning signs that Lance McCullers Jr is a new pitcher. Of course, much of what was always there remains: Less than stellar control means that 7 innings is nearly out of the question on a start-to-start basis, he will rack up plenty of Ks, and the hard sinker will always be excellent at inducing ground ball outs.

But there is a brand new wrinkle in Lance’s game that appears to be quickly developing into a chasm, separating what he was and what he will be. When he unveiled his brand new slider in spring training, I assumed it would be used in a similar fashion to his cutter in 2020 – something in the back pocket for the hitter to think about, but rarely see. Over his first two starts of the season, I think it’s clear that Lance, Maldonado, and the organization are planning on making drastic changes to his pitch mix moving forward. I’ll do my best to illustrate why this is so groundbreaking for Lance, and speculate on its implications moving forward.

McCullers threw his cutter just 16 times in the entire 2020 season, good for 1.8% of his total pitch mix. He relied on his elite curveball nearly half the time, and split the rest evenly between his sinker and rapidly developing changeup. In 2021, his new slider is already his most used pitch, throwing it nearly a third of the time. That’s more than the sinker, and more than the devastating knuckle curve he has come to be known for. It is entirely possible it’s just something he’s working on, but that kind of experimentation is usually restricted to spring training. I’ll use his April 9th start against Oakland as an example, and we can examine an apparent new pitching philosophy together.

Those clips can hopefully give you a sense of the horizontal break evident in Lance’s slider – it looks like it travels horizontally in nearly a straight line, and therefore stays on top of the natural plane of a right-handed hitter’s swing. It’s a slider with “hop”. You can see Piscotty’s natural bat path finish under, while Aramis Garcia falls for the horizontal movement by chasing out of the zone completely. The numbers align with the eye test in this case, as well. This slider has 14% less vertical movement and 95% more horizontal movement than the league average slider. It moves a ton, with no depth. This is critical for Lance, whose curveball has enough depth to separate these breaking balls into two completely different offerings.

What I picked up on while watching the April 9th start after a few innings was the entirely different strategy when attacking right-handed hitters as compared to lefties. Right handers through Lance’s first two starts are seeing his slider 49% of the time – more than any other offering – followed by the sinker at 43%. He is almost a two-pitch mix pitcher against righties, sprinkling in the changeup occasionally. Against lefties, his mix is dramatically different. Lefties have seen his knuckle curve (again, important to emphasize LMJ’s curveball is a consensus top pitch in baseball and essentially carried him into a front-end caliber starter for years) 63%(!) of the time, and with a 46 whiff% attached, but through two starts has basically ditched his best pitch in favor of the slider against righty bats. McCullers has always boasted reverse splits, being more effective against lefties than righties over his career.

The slider is his ticket to balancing out his effectiveness. Lance remains more or less the same pitcher against left handed bats that he always was, but against righties the slider has the opportunity to change everything. His knuckle curve’s shape is and always has been brutal against modern-day lefty swings when tunneled off a sinker or changeup with armside run, but a less-than-perfect one can run into a right handed bat trying to elevate. The slider’s tremendous horizontal break mitigates that issue, a much more difficult pitch for a righty to elevate and celebrate against when thrown correctly.

Hopefully we can agree on the theory behind the new offering, and why it would make McCullers more effective against right-handed bats in the future. Let’s take a look at some examples of his attack plan against Oakland hitters. Shout-out to Tony for putting together these sequences.

First, we will look at a Jed Lowrie AB from his first time through the order.

What I believe is worth noting here is that get-me-over slider to start the AB. This is Jed Lowrie’s first time seeing Lance in a long time, and certainly the first time seeing the slider. Giving Jed a peek at the new offspeed allows for some mind games – which offspeed is being thrown, exactly? He doesn’t throw the slider again, because its shape is not conducive to whiffs from a veteran lefty. Enter curveball, exit Lowrie.

Similar story for Seth Brown later in the ball game, but no slider to show. Lance can always mix in a sinker or changeup, both fading away from a lefty’s barrel here and get some soft contact. He doesn’t need to. I’m using these examples mostly to show how complete a pitcher Lance is and always has been against southpaws, but also how most of these pitch shapes are not ideal against righty bats. A righty can spit on a curve tailing away from them much easier.

Here’s where the fun begins.

The 0-0 slider and 1-2 sinker are tunneled off each other perfectly in this at-bat, a large part of my theory on why Laureano got tied up so bad by the sinker. You can’t tunnel a curveball in that same location – his knuckle curve’s shape would wind up right over the plate if he tried to work it off the sinker inside. The slider’s lack of vertical break lets it finish in the upper third but not in the danger zone. Not many hitters are turning on that.

Additionally, you can see Laureano swing right under the 0-1 slider on the outside corner. Another example of how unnatural it is for a right handed bat to match planes with such horizontal break.

Lance is becoming a more complete pitcher, and it undoubtedly earned him his 5 year extension. With the development of this new slider, there are not many pitchers with his arsenal in the league today, much less pitchers who are able to switch their breaking balls based on handedness. There is some concern in my mind that right handed hitters will pick up on these tendencies quickly and begin to sit slider, which would necessitate even more adjustment on Lance’s part. Still, another trick in the bag is objectively better than nothing. The ability to develop a brand new, seemingly effective pitch in his final year of arbitration serves as a healthy reminder that quick learning and adaptability are critical, often overlooked components within player valuation.

To their credit, Astros player development is revered for a reason, and the analytics boys almost certainly shaped the slider to get right handed bats out. This is Lance’s second year removed from Tommy John, which is notoriously the breakout year for most (Corbin, Stripling, etc.) under 30. I would not be surprised to see it happen here, as well.