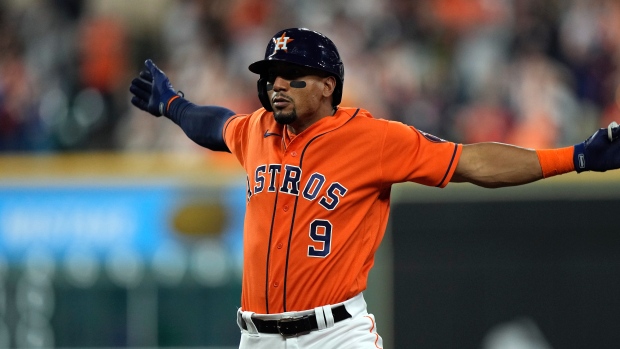 0-2 COUNT GAME ON THE LINE AND ROBEL GARCIA SENDS THE ASTROS TO A TWO GAME WIN STREAK.

Baseball is funny sometimes because the Astros really should have not won that game last night yet alone get it to extra innings. But here we are on Saturday morning enjoying a 2 game win streak that feels like 200 wins in a row.

Ryne Stanek and Ryan Pressly were NAILS in the 8th and 9th inning giving this team a chance to win a ballgame. I am 100000 percent certain that this combo is ALL STAR caliber to lock down games.

The offense was kept at bay all night due to Andrew Heaney being on cruise control and then Yuli Gurriel put the team on his back yet again and sent one into the Crawford Boxes. Yuli, when he is on is just a hit machine and damn I wish we could have seen him in his prime.

The Extra Inning rules SUCKKKKKSSSSS so much. The Astros gave up 2 and it was all but over with Diaz, Straw and Castro coming up so we thought. Straw got a RBI knock on an infield single where he was the only person on the roster to beat that out. YOU CANT TEACH SPEED. Castro followed up with a ground rule double that would have easily scored Straw and it looked like we were snake bit on that bad break. Correa tied the game up on a sac fly where some reason Walsh missed his cutoff man to get Straw at the plate and allowed Castro to tag up as well.

Then stepped in the prince who was promised.

Astros win and we go for the series win this afternoon.