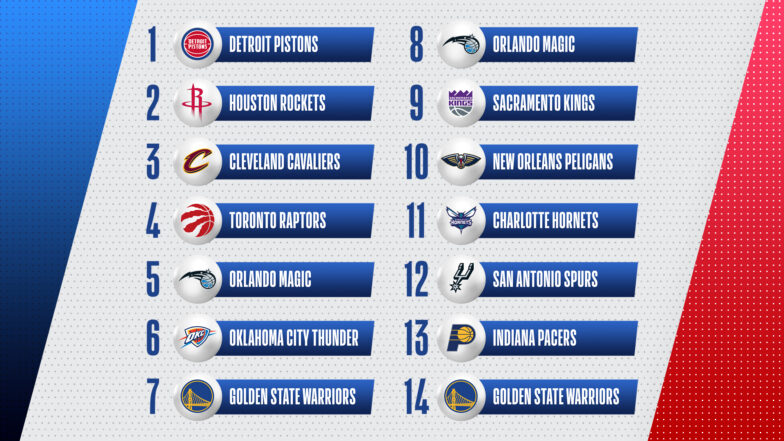 Thanks to the draft lottery on Tuesday, the Houston Rockets miraculously held onto their pick and will be selecting No. 2 in the NBA Draft on July 29. They did so by essentially winning a coin toss. They had a 47.9% chance to lose their pick to the Thunder and a 52.1% chance for it to be in the top-4, which was protected. I think that every Houston sports fan inherently expected to lose the pick due to prior history, but it was a shocking relief to see the Orlando Magic logo on the screen as they fell to the No. 5.

Now, the fun begins. The Rockets haven’t selected in the top-5 since 2002 when they took Yao Ming at No. 1. Houston needs someone that can be a building block into the future as the team looks to get back to relevancy in a natural way. While it’s possible that they could look to move the No. 2 pick, it certainly would have to be for a talent that fits the current timeline of the young Rockets.

As for when they most likely keep the pick, who should they be taking? It essentially, in most peoples’ minds, has narrowed down to two players: Evan Mobley and Jalen Green. Both of them have tremendous strengths and upside and the Rockets honestly cannot go wrong either way (I’m sure this will age well in a few years). Rockets Twitter, of course, is divided pretty evenly on the topic. We’ll get some opinions from some Apollo writers/Rockets Twitter members on Monday’s roundtable, but for now, let’s take a quick look at what each prospect brings to the table.

If there is a favorite among fans on who the Rockets should pick, it is probably Evan Mobley. He has widely been seen as the No. 2 prospect in this draft for quite a while now.

Mobley is a big 7-footer that has the skills and potential to seriously impact a team on the defensive end of the court. It wouldn’t be a surprise to anyone to see him competing for Defensive Player of the Years soon. His athleticism also allows him to guard the perimeter if he is switched out there, something that is just extremely impressive from a player his size. Take a look at some defensive highlights below:

On offense, Evan Mobley can be a difference maker as well. He runs pick-and-rolls beautifully and has great hands to catch and finish. He is quick enough to beat bigger centers off the dribble, especially if he catches the ball inside the arc. Mobley also has shown flashes of being a great playmaker and makes the right pass quite often.

Evan Mobley pretty much does everything that you want a modern center to do. He could bulk up a bit and improve his jump shot, but I am confident that he will. You aren’t getting someone who will likely be a dominant scorer, but his two-way versatility/potential is unmatched in this draft. I highly encourage you to look up more of his highlights, because he is fun to watch on both ends.

Jalen Green is a completely different player from Mobley. Instead of being a two-way big man, Jalen Green is a guy with the potential to be the top scoring option on a competing team.

There are plenty of positive things to say about Jalen Green. He competed in professional basketball last year in the G League, including against our guy Kevin Porter Jr. For the G League Ignite, he averaged 17.9 points, 4.1 rebounds, and 2.8 assists a night on 46.1% shooting, 36.5% from 3, and a remarkably efficient 61.3% TS%. After getting acclimated to the league in the first six games, he finished with a 10-game stretch of averaging almost 20 points a game on 40+% shooting from 3.

He is also extremely explosive. He has some things to work on in terms of beating guys 1-on-1, but this type of athleticism does not come around often. Take a look at some of his highlights from both high school and this year in the G League, as put out by ESPN:

The thing that is so attractive about drafting Jalen Green is that you don’t find scorers like this very often, especially at 6’5 and 19-years-old. Pairing him with KPJ can lead to an incredible backcourt for years to come. In a league that is centered around elite superstar guards/wings (as you can see in the NBA playoffs right now), it would be very hard to pass up Green.

Should Fit Play into the Draft Choice for the Rockets?

A big motivator each year come draft time is whether or not you should draft for fit or for talent this high up. I personally think that talent should be the ultimate motivator in most circumstances.

The main reason why I bring this up is that there is discourse around Mobley’s fit next to Christian Wood, as both are athletic big men. Jalen Green as a scorer pretty much fits in anywhere and shouldn’t stunt the growth of KPJ as an offensive threat, so there doesn’t seem to be much concern there.

As I said, though, fit shouldn’t determine selecting top talent. If the Rockets feel like Mobley is the best player available at 2, they should take him without any worry.

Man, this is way too difficult of a decision to make. I don’t envy Rafael Stone right now (okay, of course I do).

If I had to choose, I think you have to go with Evan Mobley. His ability to impact both ends is too much for me to pass on right now if I was the Rockets. Pick-and-rolls with him and KPJ would be electric and I actually think that he could fit pretty well next to Christian Wood (knock on Wood). With how back-and-forth I’ve been since hearing that the Rockets are picking No. 2, though, don’t be surprised if I change my mind by the time you read this.