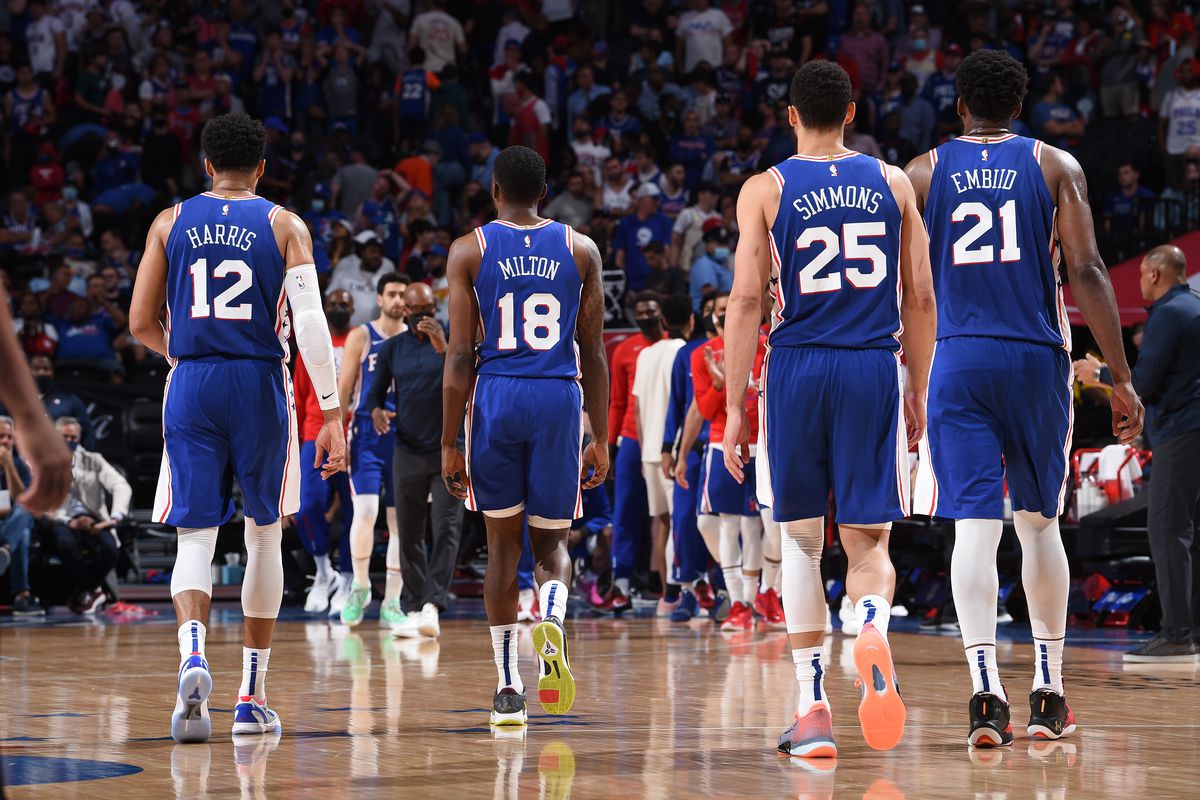 This NBA postseason has been wide open like few others in recent memory. I mean…the Los Angeles Clippers are in the Conference Finals. Clearly, something different is going on. The one seed in both conferences faltered in the second round, and both the reigning champion and this year’s newest SuperTeam/Big 3/title favorite succumbed to injuries early. The Suns, Clippers, Bucks, and Hawks were each able to overcome or take advantage of injury concerns and make it to their respective Conference Finals, and lottery teams like the Rockets are looking to the draft to load up for the future. The Celtics have already started the reckoning. The Nuggets had a season-ending injury to one of their key pieces. And teams like the Knicks, Grizzlies and Wizards overachieved to get where they got this season so they won’t be included in this list.

But the teams that considered themselves “win now” contenders that weren’t able to take advantage of the wide-open field have to ask themselves, “if this wasn’t the year, when is the year?” It’s time to face hard realities this NBA offseason.

Let’s examine the failed playoff teams and what they have to do during this NBA offseason to take that next step to true championship contenders.

This one is pretty obvious and seems to be the general consensus after the one-seeded Sixers flamed out in the Conference Semifinals against the underdog upstart Atlanta Hawks in a devastating fashion. They had what most would call the more talented roster, homecourt advantage, and double-digit leads in Game 4 and 5 (including a TWENTY-SIX point lead in Game 5 at home). Ben Simmons, with all his versatility, defensive prowess, and physical tools, simply will not shoot jumpsuits and can’t make free throws consistently. We’ve all seen it his entire career and the Sixers are going to have to finally do something about it if they want to become a championship-level team instead of a perennial second-round exit. It’s safe to say at this point that The Process has been a failure. Daryl Morey and Doc Rivers have their own shortcomings but they don’t need to weigh themselves down with this specific albatross. Ben Simmons could greatly benefit from a change of scenery this NBA offseason as well. His issues seem to be, at least partially, a mental thing, and it wouldn’t hurt for him to find a fresh start in a new organization like the Timberwolves or the Blazers with less pressure and media attention than the 76ers. The Sixers may have to sell low on Simmons, but it’s best for both that they do it sooner rather than later.

This one is a bit of a hot take, but I fully believe that it’s time for this era of Trail Blazers basketball to come to an end and to rebuild the team from the ground up this NBA offseason. That means moving on from Damian Lillard. It’s been nearly a decade since Dame arrived in Portland and he’s given that city a lot of deep 3s, memories, great first-round moments, memes, and not much else. Lillard will be 31 this July and there’s reason to believe he’s at the peak of his powers and his value this offseason. And it’s not like the Blazers are just a couple moves away from being contenders with him either. After a second straight first-round exit – this year against the short-handed Denver Nuggets, starting a backcourt of Facundo Campazzo and Austin Rivers – the Blazers will need to build a defense from basically nothing. Swapping coaches may help, as could a potential Ben Simmons for CJ McCollum swap. But does anyone truly believe that will be enough to move the Blazers from the middle of the pack to true contenders? With reports circulating that the star himself is “antsy,” now may be the time to call the teams in the top 4 of the draft to see which of those picks and what else you can get for Damian Lillard to start over. Or which fringe contenders may be willing to trade a young future All-Star and more assets for a win-now Lillard.

The Dallas Mavericks knew things had to change. After a second-straight first-round exit to the Los Angeles Clippers, this time after coming home to Dallas with a 2-0 lead and then losing all 3 of their home games, The Athletic reported on tension in the front office. In the following days as the #FreeLuka agenda went wild on Twitter, it was announced that the team’s long-time GM Donnie Nelson and Head Coach Rick Carlisle would not be returning. The hires of former Nike executive Nico Harrison as GM and especially former Mavericks point guard Jason Kidd have been met with…mixed reviews, to put it kindly. But the Mavericks’ issues as an organization and as a team go deeper than just what those 2 particular men can fix. The roster is simply not good. Outside of Doncic, there is no other top-end offensive or defensive talent on the team, and these days you need at least 2 of those guys in order to compete at the highest level consistently. Doncic led the team in points and assists by a wide margin in both the regular and postseason. He was 2nd on the team in rebounds in the regular season and led them in the postseason a fact entirely unacceptable for a team that features not one but two seven-footers in prominent roles. Seeing the Suns and Hawks in the Conference Finals because they were able to successfully build teams and add free agent talent around their picks from the same draft class as Luka has to sting for the Mavericks and their fans. And all indications early on seem to be that Doncic won’t be as easy to keep in Dallas for his entire career as the legendary Dirk Nowitzki, so the timeline to contend has been moved up. The Mavericks have to truly examine why they struggle to sign big-name free agents and retool the way they target talent in trades because Luka Doncic cannot do it alone, even with a new Head Coach. The Miami Heat made a surprise run to The Finals during the NBA Bubble last season and may have been a legitimate threat to win the whole thing if not for unfortunately-timed injuries to Bam Adebayo and Goran Dragic. We can (and probably will) debate forever about whether or not the Bubble run was a one-time fluke due to the circumstances or if the 2020 Miami Heat really were the second-best team in the league. But regardless of what you think about that team, the 2021 team proved that the other contenders in the Eastern Conference have passed them by. Miami struggled all season long and made a failed effort to acquire James Harden early in the year before making a late move for Victor Oladipo just before he got injured. They finished the regular season strong going, 8-2 in their last 10 to secure the 6th seed. They were then very quickly dispatched by the Milwaukee Bucks in a first-round sweep. Only 1 loss, Game 1, was competitive. No player averaged more than 16 points per game across the 4 contests and the Heat struggled to find bench production beyond Goran Dragic. Victor Oladipo is a free agent but may be able to be brought back on a cheap deal. Duncan Robinson is a restricted free agent who could command a high salary, and there are already rumblings about Tyler Herro‘s future with the team. As incredible as the #HeatCulture is, it wasn’t enough to stop Khris Middleton and Jrue Holiday from embarrassing them in the first round. And the Heat will have to find a way to acquire more consistent role players, and potentially another all-star level talent, if they want to catch back up to the rest of the contenders out East.

Look, I’m not going to be the person that tells you LeBron James is now officially the Washed King. People have been doing that and being proven wrong for like five years now and he keeps coming back and winning more. But LeBron has now missed significant time with injuries in two out of three years with the Lakers and the one season where he didn’t, he got three months of rest in the middle. He’s 36 years old and there’s reason to believe time is finally catching up to his body, even if not his game. When he’s healthy he’s still incredible and one of the five best players in the NBA at minimum. But the Lakers can no longer rely on LeBron (or Anthony Davis for that matter) being healthy enough every year to turn on God Mode in the postseason if they want to win another championship. And there’s no telling if a healthy Lakers team would’ve had enough talent to beat the Suns or other title contenders at their full strength. Anthony Davis has a very long history of injuries to just about every part of his body and had a career outlier shooting performance during the NBA Bubble on the route to the title. The Lakers are going to have to plan for LeBron to take on a reduced load both in the regular season and the playoffs by acquiring a 3rd star and better role players if they want to be true title contenders moving forward.

I’ve tried to be fair to everybody on this list because we here at Apollo Media are a respectable outlet looking to make good, fun content for everyone. However, at the end of the day I’m just a person. A person from Houston who likes to see the Utah Jazz fail so I can tell jokes about it on the internet. That boy Rudy Gobert and his 3 DPOY trophies was out there getting cooked by Reggie Jackson fam. Someone named Terance Mann dropped 39 points and all the Stifle Tower could do was watch in horror. Cause it’s not like he could go over there and guard him. Nobody else on the Jazz can either and that’s probably the actual problem, Rudy Gobert really is their only good defender. But if your best defender is food, then that makes the rest of your team a buffet and boy Paul George came to EAT. Kawhi Leonard wasn’t even playing the last two games and the Jazz couldn’t get one measly win either time. Better luck next year bros. Go buy a Vernon Maxwell jersey if you want to feel like a winner.