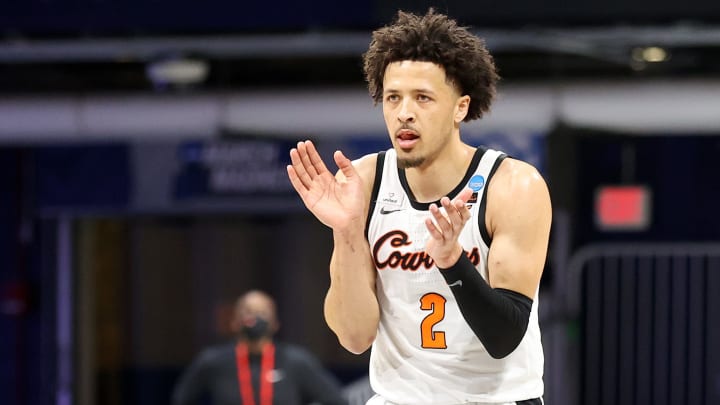 The draft is just under a week away. The Houston Rockets currently hold the No. 2 pick in it and are likely to select one of Jalen Green or Evan Mobley. However, recent rumors suggest that the Rockets will attempt to trade up for No. 1 due to their infatuation with Cade Cunningham (same). Will they be able to pull off the trade, or will they be satisfied with the other top prospects?

Let’s talk to some of our contributors here at Apollo and see what they think about this and other Rockets-related questions:

What are your thoughts on the Rockets potentially trying to move up and select Cade Cunningham?

I would not mind the Rockets moving up for Cade Cunningham, but only under one condition. It is critical that Houston does not give up too many assets to move up one spot. If the rumors about Detroit wanting Jalen Green are true, then the Pistons do not have enough leverage to request the king’s ransom for Cunningham.

Recently, there have been reports that the Rockets are very high on Cade Cunningham and are trying to trade up to pick at one. I would love the Rockets to trade up to get Cunningham. However, Detroit’s asking price is too steep then I would prefer them to keep the picks they currently own.

Cade Cunningham is a generational talent, so it’ll cost the Rockets a lot if they wanted to trade for him. Personally, I like that the Rockets are exploring all of their options, bringing Cade to the team alongside Kevin Porter Jr. and Christian Wood would look great for the upcoming years. If Houston can acquire Cade without dealing too many valuable picks away, then I’d make the trade.

Of course, I would absolutely love it if the Rockets did this. Cade Cunningham is a talent that you don’t pass up on, so if the price is reasonable (or even slightly unreasonable), you have to take that chance. Cade has an extremely high floor and an extremely high ceiling, so having him in Rockets red for the next x-number of years would accelerate the rebuild.

What is the most you would give up for No. 1? What does a realistic deal look like for you?

The most I would give up is the second pick, pick 23, and the first that came from Detroit.

The most I would give up to trade for the first pick is pick two and thirteen. That’s only if we are able to trade for the Pacers’ pick. Including anything else in a package for the Cunningham would be an overpay in my opinion.

If the Rockets make a move for Cade, acquiring the No. 13 pick from Indiana would put them in the best position to do so. Below, I’ve outlined the most I would give up to move up to the No. 1 pick and what a realistic deal looks like, within these trade scenarios.

All in all, trading up to the No. 1 pick will most likely consist of four first-round picks, which is a lot to trade… Especially when the Rockets would have Jalen Green or Evan Mobley sitting in their laps at the No. 2 pick. But if Rafael Stone and Co. believe this kind of trade is in their best interest to make, I won’t be upset at all, especially if none of the picks traded are coming from the Brooklyn deal.

I’ll save going into the details due to Brad’s awesome breakdown above, but I feel pretty similar. I would even throw in our other pick in the 20s this year and/or a future pick we own. As I said in the first question, I am willing to overpay a little bit.

Rank these prospects that could be available at No. 23/24 in the draft: Jared Butler, Tre Mann, Jaden Springer, Cameron Thomas, Trey Murphy.

In the liklihood that Eric Gordon gets traded, what is your favorite EG reaction picture?

With Eric Gordon possibly getting traded this offseason, my favorite reaction picture has to be his face during the Rondo CP3 scuffle.

In my opinion, an extremely underrated Eric Gordon “reaction” picture. If he’s really going to be traded, then I’m going to miss him.

Thank you for tuning in for our weekly roundtable! Be sure to come back next week, as it should be a special one for the week of the draft.

In this article:houston, Houston Rockets, Rockets