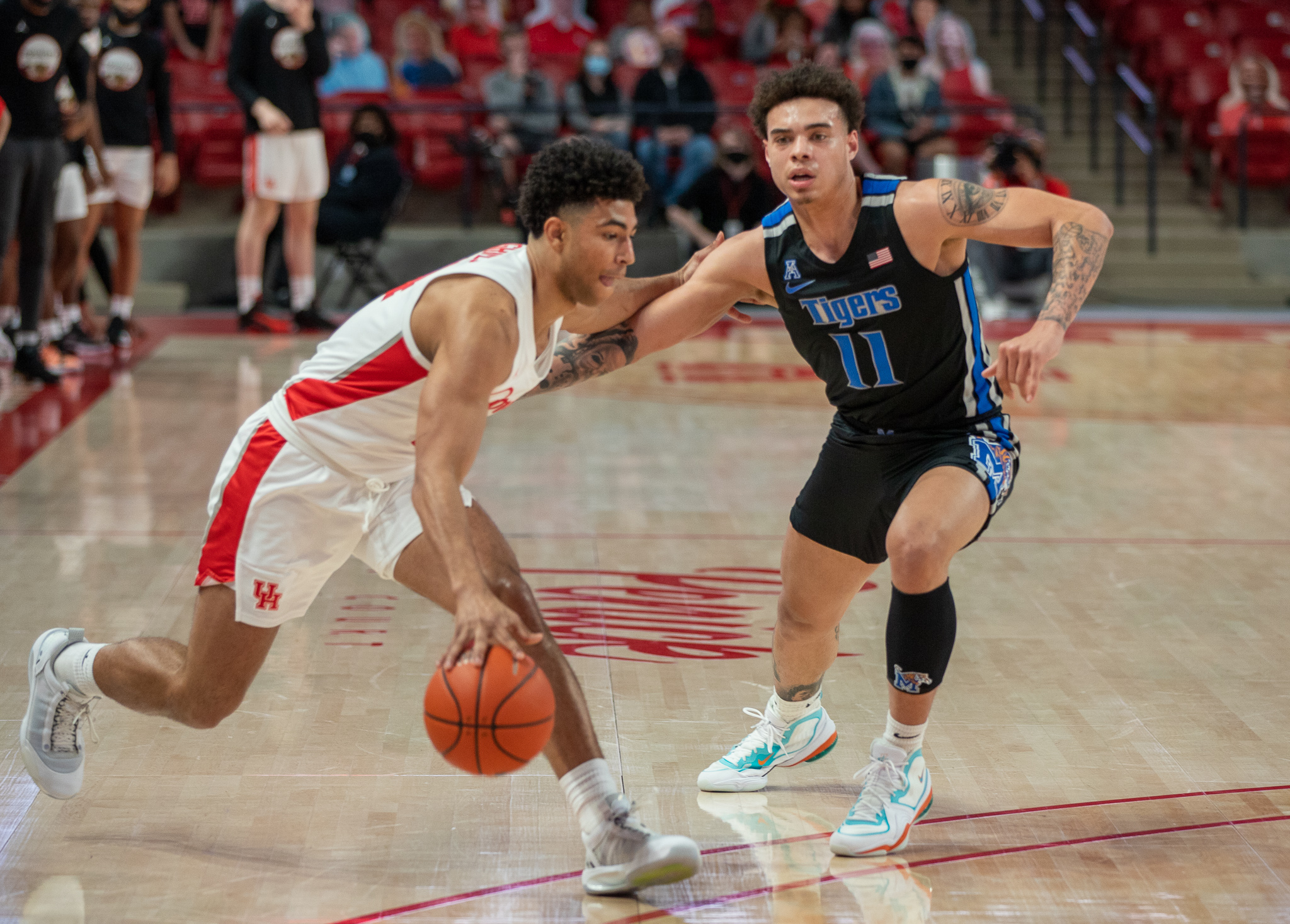 Surrounded by a small group of friends and family on draft night, former University of Houston men’s basketball guard Quentin Grimes waited for his name to be called. To his right sat his mother, Tonja Stelly, and to his left sat his father, Marshall Grimes.

First came the jingle, and then vibrating off the walls of Grimes’ draft party came NBA Commissioner Adam Silver’s voice.

The room around him quickly erupted at the sound of the words, but for Grimes, an overflow of emotions rushed through his body. He lowered his head into his hands, and his mother did the same. The two cried after a long journey had culminated with a first-round selection in the 2021 NBA Draft. A journey that Grimes would not change even if he could.

“Going through what I went through my freshman year, playing through adversity and coming out on the other side, having the season I had. …I feel like this was the best outcome for me,” Grimes told reporters on Friday.

From a distance, University of Houston head coach Kelvin Sampson watched Grimes and his family enjoy the moment of getting drafted. It meant a lot to him too.

“Seeing the joy in his mother and father last night, and knowing his journey, and knowing it was a hard journey, not an easy journey, I think made last night more special,” Sampson said. “We invested so much in each other.”

Before Grimes ever envisioned going to the New York Knicks, who acquired the 25th overall pick from the Clippers as a part of draft-night deal, he had to overcome a significant amount of adversity, Sampson told reporters on Friday afternoon.

When Grimes first arrived at the UH campus, Sampson said The Woodlands native could not tell if he was going to be pitching or catching.

“If I told Quentin to run through a brick wall his first year, he probably would have looked for a way to get around it,” Sampson said.

Already transferring late to the program in 2019 after leaving Kansas following a difficult freshman season, Sampson said Grimes had to get past multiple hurdles before he began to see success on a consistent basis, one of which was his confidence.

“Quentin doesn’t like letting people down,” Sampson said. “…If he feels like he let you down, it bothers him.”

Grimes’ first season with the Cougars was not bad. He showed flashes of potential, Sampson said, but they were often followed by moments of frustration.

A game that came to mind for the long-time head coach was one against South Carolina early in the 2019-20 season.

Grimes finished with 24 points on 4-of-7 shooting on 3-pointers, but he also committed seven turnovers. It was like he had a reversible jersey on, Sampson said. One for Houston and the other for South Carolina.

Through the growing pains, Grimes slowly began to embrace the UH culture and also develop a stronger confidence about himself, Sampson said. The turning point, however, came in the final game of the 2019-20 season in a home contest against Memphis.

With his sophomore year coming to a close, it seemed like Grimes was putting the pieces of his own puzzle in place, but had not solved it yet. That was until a game against the Tigers on March 8, 2020.

UH found itself in a back-and-forth slugfest with Memphis when Grimes hit a 3-pointer just under the 10-minute mark of the second half to put the Cougars up by one. That basket spurred what ended up being a scoring flurry, tallying 15 points in the final 9:24 of the contest, which helped put Houston over the top.

“That’s who he is,” Memphis head coach Penny Hardaway, who trained with Grimes leading up to the 2021 NBA Draft, said after the game. “That’s what he’s capable of being on a nightly basis. He’s a talented kid. McDonald’s All-American that understands the pressure of a game like that on a nightly basis.”

From that point forward, Grimes had a swagger about him, Sampson said.

Entering his junior season, Grimes was not only committed to the UH program, but he also made sure to make it his own, Sampson said.

“I trusted that kid and in turn, he trusted us,” the UH head coach said.

When the 2020-21 season began, Sampson learned early on that Grimes was going to be drafted by some team in the NBA Draft, he said. Sampson just didn’t know how high.

Time after time, Grimes continued to leave his mark on the Cougars’ season. He led the team in scoring with nearly 18 points a game. He was second on the team in rebounding, and third on the team in 3-point shooting percentage.

He also earned several distinctions, including being named the 2020-21 Co-American Athletic Conference Player of the Year and making the 2021 NCAA Midwest Regional All-Tournament Team.

To top all that off, Grimes also earned the reputation of being UH’s go-to scorer in the clutch, Sampson said.

During a game in the 2021 AAC Tournament, also against Memphis, Grimes scored 14 points under the 10-minute mark in the second half to help push UH to the finish line with a win.

Against Rutgers, after Grimes missed two free throws, UH got an offensive rebound and the ball found his hands again. He raised up for a 3-pointer instead that found the bottom of the net late in the game during the absurd second-round comeback in the NCAA Tournament.

And once again in the Elite Eight against Oregon State, Grimes scored seven points in the final 3:30 of the contest to ice the matchup.

The string of performances all season long led him to earning the nickname of “Big Shot Q” from Sampson.

“When we needed a big basket, Ole’ Quentin would rise up and stick it,” Sampson said.

Path to the first round

Despite all the accolades and achievements in his junior season, Grimes’ landing spot in the draft was still unclear, Sampson said. That was until the NBA Draft Combine in Chicago.

During that same time, Sampson was out on a recruiting trip when suddenly, the Pembroke, North Carolina native’s phone began to blow up with notifications from contacts he had made during his stint in the NBA.

People from the Brooklyn Nets, Denver Nuggets, Utah Jazz, Orlando Magic and Houston Rockets all reached out to Sampson to inquire about Grimes, the head coach said.

Once the day of the NBA Draft arrived, Sampson knew Grimes was likely to be a first round pick, he said. Two teams that were eyeing the guard were the Denver Nuggets and the Utah Jazz, Sampson said.

Once the draft order reached the 20s, Bowman passed the phone to Sampson. On the call was Knicks general manager Scott Perry, who wanted to talk to him.

Perry told Sampson if it all worked out, the Knicks were going to take Grimes at 25. Originally holding picks 19 and 21, New York purposefully traded those picks with the intention to select Grimes in mind, Sampson said.

“It was specifically to get Quentin Grimes because that was Tom Thibodeau’s guy,” Sampson said.

Now officially a member of the Knicks, Sampson said he believes Grimes will be ready for the NBA level, especially on defense, which is why Thibodeau saw him as a fit.

As for Grimes, he believes he is suited for Thibodeau and the Knicks as well.

“I feel it’s a match made in heaven,” Grimes said. “[The fans] can be on you, but it’s for the best. I definitely want to be part of it in New York. I know they got something special going.”